What to Do When You Feel Stuck in Life

What to Do When You Feel Stuck in Life

I was alone, or at least I felt that way. Women huddled in happy clusters chatting about first one thing and then another. Some propped babies on their hips. Others clutched Bibles in their hands. Most wore smiles on their faces. I wore one too. But it wasn’t a reflection of what was in my heart. The upturned lips were simply the camouflage I wore to blend in—to avoid being found out. What I really wanted to do was run and hide. On the outside I was a well-put-together church mom with trendy shoes and snappy jeans, but on the inside I was a little girl cowering in the far recesses of the playground hoping no one would notice my reluctance to join in.

What’s wrong with me? I wondered. Why don’t I feel the joy these other women feel? What holds me back from experiencing the confidence and assurance they seem to experience? Where is that abundant life Jesus talked about? Why do I feel like I’m wandering around in a maze trying to find a way out of these feelings of inadequacy?

The problem was, I was stuck. Yes, I had professed Jesus as my Lord and Savior. I knew Christ had set me free, but honestly, I couldn’t tell you exactly what He had set me free from. He had set me free from the penalty of sin and spending eternity in hell. I got that. But I had a niggling feeling that was not what Jesus meant when He said, “You will know the truth, and the truth will set you free” (John 8:32). I had a hunch He meant something more than heaven when He said, “I have come that they may have life, and have it to the full” (John 10:10). That sounded earthy to me.

My early years in the faith were filled with wonder, expectancy, and downright giddiness. But somewhere along the line, I had settled into being a good church girl—a Bible-study mom who moved into cul-de-sac Christianity, pitched my lawn chair under a shade tree, and waved at other well-mannered believers doing the same. Year after year I hoped, Maybe this will be the Bible study that will make it all better. And the truth is, I didn’t even know what the “it” was.

What do you do when your walk becomes a crawl? When you feel like you are a disappointment to yourself and to God? When spiritual chronic fatigue leaves you wondering if it’s all worth it? What do you do when you realize your once passionate faith has morphed into the safe confines of a predictable, domesticated belief system, far away from “Go ye therefore” and “Greater things than these”?

Sometimes the gap between the faith we long for and the faith we experience seems vast, beyond bridging. We stand on the east ledge of the great expanse, thinking the west rim is out of reach or possibly not worth the effort. We think going from where we are to where we want to be is impossible, implausible, or unrealistic, so we pull up a lounge chair in the land of in-between and settle in. Content, but not really. Longing, but not quite enough. Satisfied, but not completely. We settle for reading about the adventures of others and secretly wonder if they are on the up-and-up. We read about the bold faith of others and think, Good for them. We make peace with passivity because we falsely believe God would never want to use the likes of us anyway.

I’d hazard a guess that most believers don’t really want to venture out of the land of in-between. Given the choice, they wouldn’t go back to the Egypt of their life before Christ, but at the same time, they don’t really want to get their shoes messy and step into the unknown, unabridged faith of Promised Land living. They aren’t particularly motivated to move beyond weekend visits with God, as if they’re a kid whose parents have shared custody. They’re satisfied circling in the wilderness; after all, it’s certainly better than Egypt. They’re satisfied with a bit of manna and a splash of water every now and then. There is heaven to come. Yes, at least there is that. And that’s enough.

But I’m not that person. I’m hoping you’re not either.

How do we move beyond the safe confines of cul-de-sac Christianity and into the mountain-moving, giant-slaying, lame-man-leaping, adventurous faith? How do we stop circling in the wilderness of unbelief and make our way into the Promised Land of peace, purpose, and a passionate faith? How do we consistently access the power of God’s promises and boldly believe the truth? How do we stop being held hostage by feelings of inferiority, insecurity, and inadequacy and take hold of the confidence and courage to live bold and do all God has planned for us to do and be all God has created us to be? How do we move beyond knowing the truth to actually believing it?

Jesus said, “I am the way and the truth and the life” (John 14:6). He wasn’t simply speaking of the eternal life we receive when we leave this earth but the fullness and freedom we can experience in the here and now when we take hold of all He has taken hold of for us. 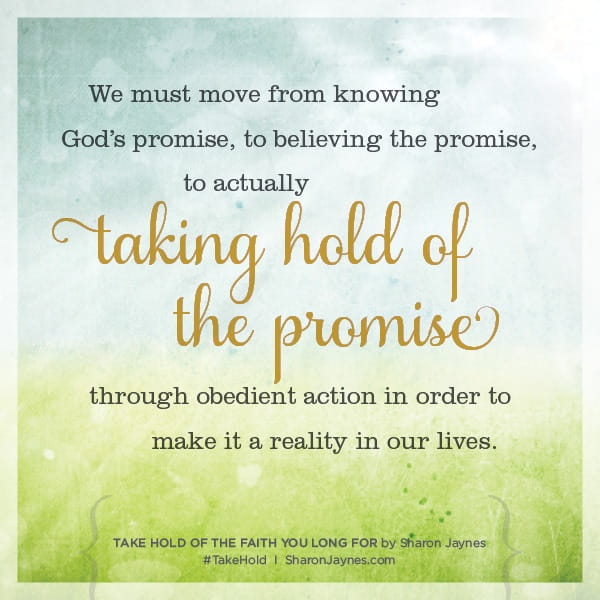 Excerpted from Take Hold of the Faith You Long For by Sharon Jaynes. Baker Books, a division of Baker Publishing Group, 2016. Used by permission. www.BakerPublishingGroup.com.

Sharon Jaynes has been encouraging and equipping women through ministry for over thirty years. Former vice president of Proverbs 31 Ministries and cohost for their daily radio feature, she is the author of eighteen books. She has written articles and devotions for publications such as Focus on the Family, E-women, Decision, P31 Woman, Just Between Us, Christian Financial Concepts, Crosswalk.com, and In Touch. A frequent guest on radio and television programs such as Revive Our Hearts with Nancy Leigh DeMoss, Family Life Today with Dennis Rainey, and Focus on the Family with Jim Daly, Sharon speaks at women's conferences and events all across the US, Canada, Mexico, and South America. She makes her home in North Carolina, with her husband, Steve. Learn more at www.sharonjaynes.com.