What You Need to Know about the Holy Spirit

What You Need to Know about the Holy Spirit

One tragedy of prolonged debates over the spiritual gifts is that the gifts can become more important than the Giver. Above all, the greatest gift that Christ gives in his ascension is the Spirit himself. For our salvation the Father gave his two greatest gifts, John Owen observed. “The one was the giving of his Son for them and the other was the giving of his Spirit unto them. . . . To these heads may all the promises of God be reduced.”2 And now, in applying redemption, “there is no good communicated unto us from God but it is bestowed on us or wrought in us by the Holy Ghost.”3

It is the Holy Spirit’s presence within us that brings about our “amen!” of faith to the word and that defines the age in which we are now living as “these last days.” We were chosen by “God the Father, in the sanctification of the Spirit, for obedience to Jesus Christ and for sprinkling with his blood” (1 Pet 1:2 ESV, emphasis added). The Holy Spirit broods over the darkness and void of our heart, “cherishing the confused mass,”4 as he infuses life into us. Only in this case, unlike the first creation the chaos is not merely raw material waiting to be shaped but is a whirlpool of idolatry and immorality. Thus the new creation is more astonishing than the first. The triune God creates a new world this time not out of nothing but out of sin and death, not only without assistance but in the face of hostility from the creatures he made in his image. It is the Spirit who completes the salvation accomplished by the Father in the Son. He prepares a natural body for the Son and then, as we will see in chapter 10, forms an ecclesial body for Christ. The Spirit is the Lord, who makes us sharers in the new creation by uniting us to our glorified Head and indwelling us as the deposit on our final salvation. The Spirit who made the Son the door of salvation now opens the door of our hearts to embrace Christ with all of his benefits (cf. Acts 16:14).

I have argued that Jesus’s reference to the Holy Spirit as paraklētos hails from the language of the courtroom. Precisely because he is an advocate or attorney, the Spirit is also a comforter who comes to our defense. But the Spirit is another advocate because whereas Jesus came alongside us, as one of us, in the place of us, and intercedes for us now in heaven, the Spirit exercises his advocacy within us, convicting us of guilt and assuring us of our election, justification, and adoption. He is the attorney who offers himself as the surety or deposit on our glorification. And on the basis of this judicial work within us here and now, fastening our faith on the judicial work that Christ accomplished for us in history, the Spirit begins his powerful work of renovation, conforming us more and more to Christ’s image. Thus the entire golden chain of salvation from election to glorification is comprehended under the broader rubric that all good gifts come from the Father, in the Son, through the Spirit. The Spirit’s intimate presence is the basis for Jesus’s assurance that he will not leave his disciples as orphans in the world. Despite the world’s hostility Christ has overcome the world, and they too will be overcomers in him through the power of the Spirit in spite of their temporal insecurity (John 16:33). Both divine persons are paraklētoi in both senses, as advocate-comforters, but in different ways due to their different persons and therefore operations. What then does the Spirit seal? We turn now to the Spirit’s application of redemption to the elect: the ordo salutis. Just as there is a historical progression from the initial promise of salvation in Genesis 3:15 to the incarnation and, eventually, the consummation, there is a logical golden chain leading from election in eternity past to redemption, justification, adoption, sanctification, and glorification. “And those whom he predestined he also called, and those whom he called he also justified, and those whom he justified he also glorified” (Rom 8:30 ESV).

The Spirit is our first contact with the Holy Trinity,5 bringing us to our adopted Father by uniting us to the Son. “The Eternal and Ever-blessed God comes into vital touch with the creature by an act proceeding not from the Father nor from the Son, but from the Holy Spirit,” writes Kuyper.6 To be sure, it is always the Father, in the Son, who meets us through the Spirit. Yet “Christ never entered into a human person. He took upon Himself our human nature, with which He united Himself much more closely than the Holy Spirit does; but He did not touch the inward man and his hidden personality.”7 This should not surprise us when we know already that “the Spirit of God moves upon the face of the waters, that He brings forth the host of heaven and earth, ordered, animated, and resplendent.” But he enters the very precincts of the human heart.8 Thus his disciples only knew Jesus after Pentecost in the way that all believers have ever since: after the Spirit, not merely as rabbi and master but as the eschatological head of his body. Throughout its liturgy, especially in its focus on Christ and the Father through him, the church is always crying, “Veni, Creator Spiritus” (“Come, Holy Spirit, Creator!”). “There is always the same deep thought: the Father remains outside of the creature; the Son touches him outwardly; by the Holy Spirit the divine life touches him directly in his inward being.”9

For those who are “dead in trespasses and sins” (Eph 2:1 ESV), nothing short of regeneration will do: “Even when we were dead in our trespasses, [he] made us alive together with Christ—by grace you have been saved” (v. 5 ESV). The old Adam is not merely wayward, requiring better advice and habits. The condition is dire: “The natural person does not accept the things of the Spirit of God, for they are folly to him, and he is not able to understand them because they are spiritually discerned” (1 Cor 2:14). Jesus referred to the Holy Spirit, “even the Spirit of truth, whom the world cannot receive,” but who indwells his elect (John 14:17). Apart from regeneration, we cannot even repent and believe in Christ (John 3:5; 6:44); even faith is a gift (Eph 2:8–9). The Spirit does not enter hearts that prepare him room or sweep the floor and dust before his arrival (an optimistic set of tasks to expect of the dead); rather, he enters, hovers, infuses life, gives faith, and begins immediately to renovate the mansion in which he once breathed merely the natural (i.e., biological) life but now breathes the breath of eschatological—new creation—life.

4. I am referring to Calvin’s description of the Spirit’s activity in brooding over the waters, cited in chapter 2.

Taken from Rediscovering the Holy Spirit by Michael Horton. Copyright © 2017 by Zondervan. Used by permission of Zondervan. www.zondervan.com. 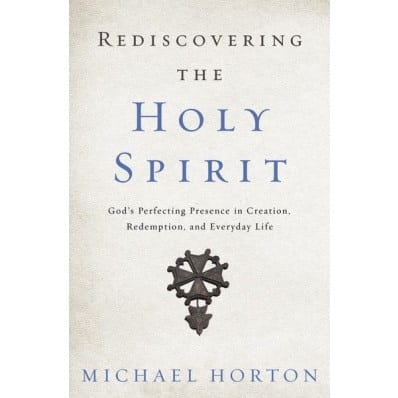 Michael Horton (PhD, DD) is Professor of Systematic Theology and Apologetics at Westminster Seminary California. Author of many books, including The Christian Faith: A Systematic Theology for Pilgrims on the Way, he also hosts the White Horse Inn radio program. He lives with his wife, Lisa, and four children in Escondido, California.