Why and How Should I Welcome Immigrants and Refugees?

Why and How Should I Welcome Immigrants and Refugees?

My heart for immigrants and refugees was molded when my parents decided to become sponsors for a Vietnamese family after the fall of Saigon.

The summer of 1975 I spent part of my birthday watching the airport tarmac, waiting for the arrival of a young couple who would spend the next six months living with our family and adjusting to their new life in the United States.

What we didn’t know beforehand is that the two guests would quickly become three—with the birth of their firstborn son two weeks after Man and Tin arrived. Then three became seven when Man’s sister and husband and two children spent a month in our home after moving from another state to be closer to their family.

These first families that lived with us were strong believers—Tin was the son of a pastor—all fleeing the coming wave of persecution. We shared a close bond even when their English was sparse.

Several years later, another Vietnamese family who had never heard of Jesus Christ came to stay in our home. We introduced them to our Christian Vietnamese friends and, before they left to settle in another state, they too had come to faith in Christ.

Not everyone can bring a whole family into their home to live. But each of us can have a heart and mind to bless the foreigners and the strangers that God has brought to our shores.

God’s special heart for immigrants and refugees shows up throughout the Scriptures. From the beginning, God commanded the Israelites to show special care to aliens, foreigners, and strangers—that is, to those who lived among them and were separated from their country of origin.

These people weren’t in a position to enjoy the same rights and resources as they had in their own nation. Still, they were to be cared for just as much as Israel’s widows and orphans (Exodus 22:21 and Exodus 23:9). 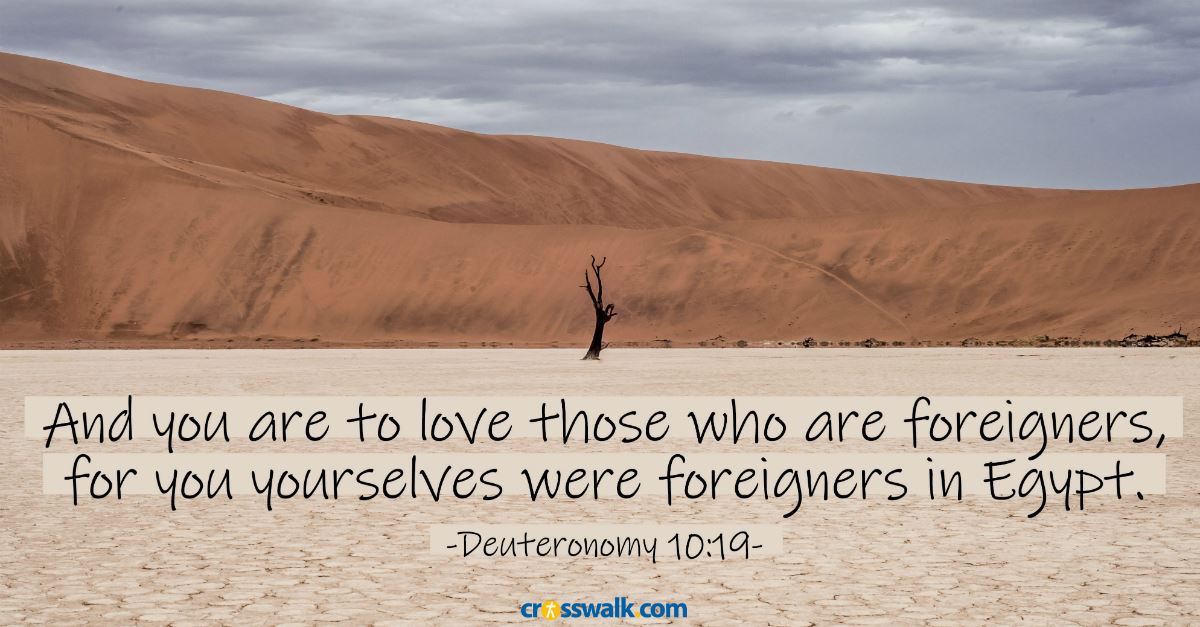 God reminded the Israelites to remember how it felt to be aliens in Egypt, and commanded them to show His compassion and love (Deuteronomy 10:19). They were never to adopt the false religions of the foreigners, but God also warned His people not to mistreat them (Jeremiah 7:5-7).

The early church found itself embracing many immigrants starting with the day of Pentecost and continuing as Christians fled persecution and left their own countries to advance the kingdom of God.

Ask God to Enlarge Your Heart

Even if you are not specifically involved in an ongoing ministry, it’s still important to have a heart for the foreigner. Allof us have our comfort zones, but feeling comfortable is not the goal when it comes to reaching people for Jesus Christ.

Some people just gravitate more naturally to people of other cultures, and some are specifically called to that ministry. But God wants each one of us to love our neighbors—even our non-English-speaking neighbors—as ourselves.

Ask God to show you your prejudices and change them. If you don’t have an interest in people of other cultures, ask God to help you develop one. You don’t have to produce it on your own; ask God to give you a heart for people of different races and cultures.

Many years ago my husband and I visited the Saudi Arabian exhibit at a World’s Fair. Even before leaving the oppressive atmosphere of the exhibit, I determined that ministering to Muslims wasn’t in my future. Let other people with different hearts reach out to these lost people—I didn’t want anything to do with them.

Within a year, however, God changed my prejudiced heart.

Ask God to Lead You to Who to Befriend

My husband and I wanted to befriend international students, so one Friday evening we visited the international Christian coffeehouse at a nearby university. As soon as we walked in, a friend motioned us over to where he was sitting with a Muslim couple in traditional dress. We chatted and found out that Hamid and Fatima were Muslims from Saudi Arabia!

Despite my former vow, we pursued what was obviously a divine appointment. Hamid and Fatima’s relatives had rebuked them for not having any American friends. When they met us, they were thrilled to meet another couple with children.

We began to spend time together as friends. That winter we took their family inner-tubing in the mountains. One summer we spent a delightful day at the beach. Throughout each year we ate American meals together and gladly enjoyed Fatima’s wonderful Arabic cooking.

Through this friendship, we began to see them not simply as Muslims but as unique individuals. When we began to love them, our attitude toward other people like them changed too. God gave me a new heart for Muslims and taught me to ask Him to continually cleanse my heart of prejudice.

Will you ask the Lord to enlarge your heart toward refugees, immigrants, and foreigners? Will you ask Him to bring across your path the ones He desires for you to meet?

Begin with Immigrants in Your Community

To begin exploring how God would use you in reaching immigrants, start by asking a simple question that Mr. Rogers used to ask in song, “Who are the people in my neighborhood?”

Start noticing people at the store. If you live in the city, take public transportation. Read about local events in the newspaper. Whether it’s the annual Polish Dinner or the Cinco de Mayo celebration, events such as these are due to a strong ethnic community.

People come to this country from many different cultural experiences and are obviously not all the same. For this reason, it’s wise to ask God for focus when ministering to immigrants and refugees. The United Nations and Wikipedia report that more than 47 million foreign-born people live in the United States. Think of all the possibilities!

Ask yourself, To which ethnic group do I feel most drawn? Which group does God seem to be bringing into my life?

Learn about Other People and Cultures

To learn about people from other countries, read books and articles on the subject. You could even host an exchange student. The important thing is to learn people’s cultural values and look for ways to best communicate the Gospel of Jesus Christ to them.

When working with immigrants and refugees, you will want to determine if individuals are more interested in hanging on to their cultural identity or quickly assimilating into America. The goal is to introduce them to “heavenly citizenship,” but first you must understand their motives and desires. This will help you minister to them more effectively.

Be on the lookout for cultural differences that might be an obstacle—or a bridge—to sharing your faith. In our friendship with our Muslim friends, we were always careful to serve chicken or beef, since they are not allowed to eat pork.

Sometimes knowing a person’s religious background can be an opportunity. Because I had read that Islam values the holy writings, I invited Fatima to do a study of the Qur’an that also involved learning from the Bible. I learned a lot about Islam as I read the Qur’an, and Fatima read from the Bible and asked questions that had never crossed her mind before.

What gifts do you have that you could share with immigrants and refugees?

Contact the public schools where you can volunteer to tutor new immigrant or refugee students or help with their adjustments.

Our older son began tutoring a Vietnamese boy from the neighborhood. Through that, we established a relationship with his mom. We got to know them and remained friends for many years.

Look for local ethnic churches and join them in their outreach efforts. Many times this involves simple support as they welcome friends and relatives to this country. One woman I know teaches English as a second language to students in a church in another part of her city (Matt 25:35). 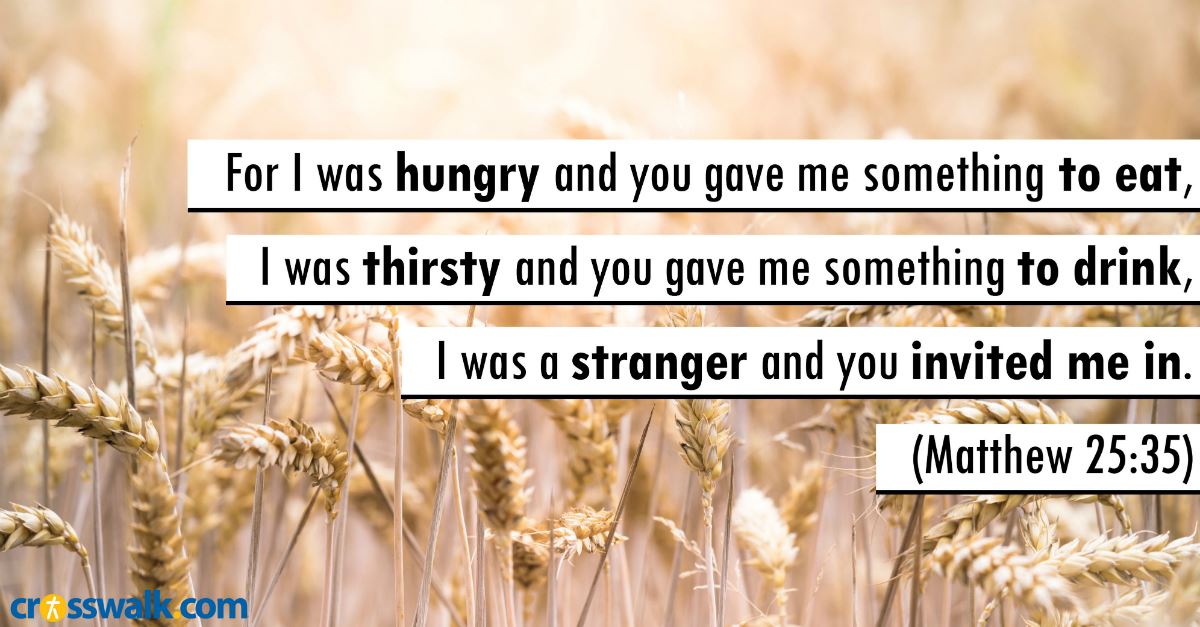 Involve Your Family in Welcoming Immigrants and Refugees

More than any service you could provide, a new immigrant or refugee is most blessed by your kindness and friendship. The lives of a loving, Christian family are a powerful witness to the Good News of Jesus Christ. Invite your immigrant friends home for a meal and accept their invitation to their home as well.

Children are a powerful bridge to relationships with other people—especially immigrant families. Hamid and Fatima chose to become our friends primarily because we had children. Parents of all nationalities care deeply for their children, and they respond when other people care for their children as well. Inviting children to special activities, programs, and summer camps is natural when they have spent time with your children in your home.

Best of all, your children will gain a perspective of God’s love for all people. While you need to be sensitive to how much your family members want to be involved in reaching out to immigrants and refugees, just spending time with people of other races and cultures will broaden their minds and hearts.

In what family activity could you easily incorporate an immigrant or refugee family? Choose a date for inviting someone to dinner who is new to your country and community. Teach your children how to befriend people from other countries, and encourage them to reach out to new classmates.

The felt need of many immigrants is to acclimate to the United States. Most people coming to this country are eager to adapt, and they are grateful for any way we can help them do that. But it’s important to distinguish between sharing our culture and sharing our faith. This isn’t easy because often we don’t stop to think about the difference.

Remember the goal—heavenly citizenship—is more important than American citizenship. Don’t let your patriotism or lack thereof get in the way of your relationship. Remember, what they think about the United States is not nearly as important as what they eventually think about Jesus Christ.

On the other hand, American holidays can be great opportunities to share the true Christian message. When you celebrate Thanksgiving, Christmas, and Easter, tell the simple story behind each holiday and give a clear presentation of the Good News.

It is helpful to differentiate between how the American culture celebrates a holiday and how Christians celebrate the same holiday from the heart. Much of this will be new to people from other countries that view all Americans as Christians.

Inviting a person to church can be like inviting her into yet another culture. It’s probably not the most effective first step in evangelizing immigrants or refugees. If you do bring your foreign-born friend to church with you, think of it as simply a “taste” to pique her curiosity and whet her appetite for a faith community. Make sure your church family knows how to welcome visitors who may not speak English very well yet.

As you open your eyes to the world around you, be prepared for God to enlarge your world and your heart through the people He brings into your life. Let the adventure begin!

Renée Sanford is a wife, mother, grandmother, and friend to many. Over the years, Renée has demonstrated a passion for encouraging women over a cup of coffee or tea (any time!) and when she speaks (including her popular “Home for the Holidays” message). Among her many publishing credits, Renée is the general editor of Focus on the Family’s best-selling book, Handbook on Thriving as an Adoptive Family (Tyndale House Publishers). You can write to her at sanfordrenee@gmail.com.