How Failure Forced Me to Focus on My Faith

How Failure Forced Me to Focus on My Faith

The worst feeling crept up on me as I watched the curtains close for the intermission of a Lion King production in Australia. The pain was tangible, as if I had been stabbed and I couldn’t catch my breath.

Something terrible just happened to my business.

I don’t know how I knew it, but I did. It was a sinking feeling that something was going on with my business partner, Shane (name has been changed).

Up until that point, I had been enjoying the most remarkable vacation of my life with my wife, Jeannine, celebrating her one-year recovery from breast cancer. We had no idea that our toughest financial trial would follow so quickly on the heels of our hardest health trial.

I only had 15 minutes before Lion King started again, so I called up Shane in St. Louis.

No answer. Where could he be?

Shane and I had just spent the last 15 months developing the business plan and marketing for a product we were both excited about, an oak-aged pure cane cola called Shane Baril. We had visited top executives at Coca Cola who loved the concept. Impressive accomplishments backed up our work - Shane as one of the “Top 100 Brand” executives in the U.S., and myself as a twice-recognized Inc. 500 entrepreneur.

We finally had the bottle made, the cola formulated, the offering documents prepared, and were ready for an investor meeting. A handmade miniature wooden delivery truck went to prospective investors promising delivery would begin soon. A room at the Ritz Carlton awaited our big presentation, coming up in just two weeks. 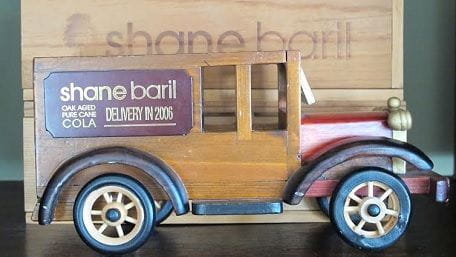 Our cola concept was almost reality. It could not have been going better.

What happened next would defy all logic.

When I finally got a hold of my business partner, he told me he had abandoned our business to take a high-profile job in New York.

“I can’t even tell you why I did it,” Shane said when he called me back. “I guess I’m not a small business person.”

I didn’t know what to say. Shane and I had worked together almost every day for more than a year, had prayed continually, laughed often, and had become best friends as couples. But when he decided to take that New York job, he didn’t even call me. There was no way to face the investors after Shane left. How could they support something my own business partner hadn’t believed in? The entire cola concept collapsed.

I had been so convinced that this new company would launch that I hadn’t pursued new business for my agency in over a year. It failed too!

Once again, Jeannine and I sought God as never before. We had no idea that the recovery from the business loss would be as prolonged and as severe as it was. During my wife’s battle with breast cancer, we learned what it meant to tackle adversity as a couple. There were sweet times where we came together as never before in love, faith, and resolve. So it was with this trial as well.

The business drought lasted for years. During this time we downsized our home, moved to the country, started a church, and learned some powerful life lessons on dealing with this kind of failure.

1. Know who you are: Never let your ego get so close to your career that your identity depends on your success. Who you are is not what you do. Don’t believe your doubts. Believe your beliefs! “For this reason I was born...that I should bear witness to the truth” (John 18:37).

2. Quit trying to figure it all out: Things will go wrong and people will let you down. Many times you won’t know the true motivations behind a bad situation, just like I couldn’t figure out why my business partner abandoned our dream project. Don’t lose your heart. Sometimes the greatest freedom is found in the graceful act of forgiving others.

3. You can’t be both joyful and stressed out. One steals from the other, so choose joy! In Philippians 4:6-7, the Apostle Paul says stop being anxious. It’s stated in the imperative form, as if Paul is saying, “Stop worrying. I’m not kidding, quit freaking out!” Paul says stop worrying (verse 6), start praying (verse 6), and receive peace (verse 7).

4. Focus on what’s important vs. today’s problems. Most of the problems going on today won’t matter a year from now. Know what’s important, which will stop you from worrying about the other stuff.

5. Refocus from failure to that thing you love to do. Focus on the one thing that is your heart’s desire, the one thing that will make a difference.That ‘why’ is your source of passion; it empowers you to be genuine to who you are. God says, “I have this against you, that you have left your first love” (Revelation 2:4 NKJV).

So where am I now?

That failure was so tough that it forced me to focus on my faith, my purpose, and my passion.

Faith has always been important to me. And my #1 passion is helping entrepreneurs build remarkable companies. That’s why I combined the two to start Faith Driven Business. I wanted to help entrepreneurs who were facing the same struggles I had endured, and pass on what I had learned along the way.

Sometimes it’s a hard journey. Sometimes you’ll cry out to God in desperation and ask what happened to your dream. But don’t confuse one failed business idea with a failed life. Find your passion again and use it.

A version of this piece originally appeared at Faith Driven Business. Used with permission.

Steve Hoeft is the Founder and CEO of Faith Driven Business. He took his marketing agency to the Inc. 500 fastest growing private companies – twice! Steve started Faith Driven Businesss to help entrepreneurs build awesome businesses while growing spiritually. Recently Steve authored “The 7 Attributes of Highly Effective Godly Leaders” free report and launched an online curriculum for entrepreneurs. Find out more about Steve and his company at FaithDrivenBusiness.com or on Twitter.