How to Get More Out of Less

How to Get More Out of Less

Minimalism: the intentional promotion of the things we most value and the removal of anything that distracts us from them.

Finding the life we want isn’t about giving up everything. Nor is it about holding on to everything and just trying to organize it better. Instead, it’s about reducing the number of our possessions to a level that sets us free.

When my wife and I began decluttering our home and removing the nonessentials, I would often remark to her, “This is fantastic. Owning less stuff is so freeing! I wonder why nobody ever told me about this before?”

Before long, though, I started to catch myself. Was it really that nobody had ever told me about minimalism before? Or was it that I just hadn’t been listening?

In my head, I began recounting the sermons I had heard preached about the spiritual dangers of materialism. And beyond that, throughout my life, I had read and heard dozens of challenges to reject the empty promises of consumerism and to follow a way based on higher values.

I began to do research and discovered that minimalism is not a new movement at all. Whether specifically labeled as minimalism or not, it has been practiced and encouraged for thousands of years — well before our current society of mass-produced goods, well before suburbanization, and even well before the Industrial Revolution. Under all kinds of economic conditions, minimalism has been promoted as a rewarding way of life.

Today, we recognize some of the people in recent centuries who have encouraged this approach to life, including Henry David Thoreau and John Ruskin. I even hear them referred to as the “fathers of the minimalist movement.” But minimalism predates all of them — by a long shot. The minimalist lifestyle may be gaining in popularity today, but it is anything but new.

Living with less has always been freeing and life giving, filling people with hope and purpose. It has enabled human beings to expand in spirit and to live as more than mere accumulators of possessions. And therefore minimalism is not a brand-new approach to life invented as a response to our overproduction of consumer goods. Quite the contrary. Our most trusted spiritual leaders have promoted it for centuries.

Including the person who has shaped my worldview more than any other: Jesus.

At one point early in Jesus’s teaching years, a young official approached him with a question that could hardly have been more weighty and consequential. “Good Teacher,” he asked Jesus, “what must I do to deserve eternal life?”

Jesus’s response came as a surprise and a shock to everyone. He said, “Sell everything you own and give it away to the poor. You will have riches in heaven. Then come, follow me.”

The historian of this scene commented, “This was the last thing the official expected to hear. He was very rich and became terribly sad. He was holding on tight to a lot of things and not about to let them go.”1

Spirituality has shaped my pursuit and definition of minimalism. But minimalism has also shone a new light for me on some important spiritual teachings I have been familiar with for years. This one in particular.

You see, I used to read what Jesus said here about giving away possessions and money, then think, That sounds like a recipe for a miserable life. Could that really be what he meant? In a world that often defines happiness in terms of the amount of stuff we can accumulate, Jesus’s instruction doesn’t make sense. On good days, I would add this rationale: Maybe if I sacrifice my stuff on earth today, I will receive rewards when I get to heaven. This must be the trade-off Jesus had in mind.

But this thinking doesn’t line up with other things Jesus said. For example, at one point Jesus stated, “I came so [you] can have real . . . life, more and better life than [you] ever dreamed of.”2 Jesus’s teaching was always about getting the most out of every day of our lives on earth as well as into eternity.

However, as my family and I began to minimize our possessions and experience all of the benefits listed above, Jesus’s words to the rich young official began to make new sense to me. Jesus was saying, “Sell your possessions and give to the poor because your things are an unnecessary burden to you! They are keeping you from experiencing the eternal, abundant life you are asking me about. Own less stuff. Your things are keeping you from becoming all that you were intended to become.”

Jesus’s instruction was not so much a test of the man’s faith or a call to superhuman sacrifice as it was a statement of truth. It was an invitation to a better way of life. The man’s possessions were keeping him from truly living! 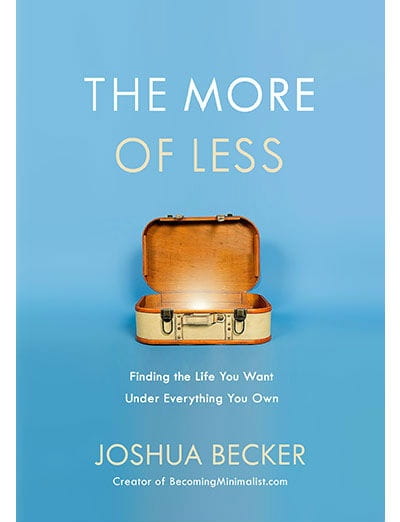 [Editor’s Note: Excerpted from The More of Less by Joshua Becker Copyright © 2016 by Joshua Becker. Excerpted by permission of Waterbrook Press, a division of Penguin Random House, LLC. All rights reserved. No part of this excerpt may be reproduced or reprinted without permission in writing from the publisher.]

Joshua Becker is the founder and editor of  BecomingMinimalist.com, a website that inspires millions around the world to own fewer possessions and find greater fulfillment in life. As one of the leading voices in the modern simplicity movement, Becker speaks both nationally and internationally. He has contributed to articles in Timemagazine, The Wall Street Journal, USA Today and Christianity Today. He is a frequent guest on HuffPost Live and has appeared on numerous television programs, including the CBS Evening News. He and his young family live in Peoria, Arizona.