Resources for Christian relationships all free online at Crosswalk.com! Find Christian based information on situations that arise in any relationship between husband and wife. Learn about how we should treat our spouses according to the word of the Bible and Jesus. Other helpful resource topics include: Christian singles, parenting, finances and debt.
Christian Relationships and Marriage Resources
URGENT: You Can Help Protect Churches from Government Discrimination

The Secret to Fixing Your Marriage

The Secret to Fixing Your Marriage

Several years into our journey of parenting three small children, my wife Mary and I decided to take a long walk together, because there were some unspoken conversations hovering around us that just needed to land. We walked because coffee shops are too loud, and because frankly, I’m better when I’m moving. Maybe Mary’s penetrating gaze threatens me, or maybe the right things move around inside of me when my outsides are also moving.

By mile five, we had both said and heard some very difficult things, but I was feeling OK. I was open and soft. I was ready to listen. I was even a little upbeat. But then she said it. I think I stopped walking. Or maybe I walked faster. I honestly can’t remember. She looked at me and said, “Honey, now I have to say the really hard thing.”

My wife sees and hears things that many people do not. She is frighteningly intuitive, but she is also very kind. She has never used her superhuman ability to see right through me to skewer me. Still, I braced myself.

“For a very long time,” she said, “I have felt like you treat me as if I’m what’s wrong with this relationship. And I need to know if that’s true, or if I’m crazy.”

I wanted to run. Immediately, I began shuffling papers in my mental file, looking for proof that she was wrong. She’s always blaming me, I thought. What about all the years of counseling we’ve paid for? What about all the apologies I’ve given over the years? Are you telling me I’m the worst husband in the world? You’re acting like I’m a monster.

I began to walk faster, but she kept up.

What finally caught up to me was the crushing reality that she was right. I stopped walking and looked down. Then I looked up at her, this woman that I shared my life with, this woman that I loved. I realized that it was convenient for me to treat her like she was the one who was wrong, the one who needed saving, the one who needed help, because I like doing the saving. I like being right. I like swooping in for the rescue. And I hate hearing that I am doing anything wrong. I get defensive every time anyone hints that I may have dropped a ball or failed at anything. And the worst part about it is that I am charming and manipulative enough to make it look like I’m being vulnerable and open when I’m really just trying to do that right, too. I can make you think that you’re wrong, but it’s no big deal, because here I am to help you.

For years, this was our unspoken contract. Mary would be the messed-up one who actually talked about her issues, and I’d be the strong and steady one who fixed stuff and hid my own issues.

On that walk, Mary was saying that our contract no longer worked for her. She was inviting me to let go of our old contract and create a new one. It scared me to death. I realized on that walk that I hated doing it wrong even more than I hated hurting her.

That conversation was hard, but what followed was harder. I began to see that living with me felt like being under pressure. I set up elaborate but unspoken rules about when it was okay to talk about certain things, and when it wasn’t. Even though I’m good at problem solving, sometimes my solutions were bandages that didn’t help, and I offered them just so we could be done talking about whatever it was that I wanted to be done talking about. And I wasn’t listening well. I hurried Mary and sometimes ignored her.

I didn’t have the language for it at the time, but I was standing at a threshold. I was being invited to let go of a harmful way of relating to my wife, so that I could grab onto a different kind of relationship with her entirely.

I was being expanded, and it was good. But it hurt.

These moments are naked and vulnerable, but if we can see them, we have the opportunity to expand. If we miss them, we get to keep being the same person we were yesterday and all the yesterdays before that.

Paulo Coelho (author of The Alchemist) was once asked how he could remain married to the same person after more than thirty years. His response was both wise and immediate:

“I've been married for 35 years. I'm walking here in the countryside now with my wife by my side. And at the end of the day, she is a completely different person, physically and mentally, from the person I married 35 years ago. So am I. But people normally marry, and then they want that locked in time, so they think they're not going to change. We're going to change. Everybody's going to change. So accepting that changes are part of our lives makes marriage a blessing and not a curse, because love is stronger than anything else.”1

You don’t arrive at wholeness in marriage and stay there. As you grow and change, you need to learn new ways of understanding your spouse, who is also growing and changing. Wholeness in marriage is about accepting the reality that you can’t change your spouse, you can only discover new things about them, and about your relationship, and allow those new things to forge a stronger and stronger bond.

The secret to staying married is simple (but not easy): You can’t stay married to the same person forever, because that person doesn’t exist anymore. You can only keep deciding to get to know the person your spouse is becoming, over and over and over again. 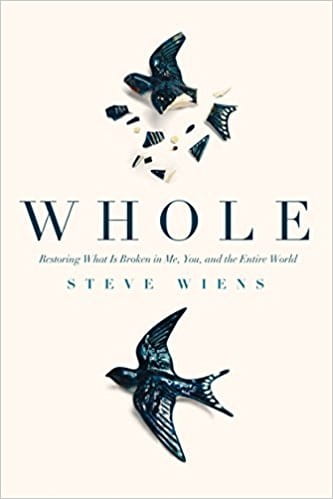 Adapted from Beginnings by Steve Wiens, whose new book WHOLE: Restoring What Is Broken in Me, You, and the Entire World releases in August from NavPress.