Editor's Note: The following is excerpted from the intertextual commentary notes from Paul's Epistle to the Galatians in the NLT Study Bible (Tyndale Publishing House, 2008). Throughout this new study Bible, essays like these enrich the experience of learning while providing extensive prooftexting and cross-referencing. According to the NLT Study Bible team, because the NLT is already so easy to understand, the NLT Study Bible doesn't have to explain the meaning of the text, allowing it to focus on larger issues in the study notes such as the historical and cultural background that adds to understanding the text, and theological implications of the passage.

For Paul, the answer was simple: There is nothing people can or need to do. Only Christ could do - and has done - what must be done to make people acceptable to God. So we should simply receive his gift, gratefully thank him for what he has done for us, and trust in him.

For Jewish Christians in the first century, it was hard to accept this answer. From the time of Abraham, their relationship with God had been defined by circumcision, the rite of cutting off the male foreskin (Genesis 17:9-14). Every male who was part of God's family had to be circumcised, and those who neglected it were cut off from God's people. Those who had received circumcision were also expected to keep the laws regarding the Sabbath and what foods could be eaten, along with the rest of the law.

When the Christian faith moved from the Jewish to the Gentile world, it was natural for questions to arise. Do Christians need to be circumcised - and keep God's law in general - to be accepted as part of God's family? Or does God accept people purely on the basis of their faith in Christ's work on the cross? As Paul's mission to Gentiles advanced, these questions became pressing.

The apostle Peter understood from his vision in Joppa and his experience in Caesarea that God has accepted Gentiles as Gentiles, on the basis of their faith in Christ's finished work (Acts 10:9). They did not have to become Jewish by observing circumcision, for Christ provided them open access to God by faith. Peter and the Jerusalem church therefore welcomed Gentile believers into fellowship. But later, Peter temporarily withdrew from fellowship with Gentiles when some Jewish Christians criticized him (Galatians 2:11-13). In response, Paul rebuked Peter for communicating that Gentiles must become Jews in order to be accepted by God (Galatians 2:14-21).

An enduring question of the Christian faith is, Do Christians need to keep the OT law in order to become mature followers of Christ? Does following God's law provide sanctification?

When the Christians in Galatia had received the Good News of salvation through faith in Christ, they had also received the Holy Spirit as the guarantee of their status as believers. Not only had God given his Spirit to them, but he had also worked miracles among them (Galatians 3:5). They knew from experience that the Holy Spirit has the power to make them new people, and Paul had taught them to rely on the Spirit to guide them.

Shortly after Paul left Galatia, Jewish-Christian teachers arrived who taught the need to observe God's law, both to be accepted by God and to be sanctified and become mature. They argued that Paul's approach to sanctification by the Spirit would lead to lawlessness and sin.

The real problem is not a lack of understanding regarding right and wrong. Our God-given conscience tells us when we're doing wrong, and God's law makes the requirements of his righteousness even clearer (Romans 7:7-12). The real problem is that, by nature, our hearts are hard and sinful, and we lack the wisdom to know the right thing to do in a given situation. By nature, we are unable to apply God's word in a way that is consistent with faith in his love.

The law cannot ameliorate our condition (see "The Limitations of Law" at Rom 7:1-25, p. 1905). But when the Holy Spirit guides and controls us, he changes our hearts and guides us to do the things that please God (Galatians 5:22-23; Romans 8:5-14). God's Spirit guides his people to fulfill his law in its true sense and intent. But fulfillment of the law is not the goal or focus - the law is just our guardian (Galatians 3:24-25). The focus is on trusting God, relying on the Spirit, and loving others. God's Spirit gives us the will and the power to do these things and please God (see also "The Holy Spirit's work" at 1 Cor 12:1-11, p. 1945). 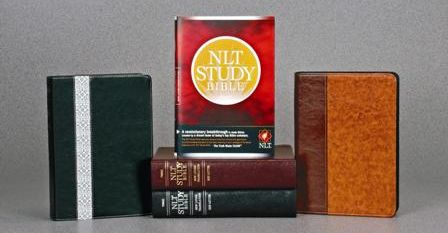 The Bible has always been alive, breathing truth into God's people throughout history. The NLT Study Bible captures that vitality, presenting God's Word with critical insights and features that evoke the "you are there" quality of the original texts. This fresh perspective is the fruit of 7 years' work by 48 renowned scholars whose goal was to craft a Bible that bridges time and culture and ignites a fresh spark of understanding in today's readers. Featuring the clear and accurate New Living Translation, the NLT Study Bible goes beyond textual notations and personal application to illuminate the meaning of the text in its historical and literary context. Engage in serious study that reaches your heart, soul, and mind!