Editor's Note: The following is a report on the practical applications of Bill Perkins' new book, When Good Men Get Angry, (Tyndale House Publishers, 2009).

You can count on feeling angry sometimes in our fallen world.  But if you allow anger to run wild through your mind, it will control your thoughts and behavior, filling your life with its destructive power and hurting people around you. Thanks to your relationship with Jesus, however, you can control your anger so it won’t control you.

When you understand your true identity in Christ – as a good man with access to God’s Spirit to help you overcome sin – you’ll be able to think and act more like Jesus when you get angry.

Here’s how you can learn to manage your anger like Jesus did while He was on earth:

Distinguish between good and bad forms of anger.  Anger is a natural emotion that arises whenever you encounter a situation you perceive to be wrong.  You can either process and express your anger in sinful ways – such as yelling at your wife or driving aggressively – or you can handle anger in ways that fuel a passion to advance God’s kingdom work.  Ask God to help you see situations that make you angry from His perspective, so you’ll learn to recognize the difference between good and bad anger.

Understand your true identity.  Your true identity is in Christ, but when you allow anger to take over your thoughts and behavior, you’re allowing your flesh to steal your identity and define who you are.  When you get angry, remind yourself of who you really are, and pray for the Holy Spirit to empower you to subdue your anger and direct it in the right ways.

Turn to God for the respect you need.  God has wired you as a man to need respect, but that need can become distorted so that any real or perceived act of disrespect can trigger inappropriate anger.  If you’ve got a deficit in your respect bank, you may try to use anger to force others to treat you respectfully, but that will only lead them to disrespect you more.  So whenever you feel anger due to disrespect, refuse to act on your initial impulse to explode in verbal or physical anger.  Instead, remind yourself of how much God loves and respects you (it would help to memorize Bible verses like John 3:16 and John 17:23) and quickly pray for God’s help to act like a man of infinite worth even when you feel otherwise.  Then determine whether the words and actions that have angered you are real or perceived acts of disrespect.  In either case, don’t just react to your anger.  Control your response as God leads you to do so.

Let go of attempts to control others.  People who don’t comply with your wishes can make you mad – from a child who doesn’t do chores to a fellow worker not following your instructions.  But you can’t control other people.  While it’s fine to give people advice, you can’t make them take it.  Since God doesn’t impose His will on others, neither should you.  Ask God to help you respect other people’s freedom to make their own decisions.  Decide to trust God to work in other people’s lives, changing from them from within in ways that you could never do yourself.  Have faith that God will work in other people’s lives when you pray for them rather than react angrily to them.

Trade pride for humility.  Pride can deceive you into thinking that you must be right on all topics, which leads to anger when others disagree with you.  But if you pray for humility, God will give you an accurate view of yourself as a person with weaknesses who needs God’s grace.  Read and meditate on Bible verses about humility, such as Philippians 2:3-8.  When you get angry, ask yourself whether or not your anger is justified, and consider how you can use your anger in the way God wants you to do s to serve others.  Don’t let pride prompt you to argue with others to try to set the record straight.  Pray for God to help you see other people’s points of view.  Wait until you can be calm before you talk to them about how they’ve treated you.  Control your thoughts, words, and actions in obedience to God.

Choose to forgive.  After people hurt or offend you, you can choose to respond either with anger that will harm you even more or through the forgiveness God calls you to pursue.  You can rely on God to help you through each step of the forgiveness process, despite your feelings.  Instead of mentally replaying the incident in which you were wronged, focus your mental energy on positive and healthy thoughts.  Pray for the people you need to forgive, asking God to bring something good into their lives.  Gradually, you’ll start to see your feelings toward them change.

Break the generational cycle of anger.  You can help prevent your children from dealing with anger in destructive ways by blessing them through intentional acts like speaking words of encouragement to them, giving them physical affection (hugs, etc.), and offering visionary prayers that focus on how you believe God will use them in the future to fulfill great purposes.  Talk with your children often and help them develop a biblical view of life.  Teach them to talk through anger when they experience it, and respond to it in ways that reflect biblical truth.

Help your wife help you.  Talk with your wife about how she can respond to your anger in ways that will help you calm down and deal appropriately with your anger.  Encourage her to listen to you, empathize with you, gently explain what happened from her perspective, walk away when you’re too angry to talk calmly at a particular moment, and work through the forgiveness process with you. 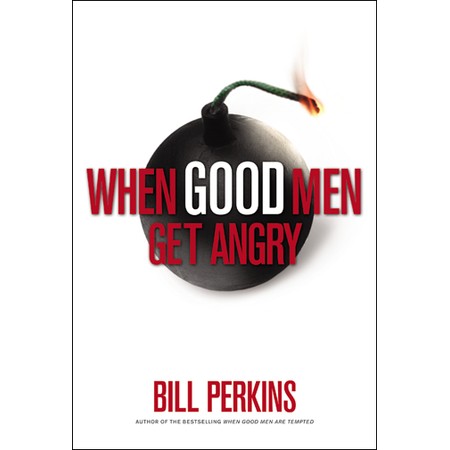 Adapted from When Good Men Get Angry, copyright 2009 by Bill Perkins. Published by Tyndale House Publishers, Carol Stream, Ill., www.tyndale.com.
Bill Perkins has conducted business and leadership seminars across the United States for companies such as Alaska Airlines and McDonalds.  Bill has appeared on nationally broadcast radio and television shows, including “The O'Reilly Factor.”  He addresses men’s groups around the world and has conducted chapels for major league baseball teams.  Bill served as a senior pastor for 24 years and is the founder and CEO of Million Mighty Men. He is a graduate of the University of Texas and Dallas Theological Seminary.  Bill has authored or collaborated on 17 books, including Six Battles Every Man Must Win, 6 Rules Every Man Must Break, and the best-selling When Good Men Are Tempted. He also coauthored the business book Give ‘Em the Pickle!  He and his wife, Cindy, live in West Linn, Oregon. They have three sons, a daughter-in-law, and two grandchildren.