The Only Way to Deal with a Giant

Goliath looked like a formidable giant on the battlefield. But consider this: he wasn’t always a giant. Goliath was a man after all, which means that he once was a baby. (He must have been a beast of a baby!) With the passing of time, he became a toddler. The toddler became a child. The child became a teen. The teen became a man. And in time, he became a giant of a man.

The giants in our lives usually start out small too. Often they begin with an attitude that says, I can handle this. It is just a drink here and there. It is just having one with the guys after work. It is just a glass of wine with Italian food. Then, after a while, it is a drink to unwind at the end of a long day. Then it is having a drink in the morning. Pretty soon, it is not being able to get through the day without a drink. People who don’t plan on ending up this way end up this way.

The problem is that if we tolerate a giant, he will take over our territory. He will come right up on our doorstep. How do we deal with that? We don’t negotiate with him. We don’t yell at him. We don’t run from him. We attack and kill him. That is how to deal with a giant.

In God’s strength, David defeated his giant. And so can you. 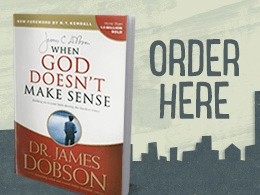 “Do you value the teaching and encouragement you receive fromA New Beginning with Greg Laurie?

When God doesn’t make sense, when it seems that He is asleep, when it feels like He doesn’t care, we must remind ourselves of His promises. Going back to God’s promises, we find something that we desperately need in those hard times: perspective.

That eternal perspective is the focus of Dr. James Dobson’s book When God Doesn’t Make Sense, which we’re offering as a thank-you to anyone who gives a gift of support to Harvest Ministries this month.