5 Reasons Why Christians Should See Noah in Theaters

Just last week, we posted a blog titled "Will Evangelicals Watch the Noah Film?" on our sister site ReligionToday.com. Judging from some of the comments (ex.: "Of course we'll watch it. If we don't support these Christian films so money is made on them, we won't get any more"), we may have taken a little too much for granted that everyone is familiar with the controversies surrounding the film.

Setting aside the idea that a film based on a biblical story or character is automatically a 'Christian' film (Jesus Christ Superstar or The Last Temptation of Christ, anyone?), there are, admittedly, some things about Noah, in theaters March 28, that give me pause:

And these are just the highlights. If you have Christian friends on Facebook, chances are you've seen the article "Russell Crowe's Noah Film - A Warning for Christians" in circulation. It's a long read that touches on even more questions, such as the Nephilim, "Watchers," magical forests, and Methuselah as a sort of shaman.

But even with such ponderables and warnings floating around, many believers are cautiously anticipating seeing Noah on the big screen in a few weeks. Here's why:

1. It's the Year of the 'Christian Movie'. We're at the start of a year in which many biblical and Christian stories are coming to the screen. Earlier today in fact I posted Christian Hamaker's review of Son of God on Crosswalk, an imperfect but fairly well-executed telling of the life of Christ. We'll also see Heaven is for Real, Exodus, and Mary, with possibilities for Cain & Abel and Pontius Pilate on the horizon. This is an intriguing trend. It may turn out to mean nothing, or it could be the start of another golden age of biblical epics. Those of us who are deeply interested in themes of hope, love, sacrifice, redemption, and forgiveness in film, and who have been disappointed by the quality of many works of 'Christian art,' are invested in finding out.

2. The Flood on Film. Imagine what today's special effects wizards can do to make a global flood look convincing. How will they depict the concept of rain in a world that possibly has never seen it? What will the springs of the earth look like? How loud will it be, both within the ark and without? What will Noah see as the waters subside? Will we get any rationale to explain the ark not having been found (unless of course it has been)? This all has potential to be very cool. If the sights and sounds are resonant, accurate, and memorable enough, the film has promise to enhance our readings of Genesis the way a trip to the Holy Land informs our understanding of the gospels.

3. Getting to Know the Story Again. I'm extremely curious to see how they handle some fascinating parts of this story. As Bob Coy writes in this devotional, "We already know how the story goes and so we kind of close ourselves off to any fresh insights about it. But if we're willing to look closely, we find something interesting that plays into our study on faith." For example, how will the film interpret Genesis 7:11 and 8:2's "windows of heaven" being opened and closed? Will they go with the answer I was raised on - that there was a ring of water surrounding Earth's atmosphere that kept everyone in a hyperbaric environment, which is why lifespans were so long? And that all this excess water eventually froze at the poles, making the planet inhabitable? And about those animals... how many were brought into the ark? I've asked this question to pastor friends and received an incomplete answer. "Two by two," they say, apparently having gone blind on Genesis 7:2. And it's things like this, that, if the film is clever, it can demonstrate how Pastor Coy is right - we become too familiar with the old stories sometimes. Which leads into my next point... 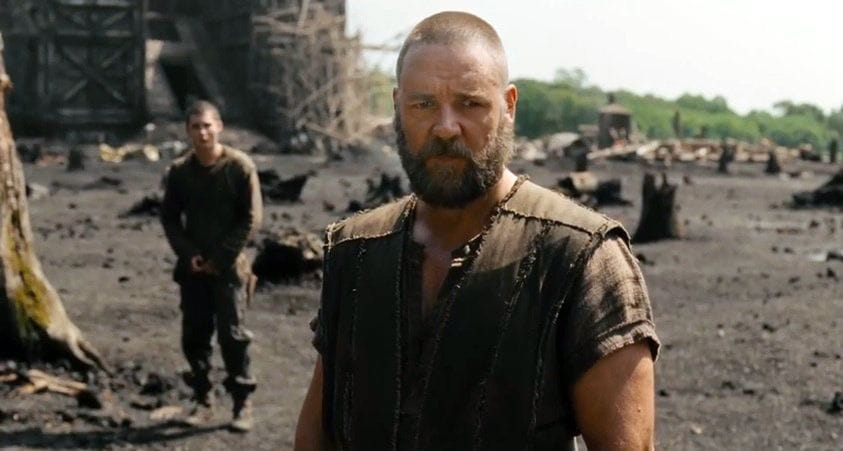 4. Noah for Grown-Ups. We write children's books about it and teach it in 3-year-old Sunday School, but the tale of Noah and the ark was never really juvenile. Quite the opposite. I crave the adults-only version of Noah, just as I craved the adults-only telling of The Passion of the Christ (my kids are 8 and 10 and will watch it one day, but not yet). Where some detractors are down on reports of Noah's post-flood drunkenness and 'survivor's guilt,' I feel like the drunkenness is in the text and the guilt is well within artistic license. What I'm more concerned about, and wanting to see depicted, is Mercy. God had a plan. This wasn't only about wrath. He sent a promise. He operated out of love. As Kirk Cameron told Crosswalk last September, Noah's story "was not about God destroying the world. This was about humanity destroying itself… all they needed was more time. But God mercifully steps in and cuts that short. He puts a period at the end to stop evil." Does Aronofsky get that? I doubt it, but I hope so. Until demonstrated otherwise, which would be a real shame and a complete waste of this much talent, I continue to hope.

5. Don't Judge a Book by Its Cover (or by Reactionary Word-of-Mouth). I did that to Harry Potter once and got it all wrong. I've not seen Noah. One who has is the film's biblical adviser, John Snowden. Snowden writes here that Noah, among other things, has a relationship with God, acknowledges his own sin, and focuses on his family. He also says the film "keeps closer to more of the text than you might have imagined." If Noah ends up preaching a false gospel, will we have "lined the pockets" of a charlatan? I suppose. If it ends up intriguing enough to start conversations between seekers and believers, will we have funded evangelism? Maybe. In either case, the success of such a film likely only means more chances to see the Bible on screen and talk about it in the public sphere.

We'll be seeing Noah and will post a video review for Crosswalk on opening day. At which time our editors will reveal a more educated opinion on what worked, what didn't, what impressed, what dragged, what inspired, and what was downright out of bounds... if indeed anything was.