On Christ the Solid Rock I Stand 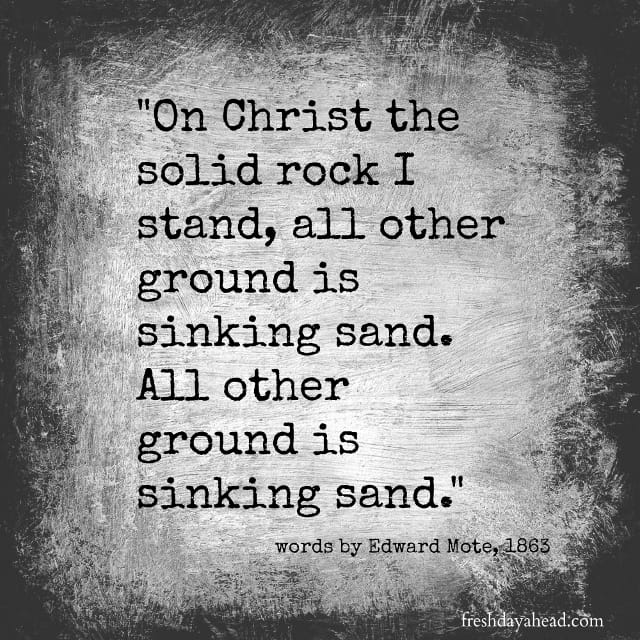 Lots of headline news swirling around in our world these weeks.

Difficult stories, political battles, wars with words, suffering, unrest, uncertainty, terrorist threats, disaster, violence, and evil.  The images and stories can often leave us feeling overwhelmed with fear and worry, for our children, for the future, for believers, and for our nation.

Yet God's Truth breaks through all that mess. He breathes peace and assurance that no matter what, He still holds all things in His hands. He's not anxiously pacing Heaven's floors. He's not thinking up a Plan B since Plan A didn't work. He reminds us that He's still in control, and is the security of our days.

"And He will be the stability of your times, A wealth of salvation, wisdom and knowledge; The fear of the LORD is his treasure." Isaiah 33:6

Woke up with this old song in my mind, On Christ the Solid Rock I Stand. Have been singing it all day, thinking closely about these words penned over 150 yrs. ago by Pastor Edward Mote. Because no matter what generation we're living in, they still hold true today.

God's word says this, "Everyone then who hears these words of mine and does them will be like a wise man who built his house on the rock." Matt. 7:24

There are lots of opinions and voices are out there for sure. Sometimes we just need to turn it all off and listen to the One voice who matters most.

That's what Pastor Mote did. As a young boy, he grew up neglected, spending much of his time on the streets while his parents managed a pub in London. He said of his younger days, "So ignorant was I that I did not know there was a God."  But at age 18 he heard God's Word and it changed his heart - his life. He was baptized and went on to lead a long, successful career as a cabinet maker. He wrote this song on his walk to work one day. Strong, faith-filled words that came from the heart of one sold out soul living boldly for Christ. At age 55, Mr. Mote became pastor of a small Baptist church, and it's reported that he never missed a Sunday in the pulpit for the next 21 yrs. He left this world for his heavenly home at age 77, leaving his mark in this world through songs inspired by the heart of God.

These powerful words of an old hymn are filled with such truth, grace, and relevance still for this day:

The Truth remains through all eternity.

Jesus is the Rock that won't move.

He's the Rock that won't budge.

He won't shift this way or that based on popular opinion.

He won't ever sink or give way to defeat.

He is sure and safe, loving and gracious, forgiving and faithful, powerful and strong, and His words are Truth, bringing life and freedom.

He paid the price on Calvary's cross, He took our sin and shame, bore it all, on our behalf, so that we could live free. The power of the Cross and the Resurrection of Christ broke the curse of death and shame.

That's what real love is.

Hope you are too.