The Light of the World Still Shines in Dark Times: Why We Don't Have to Be Afraid of the Storms

Wrote these words at the beginning of this year. So much has happened in our world since then. And maybe a lot has happened in your life too. Now, more than ever before, we need to hear God’s healing whispers for a broken world.

His reminder to my heart early one morning, that amidst the dark, He still is hope. He was then, He is now, and He will be forever... 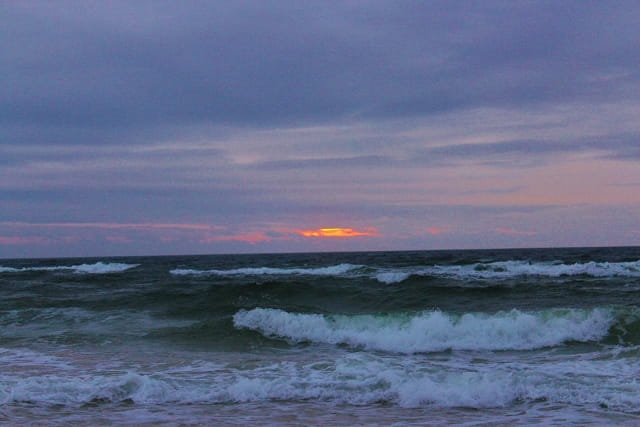 “Got up early this one morning, just before dawn, headed to the beach to watch the sunrise. Winds were blowing, sand shifting beneath my feet as I walked, waves strong and fierce hit hard against the shoreline. The sky was a sheet of blue gray, clouded over by a storm that loomed close, only pierced through by the glimmer of beautiful light that could not be contained. It still shone through. Hues of orange and yellow. Light of hope against changing tides, shifting sands, and stormy times. That's who He is to us in life.

Nothing ever remains the same in this world. Things change. People move. Time goes by. Kids grow up. We may experience deep or unexpected loss. And sometimes our footsteps falter on things we've depended on so very much, but really aren't meant to fully support us. We can't simply rely on what surrounds us, even the people who we love most, because to fully rely on one thing or person means that they can never leave or change.

That tiny sliver of light amidst the gray this morning, spoke volumes to my heart. When we can't find our way at times, when the tide has turned and the struggles seem fierce. When we feel overwhelmed, and the winds blow strong...He's still there. Hope shines through. It may be just a glimmer but it's enough, to whisper His words of truth, "I see you, you are never alone. I will carry you through the fiercest of times, into places of peace, and will make your footsteps strong."

I watched the birds soar in the wind, seemingly fearless and bold, finding power in the gusts that blew, to go higher, stronger, bolstered by the gale force winds.

Sure foundation. Wind beneath our wings. Whisper of peace that calms the waves and storm. Glimmer of light in a dark world. He is our Hope.”

Jesus came to this earth when the skies were black. Such a deep, symbolic picture of what He came to do.

Light of hope ushered straight in, against the backdrop of darkness. Shining so brightly in a world that sought to destroy His message and power.

But you can’t make a King stop shining. You can't deny the might of the One makes the sun to rise. You can never destroy the solid Rock, our firm foundation, even amidst the changing times. Because He never changes. He’s stable, and sure, steadfast, unwavering. He conquered death to set the captives free. He reigns forever and graces us with power to live strong, bold lives.

Don’t ever doubt or fear that He’s not with you. He hasn’t lost control. He hasn’t forgotten you. Not ever.

We don’t have to be afraid of the storms, uncertainty of the future, or changing times.

For He knows our way, and He goes before us. Pure light shining greatness against skies of dark.

7 Verses of His Hope and Peace, to remind you, He is with you:

“May the God of hope fill you with all joy and peace as you trust in him, so that you may overflow with hope by the power of the Holy Spirit.” Rom. 15:13

“He brought me up out of the pit of destruction, out of the miry clay, And He set my feet upon a rock making my footsteps firm.” Ps. 40:2

“But those who hope in the LORD will renew their strength. They will soar on wings like eagles; they will run and not grow weary, they will walk and not be faint.” Is. 40:31

"I am the light of the world. Whoever follows me will never walk in darkness, but will have the light of life." John 8:12

“And he arose, and rebuked the wind, and said unto the sea, Peace, be still. And the wind ceased, and there was a great calm.” Mark 4:39

Debbie McDaniel is a writer, pastor's wife, mom to three amazing kids (and a lot of pets). Join her each morning on Fresh Day Ahead's facebook page, DebbieWebbMcDaniel, for daily encouragement in living strong, free, hope-filled lives.
Find her also at Twitter and Web Site.