9 Myths about Forgiveness That Fool the Best Christians 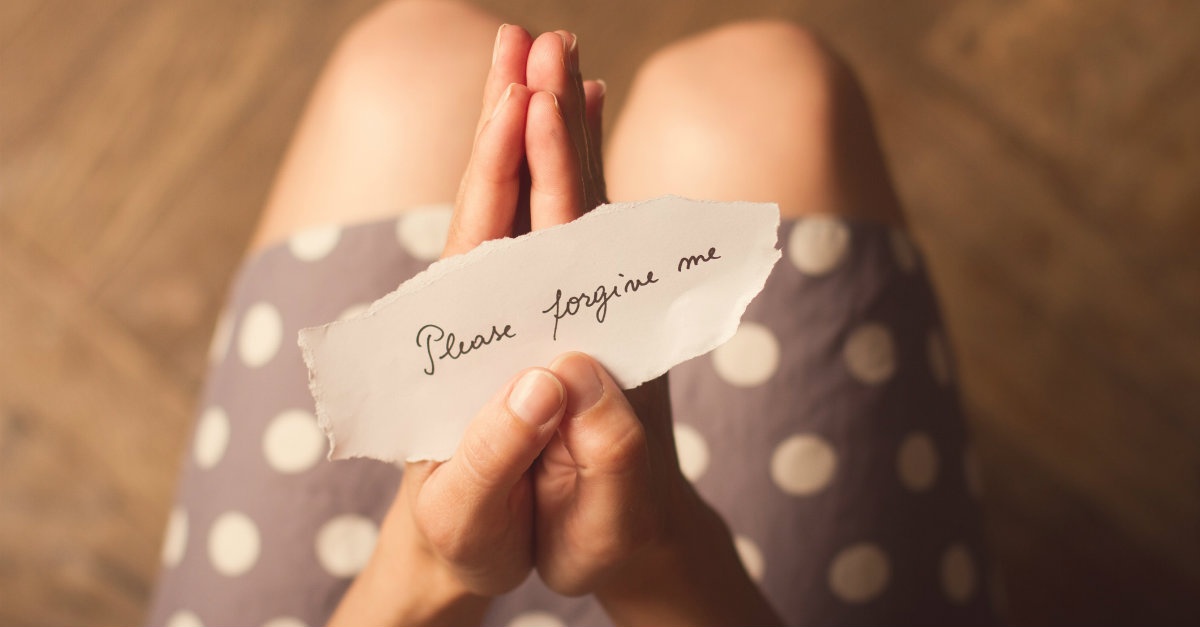 Forgiveness always seems to be a hot-button issue here at Crosswalk. We post an article about forgiving those who have wronged you (Ephesians 4:32) and BAM! Comments abound.

You share your stories of pain and suffering at another’s hand. You explain why you struggle with forgiveness, and ask why this commandment is so hard to follow. We empathize with your pain; we’ve been wronged too.

“Be kind and compassionate to one another, forgiving each other, just as in Christ God forgave you” (Ephesians 4:32).

In the Relevant Magazine article 9 Big Myths about Forgiveness, Pastor Scott Savage writes that our reluctance to forgive may actually stem for our misconceptions about the issue.

It’s time to eliminate these myths and experience the healing picture of forgiveness as we are called to in Scripture.

“Therefore, as God’s chosen people, holy and dearly loved, clothe yourselves with compassion, kindness, humility, gentleness, and patience. Bear with each other and forgive one another if any of you has a grievance against someone. Forgive as the Lord forgave you” (Colossians 3:12-13).

Brothers and sisters, let’s recognize these beliefs as the falsehoods they truly are.

Myth 1: Forgiveness is about the other person.

In reality, forgiveness is for you.

Myth 2: If you forgive someone, you should forget it ever happened.

This myth is 1) beyond one’s control and 2) potentially dangerous to the person who has been wronged.

Savage explains, “Our hearts and minds do not have a ‘recycle bin’ like our computers, where we can simply drag items there and watch them disappear. Also, forgetting something like abuse or deceit can often lead to dangerous consequences for the victim of a crime.”

Myth 3: I can forgive them while still secretly living in bondage to regret and shame for my own failures.

Dear friends, you cannot set another free of their failure without accepting freedom yourself. Freedom that is found in Christ Jesus.

“God forgives us in Jesus and enables us to forgive others… If we want to experience the freedom that comes from forgiving someone else, we need to experience the forgiveness God wants to introduce into our lives,” Savage writes.

Myth 4: The people in the Bible didn’t need a lot of forgiveness.

We look up to our ancestors of the faith, but they were sinners as we are. The truth that we must accept is that God worked in (and changed!) sinners, and can work in the people who wrong us as well.

Savage writes, “Our favorite Bible characters are often the people most in need of forgiveness. Yet, in our life today, when we encounter dysfunctional people who sin and hurt others, do we allow God space to work today like He did with Moses (murderer), David (murderer and adulterer) and Paul (mass murderer and persecutor of Christians)?”

Myth 5: Forgiveness is a decision, an act of the will.

While not entirely a myth, believing this simplifies forgiveness too much. There is more to forgiveness than simply deciding to forgive. It’s a process… and that process involves making the commitment to forgive the person who hurt you over and over.

“While we may have thoughts and decisive moments of letting go, it is in the processing of letting go again and again that we experience the full magnitude of forgiveness,” Savage writes.

This is camouflaged as a biblically sound idea, but it’s not. Refusing to forgive is still violating Scripture. Savage says that part of forgiveness is giving up our desire for revenge and trusting God to bring about justice.

“I believe unforgiveness is at the heart of our lust for revenge. As a follower of Jesus, I lay down my ‘right’ to revenge.”

Myth 7: Forgiveness and reconciliation are the same thing.

There is a distinct difference between forgiveness and reconciliation. Basically, forgiveness is step one. Reconciliation, the healing and rebuilding of the relationship, takes much longer.

Savage explains, “Ultimately, reconciliation is God’s gift to broken relationships where everyone involved has forgiven themselves and forgiven others. Reconciliation can take time, however—a long time… Reconciliation will move you forward, not backward to the ‘way it used to be.’”

Myth 8: I need to tell the person I forgave them.

What are you motives for telling the person that he is forgiven? Is it to lay a burden of guilt on him by saying, “You never knew you hurt me, but you did and I carried the pain with me for years. But I’ve forgiven you now”? Skip that; it will only hinder the reconciliation process. If, however, you know that your motives for telling the person are pure, sharing can be a valuable aspect of forgiveness.

Savage says, “You can forgive someone without ever telling them because forgiveness is about your freedom, not about theirs.”

Myth 9: Forgiveness is something I can do on my own.

Processing pain is difficult. There is no shame in getting help from a trusted source.

“The hardest things in life and the most important things in life are often things we do not do alone. For many of us, we’ve tried forgiving and we haven’t made progress. If we were going to make it alone, we would’ve done so by now,” Savage writes.

When we clear these myths out of the way, we are left with the heart of forgiveness: That we are to forgive others (even if we think they don’t deserve it) because we were forgiven by God when we didn’t deserve it.

So, what’s next? How do we go about this process of forgiveness? Crosswalk.com writer Cindi McMenamin explains it like this:

“Are you still in chains to the person who has hurt you? Would you like to be free from the bitterness that is binding you and preventing you from moving forward in your life? Take some time right now to admit to God that you have been hurt. Go ahead and acknowledge to the Lord that the person who hurt you owes you for what they have done to you. Then confess any desires for revenge you may have felt, and pray along these lines:

“Lord, I choose to forgive (name of person) for (list what the person did that hurt you) even though it made me feel (painful memories or feelings).

“Whether your offender is sorry or not, whether he ever expresses remorse or not, your decision to release him of his offense and debt to you will release you from your prison of bitterness and enable you to move forward.”

What Power Does Forgiveness Have for Christians?

Read the transcript of the video above by R.T. Kendall about the power of forgiveness:

"During our years at Westminster Chapel, we had some hard times. And there was a moment when Louise and I were in the greatest trial our lives, something I can't tell you what it was, can't tell anybody. You can find out when we get to heaven. But I was deeply hurt, couldn't believe this could happen. What happened wasn't fair, it wasn't right, and I was angry.

An old friend from Romania, his name is Joseph [Tsung 00:00:40], happened to be in London. Because I knew he wouldn't tell anybody, I decided I would tell Joseph what happened, what "they" did. And if I'm honest, the reason I told Joseph is that he'd put his arm around me and say, "R.T., you ought to be angry. Get it out of your system." That's what I was hoping he would say.

He just said, "Anything more?" "No, that's it. That's it." I wasn't prepared for what followed. If I could narrow 25 years in London down to 15 minutes, it's when Joseph Tsung looked at me and said, "R.T., you must totally forgive them. For until you totally forgive them, you will be in chains. Release them and you will be released." Nobody had ever talked to me like that in my life. Faithful are the wounds of a friend.

I said, "Joseph, I can't." He said, "You can and you must." It's the hardest thing I've ever had to do, and almost certainly the hardest thing anybody has to do, because when you have to say to God, "I forgive them," and then ask God to bless them, you set them free. You let them off the hook. You kiss vengeance goodbye. You kiss vindication goodbye. And you just set them free. I'll tell you what, it is the most emancipating thing in the world. It changed my life.

That was the darkest hour Louise and I had ever gone through, the darkest moment. I can now tell you, it was the best thing that ever happened to us, the best. I cannot exaggerate it. The best thing that ever happened to us, and so much has happened as a result. My life changed. My ministry changed. People say, "How come you've written all those books?" They think it's my brain or my education. None of those, it's the anointing of the spirit that has come upon me since I have set people free.

And anytime I think I have a right to be angry, I give it up, and I bless them, and ask God to bless them. I have a prayer list of people I pray for. They don't know they're being prayed for, won't know until they get to heaven, maybe, they don't know then. I don't care, but I pray for anybody who's hurt me, or I feel has been unfair, whatever. I just pray for them. It almost becomes selfish. You get such a good feeling. And the blessing of the Holy Spirit is compounded.

People who hold a grudge, want vengeance, can't forgive, they do injury to themselves. Did you know, medical people show that holding a grudge is injurious to your health. It can lead to arthritis, kidney disease, high blood pressure. I'm not saying that if anybody has these this is way, but it could be, it could be. And what happens is, when you forgive them, sometimes the physiological process that got you into that ill health can be reversed. People can actually be healed by total forgiveness. The advantages are so wonderful."