When You’re Struggling with Bad Thoughts and Habits - Girlfriends in God - June 7, 2017

For though we live in the world, we do not wage war as the world does. The weapons we fight with are not the weapons of the world. On the contrary, they have divine power to demolish strongholds. We demolish arguments and every pretension that sets itself up against the knowledge of God, and we take captive every thought to make it obedient to Christ (2 Corinthians 10:3-5 NIV).

A stronghold is one of those churchy Christianese words that is hard to wrap our minds around. It’s not a word we use everyday. So what exactly is a stronghold? Let’s take a look.

A stronghold is a thought pattern that forms a fortress around the mind, holding it prisoner to faulty thinking. It is formed brick-by-brick by repetitive faulty thinking or all at once by a onetime traumatic event such as a rape, molestation, or abuse.

In the Old Testament, a stronghold was a fortified dwelling used for protection from an enemy. David hid in wilderness strongholds when he was hiding from King Saul, who was trying to kill him (1 Samuel 22:4; 23:14). These were usually caves high on a mountainside or some other structure that was hard to attack. In the Old Testament, God is called our stronghold: “The Lord is a refuge for the oppressed, a stronghold in times of trouble” (Psalm 9:9).

The New Testament writers took this same imagery of a fortress to describe the spiritual tower of bondage, not protection, that we put ourselves in by developing thought patterns and ideas that hold us captive. Beth Moore calls a stronghold, “Anything that we hold onto that ends up holding onto us.” It is anything that sets itself up against the knowledge of God. A stronghold does not protect us, it protects the enemy who is manipulating our thoughts and suggesting our actions.

A stronghold might be a thought such as:
I’m no good.
I’m damaged goods.
Nobody loves me.
Nobody cares about me.
I can’t do anything right.

A stronghold might be an addiction such as:
Shopping.
Alcohol.
Sexual promiscuity.
Over-eating.
Feeling sorry for yourself.

The enemy locks you up in hopes you’ll never reach for the key that is certainly within your reach. But you can.

The only way to expose the enemy and defeat him is to tear down the stronghold, the fortress where he is hiding.

An ungodly habit becomes his habitation, his stronghold in our lives.

Once you recognize a lie in your life—perhaps something that has even taken hold of your imagination and stirred ungodly feelings such as jealousy, worry, fear, or anger—you reject the lie and replace it with truth.

Each time you reject the devil’s lie, you knock one more brick from his fortress, and pretty soon, he’s exposed for the liar and deceiver he is.

I do not want to give the impression that this is an easy process. Some of us are so comfortable with our strongholds we don’t even realize they are there. That was the case with me.

I had been walking around saved but enslaved for so many years. I dragged the ball and chain of inferiority, insecurity, and inadequacy around with me everywhere I went, and I grew so used to my limp, I didn’t even notice it.

I was comfortable with my weakness and served Satan a cup of tea every day I sat hidden away behind the wall he had helped me build. But praise God, Jesus opened my eyes to the truth and called me out of the fortress that had become my prison cell.

Destroying strongholds is not easy, but it is simple. Paul used words such as struggle, resist, tear down, and fight. The good news is that we’re not a one-woman demolition crew. The Holy Spirit gives us the power, Jesus gives us the light, and God is overseeing the entire project. We simply agree to participate through obedience.

When we talk about strongholds, we’re not talking about random thoughts or occasional sins. A stronghold is a thought pattern or habitual sin. It is a fortress built with the bricks of thoughts and held together by the mortar of emotions. Strongholds become our perception of reality.

In my own life, replacing self-defeating lies with God’s truth helped me chip away at the stronghold of inadequacy that led to a negative cycle of discouragement, despair, and defeat. Rejecting the devil’s lies will tear down those strongholds, and after a time, even the ruins are removed.

When we realize the enemy’s true identity, recognize his lies, and replace the lies with God’s truth, we’ll be free.

Heavenly Father, show me any strongholds that I have in my life. Show me any areas where I am not totally free from the enemy’s influence. Thank you, Jesus, for coming to set me free. Now help me live free in every area of my life.

A stronghold in the New Testament imagery is much like a prison.

What is one main difference between a stronghold and a prison?

Go back to today’s truth and break it down. This is one way I study Scripture. Write down your thoughts on each phrase. Then tell me if this was helpful. 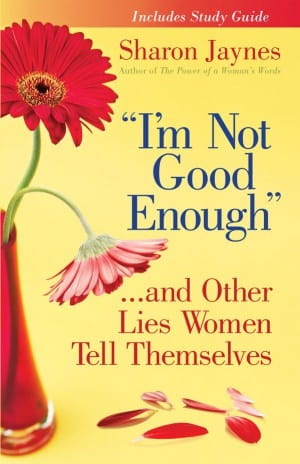 You’ve heard the lies before. Maybe even whispered one or two to yourself from time to time. Maybe repeated them so often you’ve started to believe them. “Nobody loves me. I’m worthless. I would be happier married to someone else. I’m just not good enough.” The list goes on. It’s time to recognize the enemy’s lies and replace those lies with the Bible’s liberating truth. It’s time to renew your mind and think God’s thoughts rather than be held in bondage by the enemy’s deceptions. It’s time to be set free to see yourself as God sees you: His holy, chosen, cleansed, forgiven and dearly loved child. Now that’s a truth worth repeating. To learn more, check out my book I’m Not Good Enough...and Other Lies Women Tell Themselves. It’s a game changer!