When Jesus looks at the world, he sees what can be. Jesus shows us what the kingdom of heaven looks like and asks us to live its principles here on earth. This means turning normal personal economics upside down. This is what Jesus' economy looks like.

Here are five ways you can live (and give) like Christ — turning your personal economy into Jesus' economy:

1. BE WILLING TO DROP EVERYTHING FOR JESUS

When Jesus first called his disciples, they dropped everything to follow him:

“Passing alongside the Sea of Galilee, [Jesus] saw Simon and Andrew the brother of Simon casting a net into the sea, for they were fishermen. And Jesus said to them, ‘Follow me, and I will make you become fishers of men.’ And immediately they left their nets and followed him. And going on a little farther, he saw James the son of Zebedee and John his brother, who were in their boat mending the nets. And immediately he called them, and they left their father Zebedee in the boat with the hired servants and followed him” (Mark 1:16-20 ESV).

Jesus’ earliest followers literally dropped their livelihoods to follow him—they completely dedicated themselves to him. Similarly, we are called to make sacrifices for Jesus—to show others love by giving, praying, and investing in them. For Jesus, belief and actions are one and the same—you cannot have one without the other. We must be willing to give whatever Jesus asks of us.

2. RETHINK HOW YOU USE YOUR MONEY

When it comes to our time and resources, Jesus has an entirely different economy in mind. Is money standing between you and Jesus? How can you use it to help and empower the impoverished?

3. RECOGNIZE SACRIFICE AND APPRECIATE IT

Regarding a poor widow who put a seemingly insignificant amount of money into the offering box, Jesus says:

“Truly, I say to you, this poor widow has put in more than all those who are contributing to the offering box. For they all contributed out of their abundance, but she out of her poverty has put in everything she had, all she had to live on” (Mark 12:43-44; see Mark 12:41-44 ESV).

The currency of Jesus’ kingdom is different than ours. Jesus’ currency is self-sacrifice and love.

4. DON'T HESITATE, NOT EVEN FOR A MOMENT

To a man with a recently lost love one, Jesus said:

Jesus was right there, calling him in person. And this meant the man had to act now. We all have these moments in life: When Jesus tells us to act now, and we have to take him seriously when he says so.

5. CARE DEEPLY ABOUT THE IMPOVERISHED AND UNREACHED

At the end of it all, Jesus notes that he will recognize those who follow him by whether or not they are caring for the impoverished, outsider, and marginalized. This is what the "least of these" passage is about (Matthew 25:31-46).

Jesus has also given us a mandate to bring the gospel to those who are yet to hear his name. Jesus' economy is not just about alleviating physical poverty; it's also about alleviating spiritual poverty. Jesus tells us to "make disciples of all nations" (Matthew 28:19-20).

God has asked us to demonstrate our belief by bringing good news to those who feel hopeless. We are called to drop everything for him. This is what Jesus’ economy is all about: envisioning what the world could look like and joining God in the process of making that vision a reality.

Jesus has called us to join him in his work—to believe in it with all we have. The cost may be hard to bear or understand at times, but when it’s put in the perspective of all that Christ has done for us—dying for our sins—it seems like very little.

John D. Barry is the CEO of Jesus’ Economy, an innovative non-profit creating jobs and churches in the developing world. At JesusEconomy.org, people can shop fair trade and give directly to a cause they’re passionate about, such as bringing the gospel to unreached people groups. John is also the general editor of Faithlife Study Bible and the author or editor of 30 books. 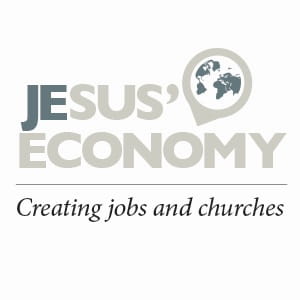