BIBLE VERSE OF THE DAY: “Forgetting what is behind and reaching forward to what is ahead, I pursue as my goal the prize promised by God’s heavenly call in Christ Jesus” (Phil. 3:13-14).

Overcoming Your Past
By Jason K. Allen

Did you know God can actually get greater glory when he uses people with a checkered past?

That is the story of the greatest Christian who ever lived, the apostle Paul. He may well have had the worst past ever to overcome.

He wrote thirteen New Testament letters and traversed the Mediterranean region on three major missionary journeys. This mighty man of the faith planted numerous churches, won multitudes to faith in Christ, and laid the doctrinal foundation on which the church has ministered for nearly two millennia. The apostle Paul was a missionary-theologian unlike any other the world has ever known.

In Acts 9, Paul, then known as Saul, met the risen Christ, was gloriously converted, and was commissioned as an apostle. But before he encountered Christ in Acts 9, he appeared in Acts 7. This passage records one of the most diabolical scenes in all the Bible—the stoning of Stephen, the first martyr of the early church. In that setting, we find Saul, holding the coats of the stone throwers, rooting them on. 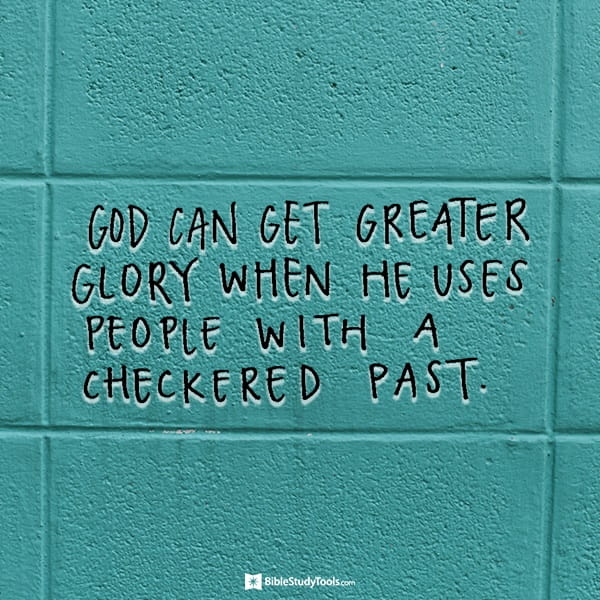 Then, in Acts 9, overflowing with hatred and rage, Saul goes to Damascus to persecute other or even more Christians. On that roadway, the resurrected Christ appeared to Saul, confronted him, and subsequently called Saul to himself and commissioned him into ministry.

What was Paul’s secret to overcoming his past? Why was his past not a weight but a springboard? The key is that he looked forward to Christian service, not backward in guilt, shame, or regret. Paul testified, “But one thing I do: Forgetting what is behind and reaching forward to what is ahead, I pursue as my goal the prize promised by God’s heavenly call in Christ Jesus” (Phil. 3:13–14).

There is a difference—a massive difference— between overlooking your past and forgetting about it. Paul never overlooked his past. He wrote extensively about man’s sinfulness, including his own.

Do you see the progression? The more Paul matured in Christ, the more he reflected on his life before Christ. The more theologically he thought about sin, repentance, conversion, and grace, the lower his view of himself became, and the more his view of the gospel increased.

The same redemption can be yours by applying the gospel to your past.

Excerpted with permission from Being a Christian: How Jesus Redeems All of Life by Jason K. Allen. Copyright 2018, B&H Publishing Group.

Dr. Jason K. Allen serves as the fifth president of Midwestern Baptist Theological Seminary in Kansas City, Mo. He is the author of three books, including the forthcoming Being a Christian: How Jesus Redeems All of Life.