Methuselah was the eighth among the antediluvian patriarchs, those precursors of our modern type of humanity. They lived long; we live short. From the first of our ancestors, Adam, and through to the tenth, Noah, longevity was what they had and how they lived. What did Methuselah worry about when he was, say, middle-aged, at 500? The Flood was still to come.

Those Ten Men before the Flood

Methuselah was the longest lived among the ten, although four others lived, as he did, longer than 900 years. The shortest lived was Methuselah’s son Lamech, who died when he was a mere 777-year-old.

All these ten patriarchs died natural deaths except one. Methuselah’s father, Enoch, did not die. At age 365, he “walked with God” and, as Genesis 5:23 puts it, “he [Enoch] was not, for God took him.” In other words, Enoch was transferred directly into heaven by God…which God would later do with Elijah as described in 2 Kings 2:11. Enoch and Elijah are the only two men in Scripture who went to heaven without dying first.

Are we certain, though, about Enoch? We’re certain about Elijah—the Bible tells us details of his transport. But Genesis does not say where God took Enoch, nor does it describe the details other than to say that Enoch was not. Most Christians, including the earliest commentators, assume Enoch was taken up to heaven, but how?

Saint Ambrose (c. 340-397) in his work Isaac, or the Soul, fleshes out the story with dramatic detail. Ambrose alludes to Pentecost; he refers to the wings of fire that flew through the mouths of the Apostles, those true wings which spoke the pure word. Enoch flew on these wings, avers Ambrose, when he was snatched up to heaven. Ambrose goes farther and comments that Enoch’s transport shows us something we need to know, something we should apply didactically to ourselves. Those who truly “walk with God” place their hope in God and so do not dwell among the sinful of earth but are transported, so to speak. They cleave to God, we should, too.

What Does the Bible Say about Methuselah?

The fact that Methuselah’s dad vanished makes an exciting tale, and Methuselah’s grandson also has an exciting tale. Most of us learned about him during our childhoods. He was Noah, the ark man. Our children’s Bibles had illustrations of the animals—two by two—marching into Noah’s ark. I expect many of us had our own set of play animals and a play ark to go with them.

But what does Scripture tell us about Methuselah himself, son of Enoch and grandfather of Noah? Not much.

Among the antediluvian patriarchs, Adam gets a lot of scriptural attention—he being the first—as does Noah, the last. Enoch has his transport story, by means of spiritual fire or otherwise. But all the rest of the patriarchs get only three sentences each, and they all get the same sentences, in sonorous repetition. Read Genesis 5. Between verse 4 and verse 31 all the patriarchal lives are summed up, and the summations use exactly the same words (with one extra sentence for Enoch). Only the men’s names vary and their numbers of years.

For example, regarding Methuselah, here are the three sentences. First, we learn how old he was when he fathered his first son—187 years. Second, we learn how long he lived after the birth of his first son and that he had other sons and daughters—782 years, and they all had other sons and daughters. Third, his lifespan is summed up in years—969 years—and then there is a final phrase, “and he died.”

The Artistic and Linguistic Elements of the Story

We hear that same poetic measure regarding nine out of the ten patriarchs: “and he died.” There is literary artistry in this tolling, bell-like refrain.

Literary artistry is deliberate in Scripture. God, who is both protagonist and author, is invisible but He speaks—either as a still, small voice (to Elijah in 1 Kings 19:12) or as a rumbling thunder (enjoined by Elihu to be heard by Job in Job 37:2). When God speaks, the Hebrew word debar, which is used, means both word and action. Both at the same time. Word is action; word does not exist idly, on its own merit. 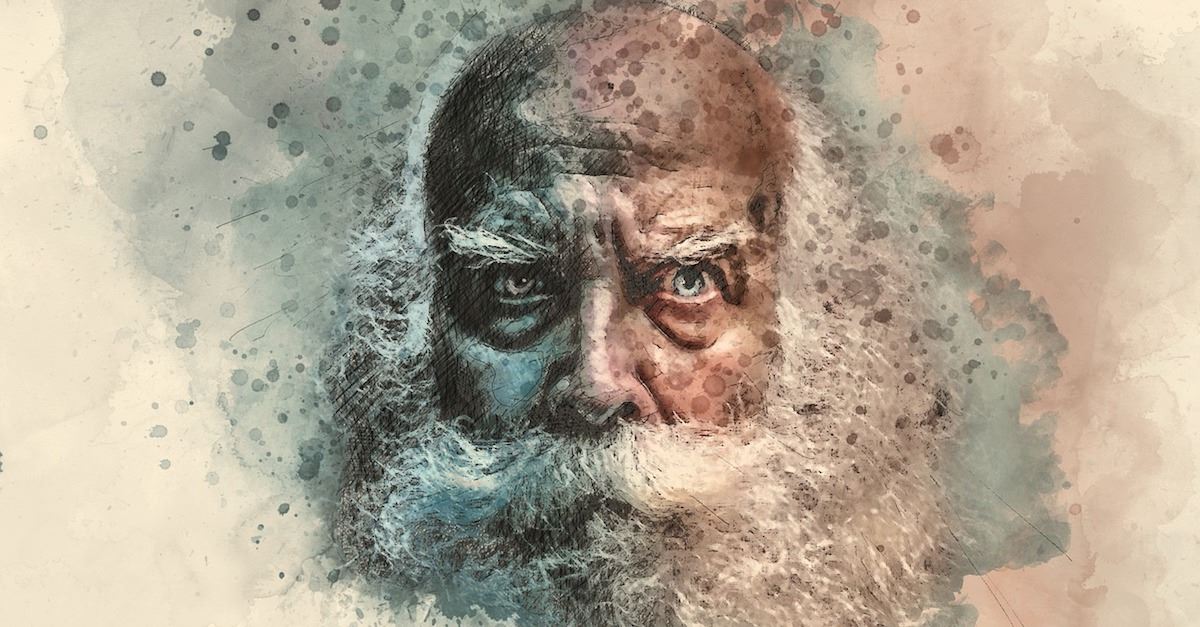 What Can We Know about Methuselah Himself?

I’ve stated that we learn nothing about Methuselah in the Bible except from his three sentences. But is there anything we can infer? What about the man’s name? What does his name suggest to us? Most scholars believe Methuselah’s name is Semitic, so I agree.

Semitic (and Hebrew) existence is rooted in the salvific saga of the Old Testament. God’s act, which is His word, included the following debarim(plural of debar).  He “spoke” a people of His own, in His image, to inhabit the world He made, to flourish in it, to multiply, and to obey the single commandment He set in place. Unfortunately, they didn’t. And thereby hangs a tale. In fact, thereby hangs the tale of creation, fall, redemption, and restoration. But back to Methuselah.

The first half of the man’s name, which is the m tu portion, is almost certainly man of. After that, it gets dicey. I’ve read that the traditional understanding of this portion, as part of a name, is javelin. If accurate, Methuselah is the antediluvian Javelin Man, which is a super hero designation I adore. Other suggestions of the meaning include sent or sending—hence sent man. Or canal—hence man of the canal. Maybe one of these others is the actual correct one, but neither one of them is as exciting as Javelin Man!

Personally, (here I’m thinking of myself as an antediluvian patriarch) I was never much good at the javelin; instead, the other “patriarchs” dubbed me Shot Put Man. But I had javelin friends, and I remember the way they sent their spears vibrating and singing through the upper air in the sun, when we were all out on the field competing during our age of twenty-somethings. Because of those exciting moments, I love to imagine my antediluvian teammate Methuselah, a hale young athlete during his 300-somethings, perhaps at war or more likely competing in the annual Semitic Games—javelin high!

The Oldest Men Who Ever Lived and Why We're Different

The antediluvian age was the period into which the history of humankind descended after the Fall. Kicked out of the Garden, Adam and Eve were separated from God’s immediate companionship—in the cool of the day—and forced to make their way on their own, in a world requiring labor from men in the fields and labor from women in childbirth. Disease, evil, death—all these were the consequences of sin…and are still our reality today as inheritors of sinful nature in a fallen world.

In fact, the machinations of the evil one have been so successful since his appearance as the fourth inhabitant of the Garden that, today, we scarcely recognize his work as having blighted the universe, so ubiquitous is the blight. Today, we go along in our lives feeling—more or less—our urgency to sin, doing our best to avoid it when we are in a salubrious mood, trying when we’re not too distracted to get ourselves closer to Jesus, doing the best we can. But we are fallen.

The question has often come up: how is it that the antediluvian patriarchs lived lives of a length that is incomprehensible to us? I mentioned my grandmother who was a centenarian (my dad was one too—101). But these contemporary humans who seemed to me to be so old were outpaced by the patriarchs at the rate of seven, eight, or nine times! What did they remember and concern themselves about when they were surrounded by their first sons and their other sons and daughters at a birthday party?

Maybe, here’s how their longevity came to be, and then stopped. Cain killed Abel, about as early in the patriarchal age as possible. Adam and Eve had another son, Seth, to replace their good Abel. After that, for centuries conflict burned between the good Sethites and the bad Cainites—interpreters consider Methuselah to have been a Sethite—and whatever was good, and strong, and righteous in God’s eye was battered until God was angered mightily.

The Spirit of God still abode in humankind until the end of the patriarchal age. However, God was fed up with the wickedness of man, which was great upon the earth. God dictated that His Spirit would not abide in humankind forever. At the end of the age, God determined that “[Mankind’s] days shall be 120 years,” as is reported in Genesis 6:3. God’s fury was such that, when he found one righteous man, Methuselah’s grandson, He determined to start over again, this time with that one righteous man, with Noah, his wife, their three sons and their wives—and with seven pairs of all the clean animals, and one pair of all the unclean animals. And then God unleashed the Flood. It was by faith that Noah was found righteous, and it was by faith that he and all other believing patriarchs were redeemed and saved by grace.

Slender and elegant, my grandmother sat on her couch in the middle of her extensive family of children, grandchildren, and great-grandchildren. I am her first grandchild. I sat next to her. I was 42 and would be 43 in two weeks—getting older myself. I remember that our conversation went something like this.

“How are you doing, Gram?”
“I’m feeling good. I want to see what happens next.”
“I’m told that the first century is the hardest. After that they get easier.”
She laughed. “That’s good to know.” She smiled at me. “Have you been talking about it with Methuselah?”
“I can’t find him anywhere.”
She thought for a moment and then said, “He’s out there somewhere. All those old ones are. We can still feel them if we try.”

Today, we still live in a fallen world and humans are still consumed by sinful nature, but God had a plan from the very beginning knowing the choice the first Adam would make. His plan of redemption through His Son Jesus the Messiah is available to all—all can be saved by grace through faith. One day, as believers, when we pass from this earth and enter into the heavenly presence of our Father, we will see every believer from the patriarchs onward who was redeemed by the saving power of the Savior.

Dr. Dikkon Eberhart and his wife Channa live in the Blue Ridge area of SW Virginia. They have four grown children and five grandchildren, who keep them busy. Eberhart is the author of the popular memoir The Time Mom Met Hitler, Frost Came to Dinner, and I Heard the Greatest Story Ever Told (Tyndale House Publishers). Eberhart writes memoirs to assist those who long to be closer to God.  Meet him at his blog and website www.dikkoneberhart.com