Who Was Mary Magdalene in the Bible?

Not every Gospel account of Jesus’ life, death, and resurrection focus on the same events and details, but all four attest that Mary Magdalene witnessed Jesus’ crucifixion and burial. Her connection to Jesus was undeniable. The healing that took place in her life on account of His miraculous presence inspired the rededication of her life to follow Jesus to His burial . . .  until she could no longer physically see her Savior.

Mary’s desperate longing to be close to Christ, to serve Him in any way she could, became the way she lived her life. She knew she would not have a life to live if not for Him. What Mary lived daily is the faith we all strive to achieve. What was so special about Mary Magdalene, that Jesus chose her to walk out such an extravagant story? Who was Mary Magdalene really, and what happened to her after the resurrection of Christ?

Here are five questions answered about the life and story of Mary Magdalene in the Bible.

Who Was Mary Magdalene in the Bible? And what caused her need for healing?

“Jesus traveled about from one town and village to another, proclaiming the good news of the kingdom of God. There Twelve were with him, and also some women who had been cured of evil spirits and diseases: Mary (called Magdalene) from whom seven demons had come out…” Luke 8:1-2

Mary was a Jewish woman from the fishing town Magdala, on the western shore of the Sea of Galilee. Her name is mentioned 12 times in the Gospels, more than most of the apostles. Mark and Luke recorded the healing of demons from Mary’s life in their Gospel accounts. For a picture of what it must have been like for Mary to suffer through this in the first century, imagine the shame of being linked to physical or psychological illness as a cause of the demon possession.

Maurice Casey, author of Jesus of Nazareth, surmises Mary must have suffered from severe emotional or psychological trauma to deem an exorcism necessary. She was battered and bruised, injured and in agony from the suffering demon possession entailed. Mary lost all control, and dignity, along with everything she knew in her previous life. Beauty and wealth did not spare her from the evil that assailed and attacked her every hour of every day. “Seven is a mystic number suggesting ‘completeness,’ implying that when the evil spirits dominated Mary the suffering was extremely severe.” (All the Woman of the Bible)

One can only speculate what it was like at the moment Jesus looked upon Mary in her state of desperation. Only He could have seen who she really was regardless of her derailed state. Not only did he recognize her, but commanded the demons to leave her. Though there are not a lot of details recorded about this event, her name is among the few mentioned in recordings of Jesus’ healings. The friendship forged from the freedom she suffered through led to Mary’s entire life henceforth serving as a reflection of her gratitude.

Did Mary Magdalene that poured out perfume at Jesus’ feet?

She was one of many in a literal sea of Mary’s that followed Jesus, being that it was the most common name for a Jewish female. Thus, when writing about her, it was necessary to clarify which Mary. Some historians claim that it was not Mary Magdalene that poured out perfume onto Jesus’ feet, but rather Mary of Bethany. Although the account is recorded in all of the Gospels, Mary Magdalene is never specified.

"A woman in that town who lived a sinful life learned that Jesus was eating at the Pharisee’s house, so she came there with an alabaster jar of perfume. As she stood behind him at his feet weeping, she began to wet his feet with her tears. Then she wiped them with her hair, kissed them and poured perfume on them." Luke 7:37 NIV

It’s also proposed that by confusing the two, and inaccurate version of a promiscuous Mary Magdalene circulated. It certainly makes sense for Mary to pour out perfume at Jesus’ feet. She’s often given credit for understanding the teachings of Jesus’ more than anyone else. So when he explains to a haughty Judas that “you will always have the poor, but you will not always have me,” it may seem plausible to give light to the possibility that it was, indeed, the same Mary Magdalene who was delivered from seven demons.

Our Bible dictionary explains, "Mary Magdalene has become the type of a class of repentant sinners; but there is no authority for identifying her with the ‘sinner’ who anointed the feet of Jesus in Luke 7:36-50 either is there any authority for the supposition that Mary Magdalene is the same as the sister of Lazurus." There is no Bible reference suggesting that she was involved in prostitution or an immoral past.

Was Mary Magdalene a Part of Jesus' Ministry?

"After this, Jesus traveled about from one town and village to another, proclaiming the good news of the kingdom of God. The Twelve were with him, and also some women who had been cured of evil spirits and diseases: Mary (called Magdalene) from whom seven demons had come out; Joanna the wife of Chuza, the manager of Herod’s household; Susanna; and many others. These women were helping to support them out of their own means." Luke 8:1-3 NIV

The “resources” provided as a part of the support of Jesus’ ministry in Luke’s Gospel account suggests that Mary might have been wealthy. “All Women of the Bible” defines the meaning of “Magdala” as ‘tower’ or ‘castle.’

It may be that “the Magdalene” was connected with the industry of the town for it would seem as if she was not without means, enabling her to serve the Lord with her substance (All the Women of the Bible.) How leveling it must have been to be struck with seven demons, regardless of her place in society. But it does help us understand what fueled her generosity and dedication, giving what she had, to Jesus’ ministry after she was freed of her ailment.

“Jesus went throughout Galilee, teaching in their synagogues, proclaiming the good news of the kingdom, and healing every disease and sickness among the people.” Matthew 4:23 NIV

Women in Jewish society did not typically carry important roles, which makes their involvement in Jesus’ ministry more radical than normal for the time they lived in. In every stage of His steps on earth, He modeled love for all, even the least in society. The NIV Cultural Backgrounds Study Bible states, “Although women in general had fewer resources than men, some were wealthy, and some scholars estimate that a tenth of all patrons in antiquity were women.”

How did Mary Magdalene know where Jesus was buried?

“Some women were watching from a distance. Among them were Mary Magdalene, Mary the mother of James the younger and of Joseph, and Salome.” Mark 15:40 NIV

“Mary Magdalene and Mary the mother of Joseph saw where he was laid.” Mark 15:47 NIV

Mary remained until Jesus’ body was taken down from the cross, and followed to witness Joseph of Arimathea’s burial of Jesus.

“Mary Magdalene and the other Mary were sitting there opposite the tomb.” Matthew 27:61 NIV

She stayed to watch Jesus’ burial, and so knew the exact location he had been laid to rest. Mary knew the path so well, that she was able to trace her steps back there in the dark days later. The NIV Cultural Backgrounds Study Bible states, “Mary’s travel to the tomb in the dark, even though she is not from Jerusalem, requires serious commitment.”

“The women who had come with Jesus from Galilee followed Joseph and saw the tomb and how his body was laid in it.” Luke 23:55 NIV

What must it have been like for Mary to witness an empty grave? Kelly Minter puts it beautifully in her article “Follow the Women at the Tomb:”

“Mary sat with her tears long enough to peer into the tomb and see something the men hadn’t seen. Angels. They asked her why she was crying. She gave the most telling answer: ‘They have taken away my Lord.’" (John 20:13)

What happened to Mary Magdalene after the resurrection?

“Now it was Mary Magdalene and Joanna and Mary the mother of James and the other women with them who told these things to the apostles.” Luke 24:10 NIV

Mary was the first to tell the full gospel story. When the angels told her to “go” in Mark 16:7, she became the first to feel the call and pull of Christ on her life to tell of His resurrection. Women were not called to testify in that age, and their word didn’t lend credibility to any historically recorded event. Why would Christians place these women at the center of the Gospel account — in a society where women were not held in equal regard to men? Some early documents give credit to Simon Peter for seeing Jesus first and suggest it aggravated him that Mary was so close to Jesus.

Many of the disciples and Apostles lived lives of evangelism, many becoming martyrs for the early establishment of Christianity. What about Mary Magdalene? Her powerful witness of Jesus Christ was undoubtedly put in place to strengthen the faith of others. There are some that claim she married the apostle John, others that she accompanied him to Ephesus. Still more say that she evangelized southeastern France and spent her last 30 years in an Alpine cavern. There are still more stories and legends, including one legend that tells a story of she and other disciples being stranded on a rudderless boat in the middle of the sea and miraculously coming ashore.

But legends aside, one thing is certain. This woman held a special place in the story of Christianity and she was placed there by God.

Through her eyes, we learn a little more about who Jesus was. He found her in her darkest place and healed her miraculously. She was one of His friends and a faithful follower. Mary’s actions perhaps spoke the loudest, supporting Jesus’ ministry with all she had to give. To what she thought was the bitter end, she gave her life to follow Him and care for Him. The sweetest note of her story is not knowing that her Savior stood before her in that empty grave. She was so side-swept by her grief that she didn’t realize He was standing before her.

"At this, she turned around and saw Jesus standing there, but she did not realize that it was Jesus.
He asked her, 'Woman, why are you crying? Who is it you are looking for?'
Thinking he was the gardener, she said, 'Sir, if you have carried him away, tell me where you have put him, and I will get him.'
Jesus said to her, 'Mary.'
She turned toward him and cried out in Aramaic, 'Rabboni!' (which means 'Teacher').
Jesus said, 'Do not hold on to me, for I have not yet ascended to the Father. Go instead to my brothers and tell them, ‘I am ascending to my Father and your Father, to my God and your God.’' " John 20:14-17 NIV

For more verses about the resurrection of Jesus Christ, click here. 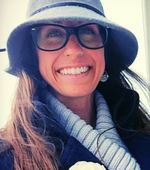 Meg Bucher writes about everyday life within the love of Christ on her blog, https://sunnyand80.org. She is a stay-at-home mom, freelance writer, blogger, and author of, “Friends with Everyone …Friendship Within the Love of Christ.” She resides in Northern Ohio with her husband of eleven years, two daughters, and their Golden-doodle.