When Is Saint Patrick's Day?

Though there were Christians existing in Ireland before St. Patrick’s mission, there was not a missionary movement to convert the whole country. Patrick was a missionary in Ireland for 40 years with other monks, and the country as a whole converted from Druid/pagan practices to Christianity in 432 AD. St. Patrick preached the gospel faithfully, even to those who wanted to cause him harm, and he gave all credit to God for any accomplishments attached to his name.

St. Patrick was not Irish and Patrick (or Patricius) was the name he took at the monastery.

He grew up in Roman Britain (though it’s possible he was born in Scotland or France around 386 AD).

At the age of 16, he was kidnapped by pirates and brought to Ireland as a slave to do farm work.

After a dream from God, he escaped on another ship and landed in France in 408 AD.

He went to a monastery and became a deacon in the Catholic Church in 418 AD.

Later, God led him to return to Ireland with a group of monks to preach the gospel.

By the time of his death, he had founded 300 churches with approximately 120,000 converts.

More to the Story of his return to Ireland:

Upon his return, Patrick faced the Irish Chieftain Loigaire and his Druid priests; having been a slave there previously, Patrick had learned the local language and was able to proclaim the gospel boldly in their native tongue. Astonished, the chieftain not only granted them religious tolerance but asked to be baptized and donated land for their first church as well.

St. Patrick did, however, face repeated opposition and persecution from the Druids. He faced many life-threatening situations, but he always preached that God’s power was greater and many more chieftains were converted. He did not have the same education as some, so he used illustrations like the three-leafed clover to help him explain the Trinity (some dispute this claim). His gospel ministry resulted in vast numbers of conversions, which began an Irish missionary movement. These missionaries would later re-evangelize Europe. You can’t read about the life of St. Patrick and not see God’s hand in every moment. (Paraphrased and sourced from Crosswalk’s The Life of St. Patrick by William Federer)

You can read St. Patrick’s story in his own words here.

“Legends say that St. Patrick drove out all the snakes of Ireland. But the reality is, there were never any snakes there to begin with. Historians believe that this story is actually related to the fact that St. Patrick bravely stood up against the pagan gods and the king's command to worship them, thus driving out dark forces.”- Debbie McDaniel

What Do People Do on St. Patrick’s Day?

Some families attend Mass, cook special foods like cabbage and Irish bacon or corned beef and Irish soda bread, and in the afternoon many celebrate with parades and parties. Lenten fasting requirements would be lifted for the day, so people could celebrate and feast. Today there is a stigma of heavy drinking associated with St. Patrick’s day celebrations, but Irish law used to mandate that pubs be closed on March 17 and that didn’t change until the 1970s.

“Interestingly, however, the first parade held to honor St. Patrick’s Day took place not in Ireland but in the United States. On March 17, 1762, Irish soldiers serving in the English military marched through New York City. Along with their music, the parade helped the soldiers reconnect with their Irish roots, as well as with fellow Irishmen serving in the English army." -History.com

Larger St. Patrick’s Day parades didn’t pick up until the mid-1800s when several Irish aid societies organized an official New York City parade. The New York City St. Patrick’s Day Parade is the world’s oldest civilian parade and the largest in the United States, according to History.com. And in 1995 Ireland began to capitalize on the festivities realizing that they could drive tourism and promote Irish culture to the rest of the world. Multi-day celebrations take place in Dublin with plenty of activities.

Why the Color Green?

Everyone knows if you don’t wear green on St. Patrick's Day you’re going to get pinched...too many times did I learn that lesson the hard way in elementary school; fortunately, adults pinching other adults for not wearing green is frowned upon. Though, many find it fun to dress up in green for camaraderie with the Irish and others who enjoy the festivities. You can find green beer, green Irish soda bread, green cookies, doughnuts, milkshakes, etc. and in Chicago even a green river for a few hours (a practice that started in 1962). How did green become the color though, was it St. Patrick’s favorite color or the green landscape of Ireland?

It is said that St. Patrick’s favorite color was actually blue and that he wore it often, a painting depicts him wearing blue as well. A light blue color, chosen to differentiate it from the more royal blue color that Ireland previously used for its flags, was originally associated with St. Patrick.

Ireland is known as the Emerald Isle with lush green vegetation, including green shamrocks, often a symbol for Ireland. However, Time.com reveals that the tradition for green has more to do with politics than plants. During the Great Irish Rebellion of 1641, a military commander (Owen Roe O’Neill) used a green flag with a harp to represent the Confederation of Kilkenny (a group that was later defeated by Oliver Cromwell). In the 1790s the color green was used again by the Society of United Irishmen as part of their uniforms (green shirt/coat, green and white striped trousers, and a green felt hat). Though the uniform did not continue, the color green did; it was also spurred on through poems and ballads, the most well-known being “The Wearing of the Green” written by Dublin-born Irishman and playwright Dion Boucicault (1820-1890).

Traditionally when it comes to political and religious groups, which are usually connected in Ireland, the Protestants wear orange and the Catholics wear green. The Irish flag is represented with a green stripe on the left, white in the middle, and orange on the right. In the United States, it was the Irish immigrants who kept up the tradition of wearing green out of pride for their homeland.

OurCatholicPrayers.com states, “According to tradition, St. Patrick wrote it in 433 A.D. for divine protection before successfully converting the Irish King Leoghaire and his subjects from paganism to Christianity. (The term breastplate refers to a piece of armor worn in battle.)

More recent scholarship suggests its author was anonymous. In any case, this prayer certainly reflects the spirit with which St. Patrick brought our faith to Ireland! St. Patrick's Breastplate, also known as The Lorica of Saint Patrick was popular enough to inspire a hymn based on this text as well. (This prayer has also been called The Cry of the Deer.)”

A Prayer Attributed to St. Patrick:

"As I arise today, may the strength of God pilot me, the power of God uphold me, the wisdom of God guide me.

May the eye of God look before me, the ear of God hear me, the word of God speak for me.

May the hand of God protect me, the way of God lie before me, the shield of God defend me, the host of God save me.

May Christ shield me today. 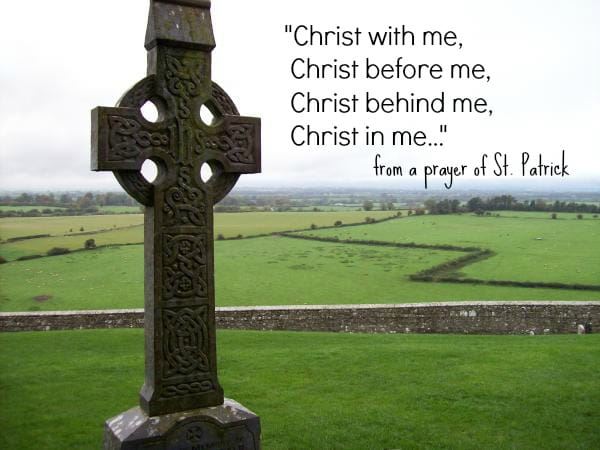