The Kingdom of Heaven on Earth: Are We Preaching Half the Gospel?

Sadly, most rarely think about the kingdom, much less speak about it. This, however, was not the case for Jesus.

For Him, the kingdom of heaven was the predominant topic of His ministry. His message about the kingdom was more than a reminder to obtain your ticket to the great Disney World in the Sky—something it would seem many Christians are hoping and waiting for.

Is our obsession with leaving this world and transporting to heaven the same message Jesus taught on the kingdom in the Gospels? Are we talking about the same concept?

Let’s not focus only on heaven at the expense of an abundant life now.

I believe we may have a kingdom conundrum on our hands and don’t know it.

Let’s answer a simpler question first: Why did Jesus come to Earth? You might respond, “To show people how to avoid hell and enter heaven.” While this was a subset of His earthly agenda, we undervalue the thrust of Jesus’ ministry message when we focus on the future at the expense of the present.

When Jesus speaks of the kingdom of heaven in the Gospels, He envisioned God’s kingdom rule and reign in the present day on Earth, not just a day when believers would be ejected into the spiritual realm.

Sadly, this misunderstanding has plagued and paralyzed believers from experiencing the “abundant life” that Jesus promised (John 10:10).

By focusing on one aspect of our salvation, we, whether knowingly or unknowingly, minimize other aspects of our Christian Life. If justification is the entirety of our salvation experience, believers miss out on the joy and purpose of sanctification. Dallas Willard summarizes it this way:

The background assumption is that justification is the entirety of salvation. If you are justified— your sins forgiven—then you are saved and you will be “okay” after your death. I submit to you that this is what is offered, in still more specific forms, by current efforts (“evangelism”) to convert people to Christianity, and it is what people generally understand to be essential to the transaction.

We are saved not just from the world, but for the world.

If the purpose of Christianity is just to enter heaven, Jesus wouldn’t have left us on Earth after He saved us. We’d be raptured without a second to spare to enjoy eternity with Him. Surely the purpose of the kingdom of heaven is greater than just achieving eternal life.

In fact, our obsession with getting to heaven could be paralyzing, even problematic. I heard someone say once, “When you’re so heavenly minded, you can become no earthly good.” When believers are self-absorbed, only focused on their own eternal rewards in heaven, we lose sight of our calling on Earth.

Jesus gave us a Commission to make reproducible followers of Him. It’s called the Great Co-Mission for a reason: God expects our involvement.

The reason He didn’t eject us into the elysian fields of paradise the moment we were born again is because there’s work to be done. You were saved not just from the world, but for the world.

More than a decision, we should introduce people to a life of discipleship.

Most evangelistic tactics move people toward making a decision or a convert; however, Jesus and His disciples focused on making disciples. New birth is necessary to move from life to death, but it doesn’t end there.

Derwin Gray, pastor of Transformation Church, told me in a phone conversation, “The Apostle Paul wouldn’t understand the invitations issued at the conclusion of many services today.” Raise a hand, walk an aisle, say a prayer, and repeat after me are foreign concepts to the apostle. I’m not necessarily arguing for or against any of these methods. My point is that they should not be an end in themselves, but a means to introducing people to a life of discipleship.

Sadly, we have reduced salvation to a transaction where if sinners provide the correct answers to a mental, spiritual questionnaire and say “Amen” at the right spots, we pronounce they are saved with nothing else required of them.

Whether they follow Jesus after saying this prayer is optional.

Whether they enjoy the blessings of the kingdom is up to them.

Whether they replicate their lives into the lives of others is a choice, and the choice is typically no.

We’ve failed to see that salvation in Christ starts from a confession to follow Jesus, but it doesn’t end there. Jesus expects so much more; He commands so much more.

In this model, spiritual disciplines in the Christian life become recommended but not required activities. Obedience is optional, reading the Bible is optional, and memorizing Scripture is optional. Praying and fasting are optional as well. Whether I share the gospel with a lost person is merely a choice I make.

Surely this can’t be what Jesus envisioned when He commanded His followers to “make disciples of all nations”?

Surprisingly, moving people through a process from making a decision to becoming a maturing follower of Jesus is foreign in many churches today. An escapism mentality, on the other hand, permeates our evangelistic conversations: “You don’t want to go to hell do you? It’s hot down there. Choose heaven so you can spend eternity with God.”

While this is true, is it the whole gospel?

For many years, we have preached half the gospel by encouraging people to be saved from something—namely sin, wrath, damnation, and eternal punishment—and neglected the fact that we’re saved for something. 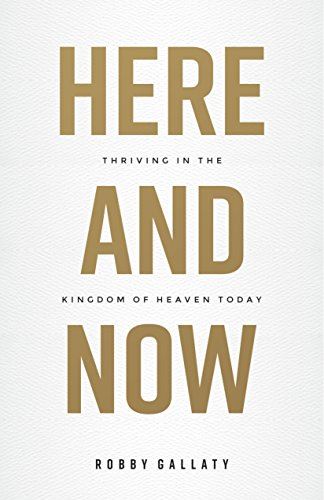 This article is an excerpt from Here And Now: Thriving in the Kingdom of Heaven Today by Robby Gallaty (B&H, 2019). Used with permission. We have been taught that salvation is getting man out of earth to live in heaven, but the Bible teaches that God desires to bring heaven to earth through man. Jesus spoke about the Kingdom of Heaven more than any other topic. Learn how God’s Kingdom can invade your life today.

Robby Gallaty is the Senior Pastor of Long Hollow Baptist Church in Hendersonville, TN. He was radically saved out of a life of drug addiction on November 12, 2002. In 2008, he began Replicate Ministries to equip and train men and women to be disciples who make disciples. He is also the author of numerous books. He and his wife Kandi have two boys.