One of the most impressive architectural projects of the Renaissance era is the Florence Cathedral in Italy, home to the Duomo. It’s the equivalent of four football fields long in either direction and when it was completed in the 1400s, it was a hub of spiritual life for Christians.

People were baptized by the thousands in Jesus’ name! Over 20,000 people could pack the place. But if you ask a tour guide today (and I did) how many this Gothic masterpiece draws to worship on a typical Sunday nowadays – the answer is shocking: 12 people.

A Church Can Decline from a Movement to a Museum

Those 12 senior citizens also sell tickets and postcards to tourists. Sadly, a church that was once the nerve center of a vibrant gospel movement is now a museum. Europe is full of empty church buildings, but this pattern of ministry decline is accelerating in North America, too.

Most churches are born out of an energetic gospel movement with a laser focus for winning the lost. Churches like this can experience explosive growth, akin to how the early church began. But over time, every movement levels off.

The focus subtly shifts from pioneering the future to preserving the past. In essence, the church becomes a museum.

In a ‘museum ministry,’ people object to new ideas that might upset the status quo. These churches are no longer reaching the lost; they’re preaching to the choir. Core families keep things afloat, but they’re running on the glory of past successes instead of introducing the changes necessary to regenerate gospel vibrancy.

Lifeless Traditions Can Turn a ‘Museum’ into ‘Morgue Ministry’

Unfortunately, it gets worse. In a ‘morgue ministry,’ there’s no momentum left to resurrect the church. There are no new families or young adults attending. There are no dreams for the future. Churches like this have become irrelevant to the surrounding community, which is often desperately in need of Christ’s living water, not lifeless traditions.

Once upon a time, this church may have flowed with the Spirit, but now it’s stuck. In North America, this is a condition that’s becoming more common. Some 80 percent of churches are categorized as plateaued or declining – no longer keeping pace with the growth or demographic changes in their surrounding community.

Are Your Leaders Risk-Takers, Caretakers, or Undertakers?

As go the leaders, so goes the church. In the early days of a new church, or during a time of renewal, the role of the leader is to be a risk-taker. In the early days of Liquid Church we were willing to do anything short of sin to reach a new generation for Christ. We weren’t afraid of trying half-baked ideas and boldy failing forward!

But as leaders and the ministry age, if they aren’t careful, they can shift into museum mode. Now the pastor moves from risk-taker to caretaker of a facility and dwindling congregation.

Eventually, Leaders May Move Into the Final Stage: Undertaker 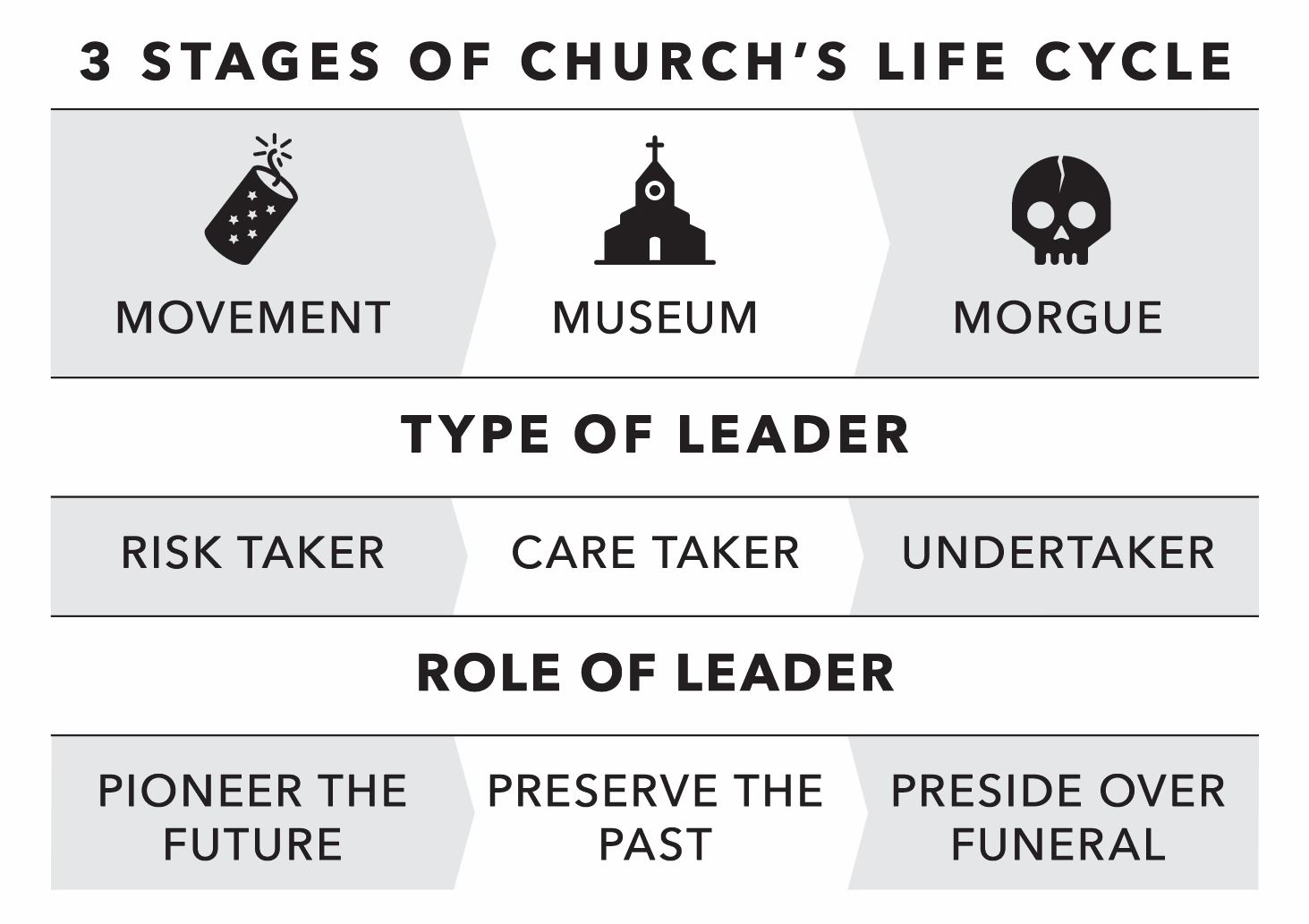 The question is: which kind of leader are you right now?

The Challenge of Change

A church can lose its sense of mission in order to preserve tradition!

If you sense that you’ve become a caretaker or undertaker, what can you do? There are two strong options. Become a risk-taker once again or partner with one. Either way you will need to turn to a younger generation of leaders.

Seniors Lead By Risk-Taking and Investing in New Leaders

Risk-takers are willing to engage in some research and development – exploring options for revitalization. In fact, that’s how Liquid Church was born. A few years out of college, my wife and I attended the 150-year-old Millington Baptist Church where we were a rare commodity: 20-somethings.

So, we were surprised when the senior pastor, Dr. Peter Pendell, asked us to lead a Sunday school for young adults. Who would attend? There were only eight of us! But, that was the point. The church was becoming a museum and he wanted to create an avenue for us to reach our non-Christian friends and co-workers.

He gave us the freedom to create a culturally engaging curriculum; tackling topics like sex, money, purpose, marriage, and more. And our gathering grew until it was too large for the church basement. So, he said ‘yes’ to our hosting the group at a local tavern.

Later he said ‘yes’ to our transforming the sanctuary on Sunday evenings to host our growing gathering. He defended us to critics as we experimented with modern music, concert lighting, and couches on stage. To reach 20-somethings, Peter turned to 20-somethings. He knew the church needed to speak their language, sing their style of music, and dress like part of their culture.

Peter became a risk-taker, investing in new leaders and new approaches that would ultimately result in hundreds of young adults flocking to church on Sunday evenings. Risk-takers are willing to challenge the status quo, partnering with young leaders to reach an unreached tribe right across the street.

Consider A Merger with a Vibrant Church

Even a ‘morgue ministry’ can begin a new life cycle. Dying churches can be rebirthed! A rebirth is what happens when a struggling or dying church gets a second life. This can occur when it is restarted under the guidance and support of a stronger, vibrant, and typically larger church. In fact, more than one in three new campuses in multisite churches across North America are birthed through a merger.

A rebirth isn’t about erasing the identity or the heritage of a church. It’s actually resurrecting the dream of the founders to inject the community with fresh hope and vision for the future.

Again, I can speak about this from experience. Our fourth campus was a rebirth. Liquid was approached by the leaders of a historic, 191-year-old church that was considering closing its doors. The congregation of a few dozen was no longer viable as a self-sustaining church.

It took courage and honesty for the church to recognize that change was needed, and to turn their church and assets over to a new generation of leaders in a rebirth.

If a leader is willing to sacrifice what’s familiar and partner with risk-takers to reach a new generation, God can jump-start a new season of Spirit-empowered ministry. With grace and courage, the leaders of Mountainside Gospel Chapel heroically passed the baton to their kids and grandkids and Liquid Church.

The music, media, and dress code may all be different, but we were both Bible-based and Christ-centered churches. And we loved people. On our Grand Re-opening, one thousand people poured through the doors – all because a group of 27 seniors were willing to sacrifice their comfort and take risks for the gospel again.

Every year in America, more than 3,500 churches close their doors. The rising tide of ministry mergers offers a hopeful alternative – generational transfer. This is not a call to rush things or to try and make a merger happen. Just be open to the idea.

The current wave of healthy, successful mergers sweeping across our country presents a unique opportunity for declining churches to start a new life cycle.

Maybe the life stage and calling of your church is different. You may be in a position to come alongside another church in your area, playing the role of stronger, older brother. Often, one church has the energy and personnel, and the other church has a great location and better inroads into the community.

Work together to bring living water to your area.

Perhaps you have individual ministries that are graying and need revitalizing. Maybe your staff and volunteer leaders need to be more intentional about finding and mentoring a new generation of apprentices, interns, and ministry residents.

Whatever you do, don’t limit your millennials and gen Z members to college or student ministry.

Trust God and give them a seat at the table earlier than you feel comfortable with. Be intentional about developing new musicians, teachers, evangelists, administrators and those with gifts of compassion. Set the stage for generations to unite around Jesus to saturate their city together!

Tim Lucas is the founder and lead pastor of Liquid Church, named one of America’s 100 Fastest-Growing Churches by Outreach magazine (2019). Since launching in 2007, the innovative church has grown to 7 locations across New Jersey with 5,000 people in attendance and more than 2,400 baptisms to date. Tim is the author of Liquid Church: 6 Powerful Currents to Saturate Your City for Christ (Zondervan) which outlines best practices for revitalizing churches, ministry mergers, and uniting the generations to serve Jesus together.