What Is Gluttony, and Is it a Sin?

Food sustains the body, giving it what it needs to function properly, and if prepared correctly can be a delightful experience. However, it can become such a big part of a person’s life that it controls their life, and eating becomes a top priority. When food becomes so important it is called gluttony, or “habitual greed or excess in eating.” In the Bible, gluttony is condemned as a sin which consumes the body and the soul.

In Scripture, excessive eating is shown in conjunction with wicked behavior and men living in sin. As with all things of earth, food can become an idol and a hindrance to the believer, or a blindfold to someone who does not know Jesus, preventing that person from getting to know the Lord.

There are many things in this world that are for the benefit of humanity that can become a distraction, a hindrance, or an idol that replaces God in someone’s heart. From romance, to money, to even the bare necessities, anything can become an obsession of which one consumes too much.

Gluttony is one of the seven deadly sins, a collection of seven sins that people identify as some of the biggest stumbling blocks in people’s lives. The seven sins are called deadly, in part, because of their consuming and destructive potential.

Gluttony, is the sin associated with an unhealthy indulgence in material delights, usually food. However, it is not just eating to excess, but it can include drinking, screen time, lustful thoughts and behaviors, and similar types of obsessive love of material pleasure. It is creating an idol out of something material, often consumable.

Committing idolatry violates the Ten Commandments: “You shall have no other gods before me” (Exodus 20:3). While gluttons usually do not create carved images of their idol, they do engage in behavior that God forbids. These are associated with the call not to make a carved image; they may, “bow down...or serve” their obsession by doing whatever it takes to consume it.

Understanding what gluttony is not can be just as crucial as knowing what it is. It is not necessarily related to weight. Just because someone struggles with their weight does not mean that person is a glutton. There could be medical reasons someone is overweight. Having unhealthy habits is not gluttony either. Some people have developed unhealthy eating and drinking habits over the course of a lifetime, but they do not eat that way because they idolize the food. It is also not an obsession due to a compulsion or an anxiety disorder, where the person over-indulges in something because they feel they have to do so to relieve an excess of anxiety. Gluttony may evolve into that, but it begins with an inappropriate love of whatever the person consumes.

The popular image of gluttony is often one of a person visibly, openly, consuming food and drink and bearing the hallmarks of that indulgence, such as being overweight, drunk, and lascivious. While there may be some who struggle with gluttony who fit this stereotype, many do not. In daily life, gluttony begins in the heart, where someone begins to love a material indulgence more than they should.

If a believer receives an answer to prayers, and the first instinct is to celebrate with food, and not thank the Lord, that may be the roots of gluttony. As that indulgence is encouraged, life choices begin to revolve around it. Planning one’s day around that indulgence is another indicator. It can become so serious that people choose their vice over other people, lash out at others, and prioritize it over everything else. Believers and nonbelievers alike can shove aside people, work, and other priorities for the sake of food, more screen time, or whatever they have made an idol. 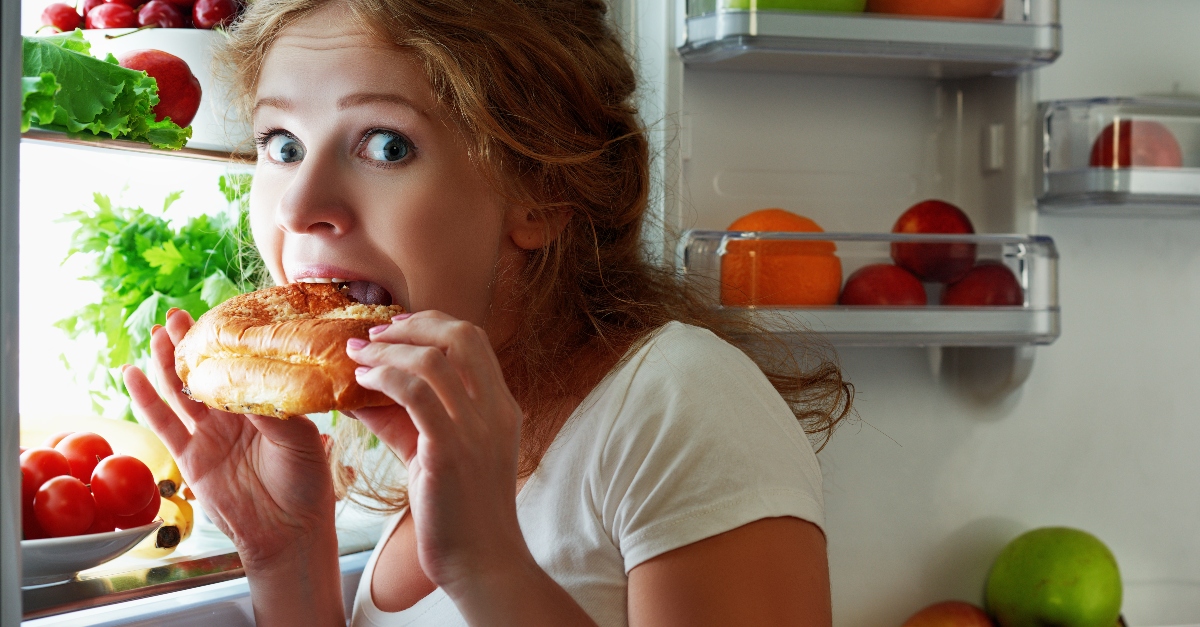 Is Gluttony Just Regarding Food and Drink?

Part of why food is so strongly associated with gluttony is because for most of human history, food was the most important consumer commodity. Even in parts of the world today where food resources are scarce, the ability of those who can eat to over-indulge is very noticeable. It was the person who ate giant feasts while the poor begged just outside the gate, such as the rich man in the story Jesus shares in the Gospels about the rich man and the poor man Lazarus in Luke 16:19-31. It was the person who could eat to sustain themselves, but chose to eat to excess.

Gluttony can manifest in other arenas, as it is mostly associated with the sin of losing control, and letting the flesh dictate contrary to the Word of God. Paul wrote “But I discipline my body and keep it under control, lest after preaching to others I myself should be disqualified” (1 Corinthians 9:27). When the body is in control, it just wants to consume, and does not let the logical mind, or the Holy Spirit, make the guiding decisions.

If anything material or fleshly is in control, then there is gluttony. Another way to look at it is through the verb form of the word, to glut. Glutting oneself on something is to fill to excess. The person no longer needs whatever he or she is consuming but continues to do so.

Is Gluttony a Deadly Sin?

Most people know gluttony is one of the seven deadly sins. While there is no cohesive list of “seven deadly sins” in the Bible, Pope Gregory I created the list as a marker of the sins which give rise to all the other vices. The Bible describes gluttony as a path towards self-destruction.

Paul wrote to the Church at Philippi by saying of enemies of the cross, “Their end is destruction, their god is their belly, and they glory in their shame, with minds set on earthly things” (Philippians 3:19). Here the distinction between bad habits and the sin of gluttony is clear - in the life of a glutton, their desire is their god. For some, it can even become a substitute for relationships, self-worth, and worship of the Lord.

When considering the way the term “deadly sin” is used in common language, gluttony is deadly both spiritually and physically. Overeating can lead to bad health and diseases such diabetes and high-blood pressure that can lead to death. Studies show that too much screen time can cause eye-strain, back pain, and addictive behavior. Gluttony can lead to spiritual death, as the consumption puts up greater and higher barriers to a right relationship with God.

Not only has this person set up an idol in the heart, but this individual is rejecting one of the fruits of the Spirit - self-control. Gluttony can lead to an irresponsible lifestyle, as the individual spends too much money on over-indulgence, and a constant cycle of debt is commonly associated with the sin. The Book of Proverbs warns, “Be not among drunkards or among gluttonous eaters of meat, for the drunkard and the glutton will come to poverty, and slumber will clothe them in rags” (Proverbs 3:20-21). The inability to stop oneself from eating too much, or any other gluttonous behavior, is a rejection of temperance, and often consideration for other people.

Because of the negative health effects gluttony can have, it is also mistreating the body. The Bible says, “Or do you not know that your body is a temple of the Holy Spirit within you, whom you have from God? You are not your own, for you were bought with a price. So glorify God in your body” (1 Corinthians 6:19-20). By treating the body as merely a vessel for indulgence and material enjoyment, the glutton ignores the spiritual parts of life.

Some Bible verses about overindulgence include:

Ephesians 5:18 “And do not get drunk with wine, for that is debauchery, but be filled with the Spirit.”

1 Corinthians 5:11 “But now I am writing to you not to associate with anyone who bears the name of brother if he is guilty of sexual immorality or greed, or is an idolater, reviler, drunkard, or swindler—not even to eat with such a one.”

Proverbs 25:27 “It is not good to eat much honey, nor is it glorious to seek one's own glory.”

Is It Wrong to Enjoy Things or Treat Yourself?

It can be easy when looking at the seven deadly sins to decide the best thing to do is live on bread and porridge, denying oneself any semblance of earthly pleasure. God’s Word does not encourage this mentality, instead encouraging temperance. Rather than denying the body good food, or entertainment, enjoy it to satisfaction, and then put it away. Eat until the body is satisfied; watch a set amount of media, and then turn it off.

When meditating on the life of a man, King Solomon mused, “Behold, what I have seen to be good and fitting is to eat and drink and find enjoyment in all the toil with which one toils under the sun the few days of his life that God has given him, for this is his lot” (Ecclesiastes 5:18).

God gave man good thighs including tasty food, sex, and laughter. Living in moderation, gratitude for God’s gifts, and Biblical boundaries is living appropriately. It is okay to treat yourself and indulge from time to time, as long as it is not harmful to oneself, others, or one’s testimony.

Gluttony is the sin of over-consumption, of indulgence, and of inevitable self-destruction. God wants to be first in everyone’s lives, and the flesh should never take His place. Humanity was made for more than to merely serve physical appetites. Believers are called to, “Set your minds on things that are above, not on things that are on earth” (Colossians 3:2), and that, “You, however, are not in the flesh but in the Spirit, if in fact the Spirit of God dwells in you” (Romans 8:9a).

Strive to put God first, and to keep the desires of the flesh in their proper place.

Bethany Verrett is a freelance writer and editor. She maintains a faith and lifestyle blog graceandgrowing.com, where she muses about the Lord, life, culture, and ministry.