What Happens When God Forces Us to Rest

When we got our three Labradoodles, I was surprised when my wife Jean purchased a crate for each of them.

“How can we put them in cages?” I asked. “They want their freedom!”

Jean patiently informed me the dogs longed for the forced constraint of being in their own enclosed spot. In that crate, they would accept their limitations.

They would no longer act with their otherwise natural “we are tough guard dogs” instincts, however comical it is for these sweet, furry, domesticated creatures to imagine themselves like Jack London’s fierce White Fang.

They wanted to roam and run but were released to relax and rest in their crates.

In a similar vein, around 1000 BC, Israel’s King David composed his most famous work—Psalm 23. Many of us know how it begins: “The Lord is my shepherd.” I’ve read or recited that psalm hundreds of times over the years, but I recently noticed something I hadn’t observed before.

Why did David say, “He makes me lie down in green pastures, he leads me beside quiet waters”? Why must the shepherd—David’s reference to God—“make” and “lead” him to do things that seem desirable, even idyllic? Did David not want peace, beauty, rest?

While scholars of ancient Hebrew history aren’t certain what was happening in King David’s life when he wrote this psalm, what is known about his life, in general, is that he had enemies near and far.

We also know that as a result of these many enemies, David was frequently on the run, either chasing off an enemy or running from one.

While there are certainly accounts of David enjoying the benefits of being a king, his life was busy and burdened. In numerous other psalms, he admits to being exhausted and demoralized.

While we aren’t ancient Israeli kings constantly fending off giant and regular-size adversaries, we can relate to King David’s feelings of exhaustion and demoralization.

Most of all, we can relate to needing someone to make us lie down in green pastures and lead us beside quiet waters.

We’re not very good at finding those green pastures and quiet waters ourselves. While COVID-19 forced us all to shift our working rhythms, we are statistically the most overworked nation on the planet.

On vacation, your life can slow down, at least temporarily. We perhaps feel for a week or two the way we’d like to feel all the time.

We soak up the peace for every last minute until we have to return home. But often we return from vacation to find that the raging flow of life has only increased while we’ve been out of the current. And then we’re playing catch-up.

It can sometimes feel that vacation just isn’t worth it.

Obviously, vacations aren’t a waste of our time. But if what we really want is green pastures and quiet waters, then we’re going to need something more than a vacation, especially if half of us who work for a living aren’t even taking one every year. 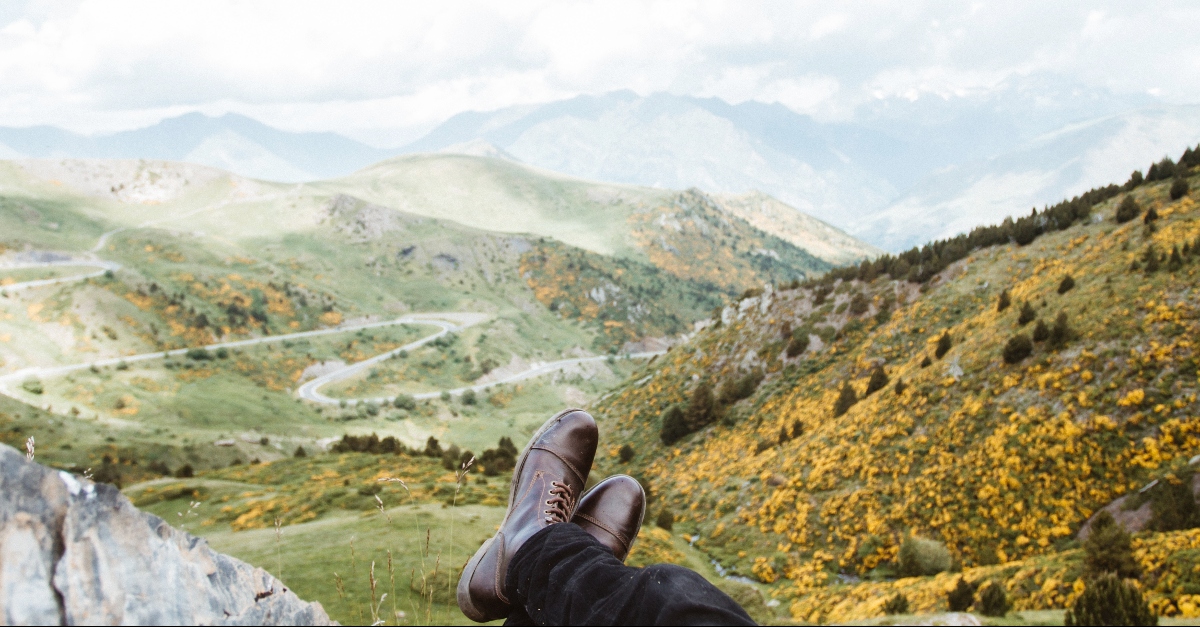 Back to Real Life and the Three Rs

So we returned from vacation and now we feel behind in the life we came back to. We’re buried in overscheduled calendars and an overconsuming lifestyle.

Why do we seem so unable to create lives that reflect the rest, beauty, and simplicity we desire?

We could just conclude that we’re busy, too busy. The end. That would be the easy answer, but it doesn’t help us solve our problem—this inherent urge to chase after something more while feeling an increasing longing for something less.

Maybe we can say it this way: the pace of life is faster than our capacity to take in life. The demands of our jobs, relationships, financial obligations, and more keep life moving like a rushing mountain river in springtime.

How do we move at a speed we are comfortable maintaining, without losing touch with the realities of life?

The solution comes into focus when we consider the purpose vacation is meant to serve in the first place. Let’s call them the R words, and we’ve already touched on the first one: rest.

But there is another R word we associate with vacation that is part of many great moments in life—recreation. Although the general use of the word can mean anything from tossing a Frisbee to playing cornhole, our broad application of it has buried its deeper significance.

The original Latin word is recreāre which generally translates as “create again” or “renew.” The first English use of the word was in reference to refreshing or curing a sick person.

Recreation is fundamentally about re-creating ourselves through activity.

Recreation, when done well, scratches that itch we have for a less complicated, more meaningful life, but in an almost teasing sort of way. It makes less become more, but only for a spell. We get a taste of less and we love it.

Then more takes over again, and we’re back where we started, longing for less.

The Most Important R

What we ultimately need, I believe, is the third R word—renewal. While rest is a temporary break in the action and recreation is an act of temporarily re-creating ourselves and our circumstances, renewal is finding the best form of ourselves, the people we are designed to be.

It is easy to fall into anxiety, hopelessness, sadness, and even anger when you consider the state of our country. We are in desperate need of more than rest and recreation. We need renewal.

We need to strip away the superficial, extraneous, and meaningless to restore our most meaningful lives. In case we forget what renewal looks like, it is everywhere in the natural world around us.

Every year winter comes, and trees are stripped of their leaves and the grass turns brown. Then spring comes. The world is born again. It’s renewed. This is, I believe, a reminder that the work of renewal remains a powerful force—perhaps the most powerful force—in the world.

When we feel barren, we sometimes get into an endless cycle of retreat, feeling that we need to take a month off, take a year off, just quit our jobs, move somewhere slower, and start again.

The truth is that we just need to usher restoration into our lives regularly. No more a little rest here, a little recreation there, and a dose of relief in between.

John Kingston, a lawyer by training and businessman by experience, is a social entrepreneur who has chosen to invest his fortune, inspired by his faith, in awakening America (again) to the values that made her a nation unrivaled in human history. This excerpt is adapted from American Awakening: Eight Principles to Restore the Soul of America by John Kingston. Copyright© 2020 by John Kingston. Used by permission of Zondervan. www.americanawakening.us.