Often, we feel like finding God, seeing Him at work, and experiencing His presence takes hard work. Many believers spend our time searching for the next book, service, story, or special prayer that will bring us closer to Him. It can be a frustrating, frantic, and draining quest for that special something that lets us know we are not alone and that we are truly a part of something greater than ourselves.

There is no need for complicated routines or special spiritual qualifications. When we accept Jesus, we become a part of his kingdom or, even more sweetly put, we are part of his family. His presence, power, and peace live inside of us! What a gift God gives us when he sends his son to usher onto the earth God’s kingdom.

The Kingdom of God can be described as God’s reign and his rule over all things. God is in charge of our universe; he is on his throne and governing all things. God’s purpose for our world is that we would be a part of his kingdom. Thankfully, God sent Jesus to establish his saving rule here on Earth. Jesus died in order to triumph over our sin, death, and Satan. When we are in relationship with him, he reigns in our hearts. God also calls us to gather together as people who are citizens of God’s kingdom. Finally, Christ promises to come a second time to complete his reign by creating a new heaven and new earth. 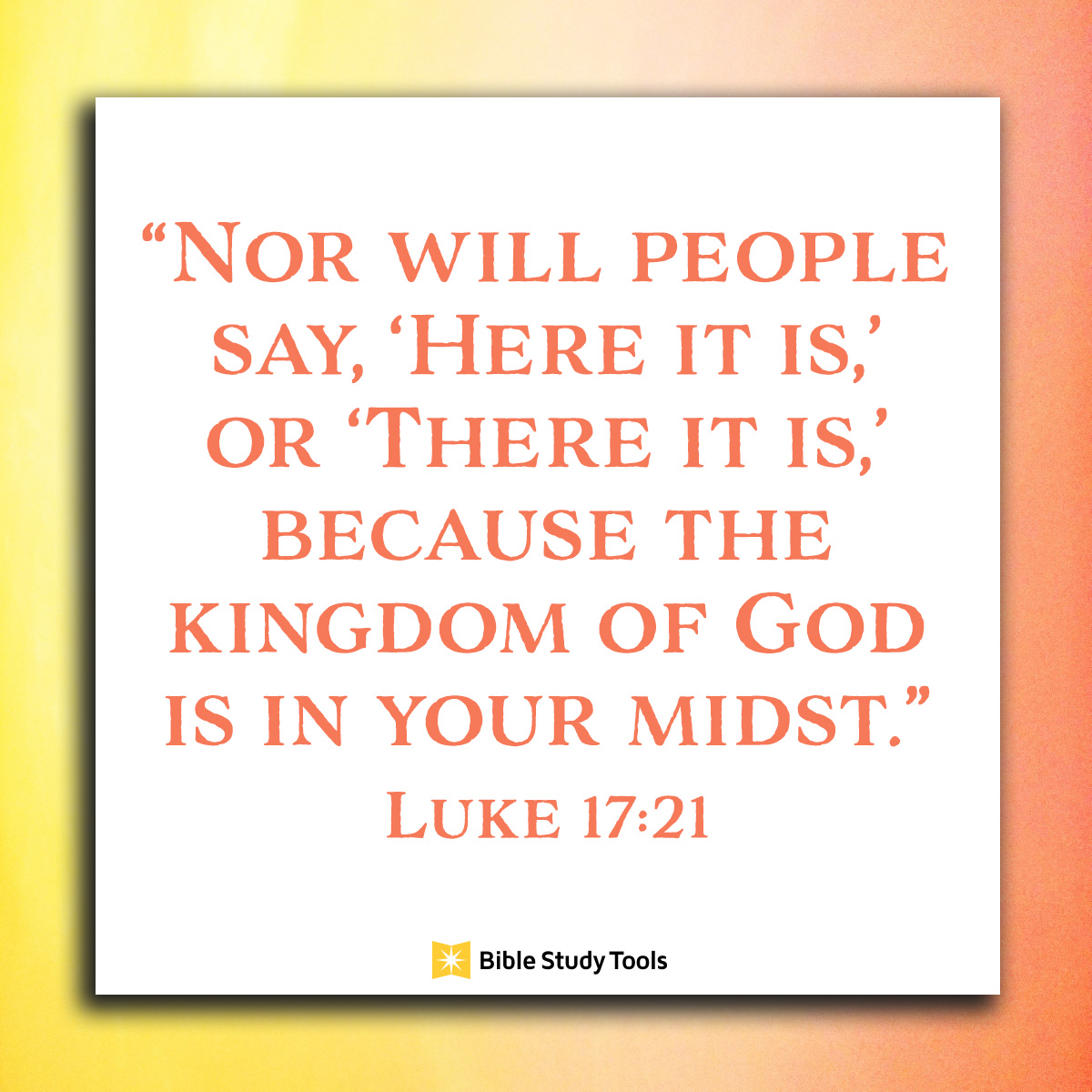 The great mystery about the Kingdom of God is that it is both talked about as something we should anticipate and also something that we have current access to in the here and now. For example, Matthew 6:10 invites us to pray that “God’s Kingdom come and His will be done on Earth as it is in Heaven.” This text reminds us that things are not the way they ought to be here on Earth. Yet, in Luke 17:21 tells us that God’s Kingdom is here in our midst!

How can we both anticipate God’s Kingdom coming but also know that the Kingdom is in our midst? This is possible because God’s Kingdom is God’s reign. He is sovereign and at work in our world to redeem humanity and also at a future time his work will be finished with Christ’s return and subsequent renewal of all creation.

In Luke 17 Jesus was approached by the Pharisees who asked when the kingdom of God would come here on earth. These words were meant to provoke Jesus, prompting him to either prove that he was the Messiah by producing God’s kingdom and if not, then they wanted him to stop claiming that He was the Messiah.

Jews that witnessed this conversation would have been familiar with the kingdom of God. They were knowledgeable about the many prophecies that told of the glory of their coming Savior. They were hungry to see God’s kingdom on earth now! This would have been a conversation that would provoke a reaction from bystanders. They yearned for a Messiah to establish rule on earth.

This statement was Jesus pointing the Pharisees to his divine identity. Jesus was making clear that his presence was what was bringing his kingdom to humanity. They were unable to recognize God’s sent Messiah, who was right in front of their faces.

Even though these Pharisees said they desired the Kingdom of God, they were not able to accept the King. They had other preconceived notions about what God’s Kingdom would and should look like. Their unwillingness to rethink what they thought God should or would do to save his people blinded them from being able to recognize Jesus as their Messiah. Jesus says to them I am right here in front of you but you still can’t see me, making the point that God’s Kingdom is received by those with open hearts.

Are we missing the Kingdom of God at our work because maybe God moving looks different than what we want? Are our hearts open to accept Jesus as ruler over our lives? How can we be part of God’s Kingdom at work on the earth? These are questions that should push us to dig deeper and seek God’s Kingdom a little bit more, every day.

Amanda Idleman is a writer whose passion is to encourage others to live joyfully. She writes devotions for My Daily Bible Verse Devotional and Podcast, Crosswalk Couples Devotional, the Daily Devotional App, she has work published with Her View from Home, on the MOPS Blog, and is a regular contributor for Crosswalk.com. You can find out more about Amanda on her Facebook Page, Blog or follow her on Instagram.