4 Things to Know about Gun and a Hotel Bible, the 'Faith Film for Doubters'

Pete is an agitated young man who is on the verge of committing a violent act.

He has a gun. He has a plan. And moments ago, he checked into his hotel room to spy on the woman he is prepared to murder.

But then something strange happened: He encountered a well-dressed man in his room named Gideon.

“No,” Pete, a skeptic about faith, responds.

Moments later, though, Gideon and Pete are talking – about life, about sports, about faith, and about Pete’s evil goal for the evening.

Gideon tries to change Pete’s mind by offering him the hope found in the pages of Scripture. How will Pete respond?

The new movie Gun and a Hotel Bible, now on home platforms, tells the story of Gideon and Pete in a provocative plot that will attract Christians and non-believers alike. It’s being marketed as the “first faith film for skeptics and doubters.” 1. It Was Inspired by a Beatles Song

The film is based on an award-winning play written by Bradley Gosnell and Daniel Floren, who have worked together for about 10 years on various projects and who star in the film. Gosnell got the idea for the plot from a Beatles song, Rocky Raccoon, that tells the story of a boy who checks into a hotel room “only to find [a] Gideon's Bible.” Rocky had “come equipped with a gun to shoot off the legs of his rival,” the song says.

Both Gosnell and Floren grew up in church.

“I thought that it'd be fun to see a production where Gideon was personified and he had 40 minutes to talk Rocky – who became Pete – out of what he was about to do,” Gosnell told Crosswalk.

The film was co-directed by well-known filmmaker Raja Gosnell, who also directed Big Momma's House, Smurfs and Smurfs 2, and Scooby-Doo and Scooby-Doo 2.

It won for best feature at the L.A. Live Film Festival and took all top awards at the Content 19 Christian Film Festival. Gun and a Hotel Bible is filled with emotions – the anger and despair of a man (Pete) who wants revenge, and the love and anguish of someone (Gideon) who wants to help. There is hope for Pete – but only if he turns from his sinful desires and walks the narrow path Gideon offers.

It shows us how Pete got to this moment, with bad choices and some bad fortune. We feel for him, even though we’re cheering for Gideon to talk Pete out of his horrible deed.

It’s as disturbing as it is entertaining. Thankfully, the script includes multiple comedic moments to break the tension.

Gun and a Hotel Bible is a film about the choices we make and the grace we often reject. It’s a film that will impact each viewer differently, because each character represents multiple segments of the population.

“We love the idea that even though our characters are preaching to each other, the story at least tries not to preach to the audience,” Bradley Gosnell said.

The goal, Gosnell said, is for viewers to have a conversation about the film – what do you think about what Pete said? – “without having to own the weight of, you know, damnation, etc.”

Gosnell and Floren are superb. 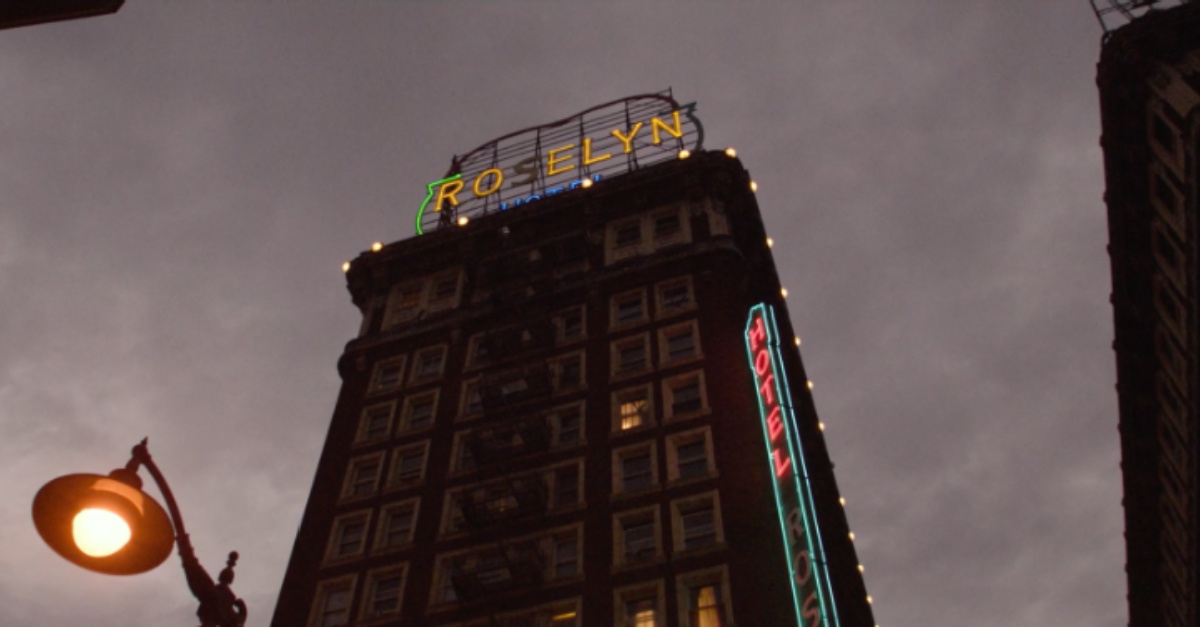 During one of the film’s most poignant moments, the two men engage in a “theological throwdown,” asking tough questions about God and the Bible – and keeping score, too. (If Gideon wins, then Pete has to take him to a Cubs game.)

They discuss a range of questions: Does morality change? Does God change His mind? Is murder always wrong? Did the Israelites of the Old Testament commit war crimes?

Gosnell and Floren said they wanted to be fair to both Christianity and to those who don’t attend church.

“We definitely did some googling” to find tough questions, Gosnell said.

Research involved the subjects of apologetics, humanism and objectivism.

“We actually got to discuss questions that neither of us had really talked about,” Gosnell said, referencing the screenwriting.

Gosnell said they often asked: “What would be a legitimate critique, or counter to this argument?” 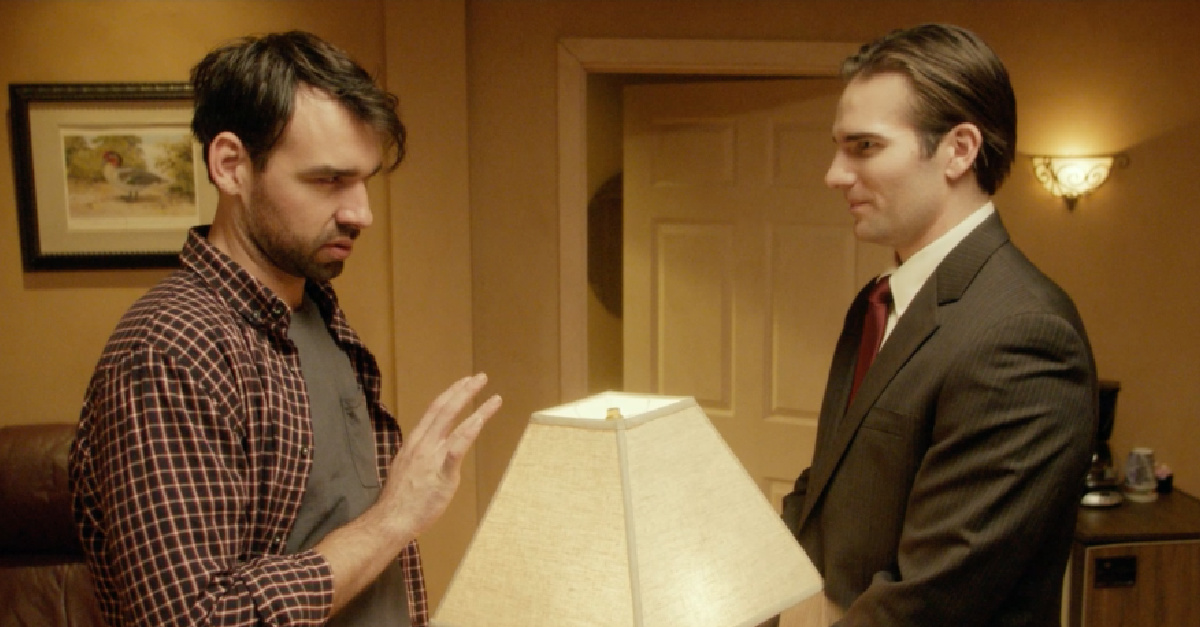 Gun and a Hotel Bible isn’t a Christian movie or even a faith-based movie — at least, not in the traditional sense. It’s also not for children. It includes adult themes of murder and infidelity (it’s discussed, and we briefly see two people on a bed, but clothes stay on). It has strong language (by Pete). If rated, it would be a soft “R” or a hard “PG-13.”

Still, it includes faith themes, and it represents Christianity well. Gideon displays God’s love, grace and mercy. He offers Pete a chance at redemption. He skillfully answers tough questions about the faith.

The skeptic, Pete, is represented well, too.

The two characters disagree, without being disagreeable — which was an important factor for Gosnell. In the real world, he said, shutting the other person down “can be the default option sometimes in really stressful conversations.”

Gosnell said he hopes the film will spark friendly discussions: “I think the coolest email that I could get would be someone saying, ‘I had a great conversation with someone else.’”

Gun and a Hotel Bible is unrated. It contains coarse language (including an f-word) and adult themes.

Family-friendly rating: 2 out of 5 stars