The Christmas Gift of Grace: You Won’t Find it in Your Stocking

The Christmas Gift of Grace: You Won’t Find it in Your Stocking

In the Christmas TV special Santa Claus is Comin’ to Town (Rankin and Bass, 1970), it’s not safe for the children of Somber Town to experience joy. They are not permitted to receive or play with the gift of a toy. Their sole purpose is to be “good” kids...gloomily completing tedious chores and observing the Burgermeister’s laws to avoid punishment.

Their routine sounds familiar to anyone who believes that Christians do good works to earn salvation and avoid punishment by being nice people (or at least not bad ones). From this unfortunate perspective, salvation is seen not as a gift from a loving God but as a loveless transaction, in which no amount of payment guarantees salvation.

The One Gift the World Needs

Dictionary definitions of “gift” refer to something given willingly to someone without expecting payment. Some origins refer to an “offering” or a “dowry”, both of which emerge during a search for the Hebrew word for gift: “mattan.” The Greek “charis” for “gift” literally means “grace” and “kindness.”

On Christmas, we celebrate that God the Father sent Jesus Christ, His Son, as a sin offering. He provided the bride’s dowry (we are the bride) so that we might be wed to the bridegroom (Jesus) and enter the family of God. He does this in kindness by His grace. Grace is a gift.

In other words, no payment is expected, required, or possible. God covered all of the angles in and through one man: Immanuel.

If the Burgermeister of Somber Town had understood the free gift of grace, he might have offered the children an opportunity to freely obey their parents out of love instead of making chores a drudgery.

He took away the joy from serving, and nothing they did would ever be enough. They would always work...for a temporary sense of security, safety, and love. The parents of Somber Town were not free to give good gifts to their children either, such as time to be children; to play, explore, feel safe, and rest in the certainty of their worth.

Any mistake these children made would put an entire family at the risk of being thrown in a dungeon.

Jesus tells His disciples to “be like little children,” but the little children of the Burgermeister’s kingdom are far too afraid of what law-breaking will cost. That’s not the childlike ideal Jesus had in mind. His definition of “childlike” had to do with embracing weakness and demonstrating simple trust that their Father would love and protect them.

Legalism divorces obedience from our relationship with God. 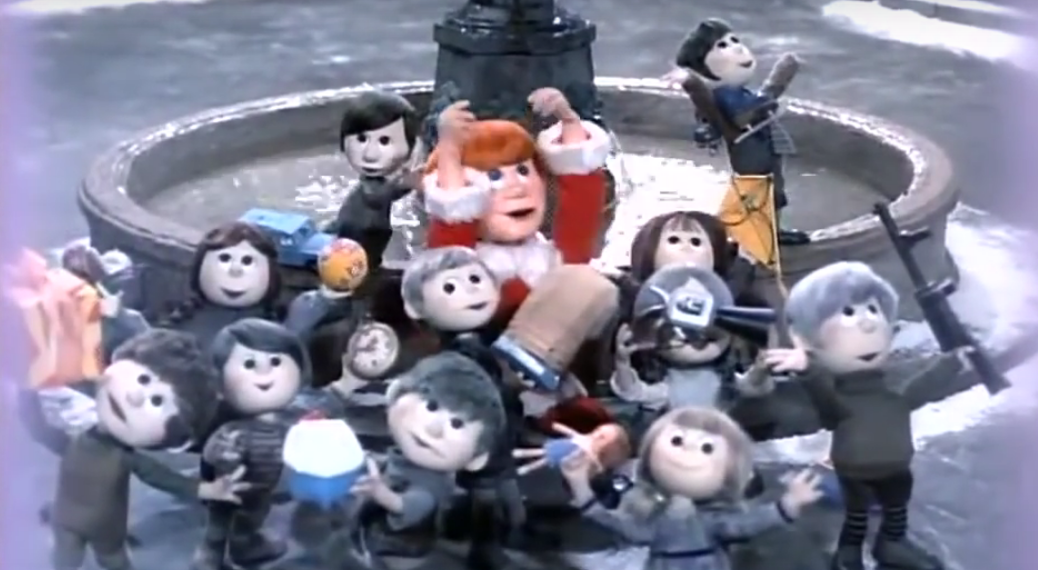 Meanwhile, Kris Kringle’s offerings in Santa Claus is Comin’ to Town were alluring. Tempting the kids of Somber Town to break the Burgermeister’s rules was easy. They were captivated by joy and love, and the prospect of a “free gift.” Although it wasn’t free.

The children were expected to sit on Kris’s lap and give him a kiss. “Don’t be stingy, be prepared to pay!” sung the outlaw. He invited the kids into a transaction. “If you sit on my lap today, a kiss a toy is the price you’ll pay.”

The Burgermeister’s law was out in the open. The message of Kris Kringle’s law was insidious: there will always be some kind of payment expected in exchange for love; there is no such thing as a free gift.

He goes on to say in his song: “if you get a little love, give a little love back.” Sure, it’s nice to imagine that a gift of love will yield a response in kind, but giving love with the expectation of a return is not the same as giving a gift.

How often do we refuse this free gift, thinking there must be a catch? Or treat the gift as though it is, in fact, part of a clever con which will always leave us on a hamster wheel trying to pay back what we owe? That’s the world speaking to us, and the world expects relationships to be transactional, not selfless.

Even Christians who understand that they cannot repay Christ’s gift often imagine a dutiful Messiah sighing as He gives His life against His will. “No one takes it from me, but I lay it down of my own accord,” Christ assured His disciples in John 10:18. He gave His life willingly and lovingly.

A World of Lies about Giving

Kris Kringle represented a worldly truth: even a positive transaction (love for love, a kiss for a toy) sets one up for the idea that nothing is free. In relationships, this is often damaging. A spouse believes lavishing presents on the other spouse will make that person stay, but it’s hard to enjoy gifts given out of fear in an attempt to control. Children submit to abuse committed by grown-ups in return for high marks at school, holidays, having a roof over their heads, avoiding punishment and so on.

These individuals come to disbelieve any form of honest, selfless love.

Ephesians 5:6 says “Let no one deceive you with empty words, for because of these things the wrath of God comes upon the sons of disobedience.” Christians are warned that deceivers are out there, in the name of Satan, preparing to devour us. Sure, Santa Claus is Comin’ to Town is just a bit of lighthearted fun, but this animated classic sends up red flags about the worldly definition of “gift.” 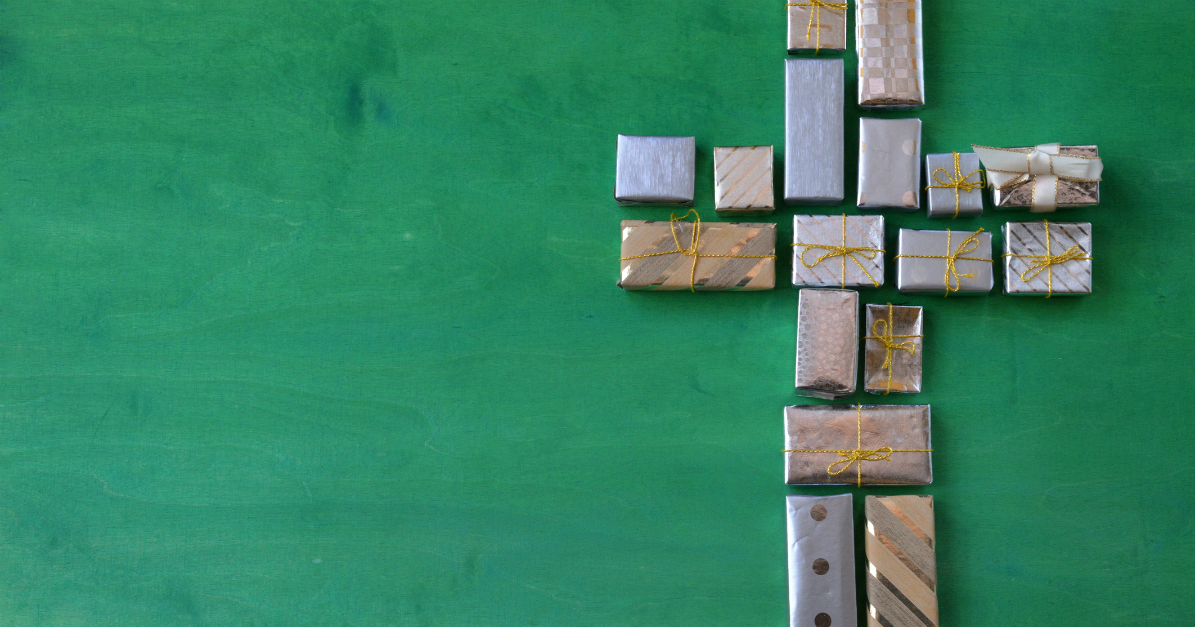 The Burgermeister had inherited the service of toymakers from a previous generation, one which was more in touch with the notion of childlike joy. This attitude gave way to an oppressive regime.

Would we want to remove the Burgermeister and replace him with Kris Kringle? Replacing one worldly ruler with another is sometimes better, but it’s never the ultimate answer to sin, which is our real problem. Christ did not overthrow the Roman Emperor and his officials 2,000 years ago to save only a single generation. He sacrificed Himself for the salvation of all believers from all parts of the world for all time.

Kris Kringle challenged authority and the tide eventually turned. The story, as told by Rankin and Bass, ends with a liberated Somber Town. However, this is short-term liberation from one style of oppression. The debt for their freedom would never be paid in full by Santa, meaning they hadn’t been freed after all.

Oppression or dissatisfaction emerge from deeply entrenched distortions of truth about Christ and our identity in Him. Only Christ’s redemption is the perfect gift. Only His version of liberation frees people from the idea that life resembles a ledger: do enough good stuff and not too much bad and you’ll go to heaven. Except, who creates the economy in a scenario like that? Who calculates moral equity or bankruptcy?

Mary’s life was not easy. Jesus, however, brought joy to the world, giving extravagantly of all He had without expecting clean stockings or kisses. His definition of “gift” was too vast for a stocking to hold it: an offering for the bride’s dowry, made possible by grace with no expectation of return, available to all who would receive it.

That’s a bit too wordy to embroider on a stocking. You can’t buy it online or put it together with instructions.

His was the costliest gift, yet the only one that comes without a catch.

Candice Lucey is a lover of Jesus and a writer living with her family in beautiful British Columbia, Canada.

Candice Lucey loves Christ and writing about His promises brings her much pleasure. She lives in the mountains of BC, Canada with her family.