The History and Meaning of the Christmas Tree

The History and Meaning of the Christmas Tree

“He came! He came!” My husband and I hold tight to the memory of our toddler discovering presents under the Christmas Tree. Presents aren’t the point of Christmas or the Christmas Tree, but the Greatest Gift is. Largely associated with the Christian celebration of Christmas, the traditionally adorned tree is now shared by many backgrounds of faith and holiday celebrations. In the Bible God compares himself to a tree:

“I am like an evergreen cypress; from me comes your fruit.” -Hosea 14:8b

The evergreen tree is a fitting representation of the long-withstanding love of God, and the gift of His Son born unto us. Angie Mosteller, celebratingholidays.com, writes: “Though there may be disagreement on when the tradition of Christmas trees first started, the case is certainly strong for both a German and a Christian origin. As might be expected, the popular carol 'O Christmas Tree' ('O Tannenbaum' in German) also had its beginning in Germany.” The history of the Christmas Tree is not something everyone agrees on, but here are many of the roots that water the age-old tradition. 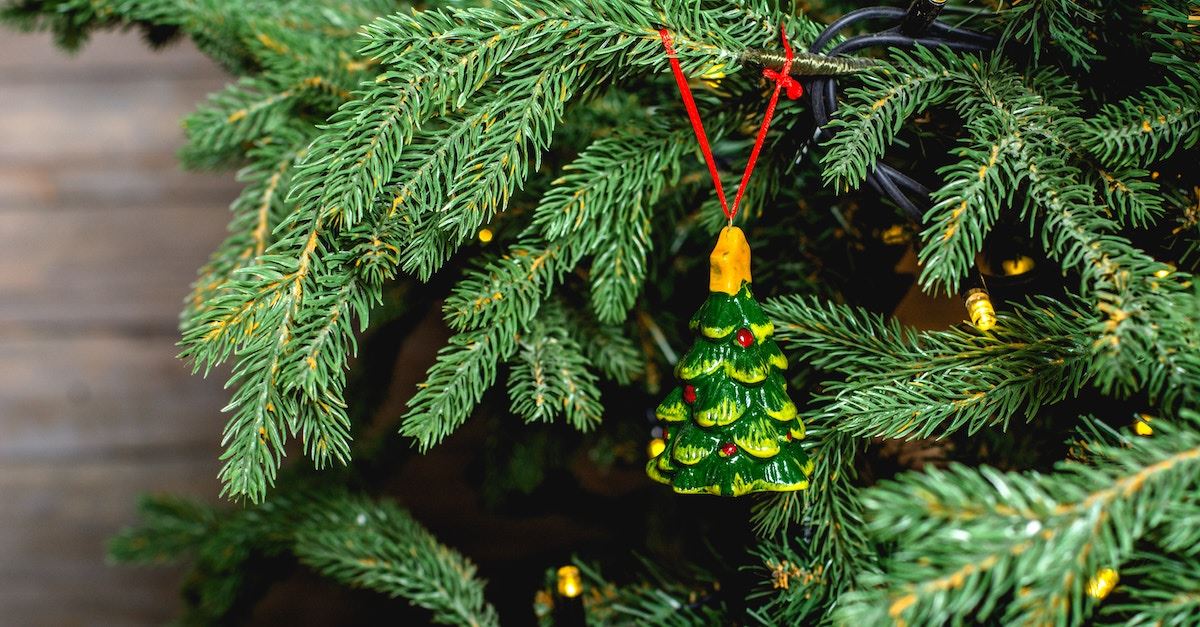 The Christmas Tree is an evergreen tree, usually decorated at Christmas with ornaments and lights. Not just any tree qualifies for this important holiday season status. Christmas trees are typically evergreen trees, often a pine or a fir. (britannica.com). Though, some people may prefer artificial for practical reasons or allergies.

The Latin meaning for evergreen is always green. “In temperate climates, evergreens can reinforce their own survival.” An evergreen doesn’t lose all of it’s ‘leaves’ at once, like the slow but inevitable pruning of the hard parts of our hearts by Christ over time.

“The real Christmas was nothing like the Christmas we’ve come to know, with its traditions, memories, and legends. It was a desperate moment that occurred for a desperate reason.” -Jon Bloom

What can we learn through the hotly debated origin of the Christmas tree? Throughout life, we will endure harsh seasons, but God will not allow us to be stripped of our leaves all at once. Even for Job, his loss came in waves, but God was bigger than it all. Christ is our survival in temperate climates. He is our reinforcement. There are many analogies to be made from the biblical mention of trees to our traditions. I believe if we seek Him with all of our hearts, He will reveal sweet notes of intention throughout our holiday season. 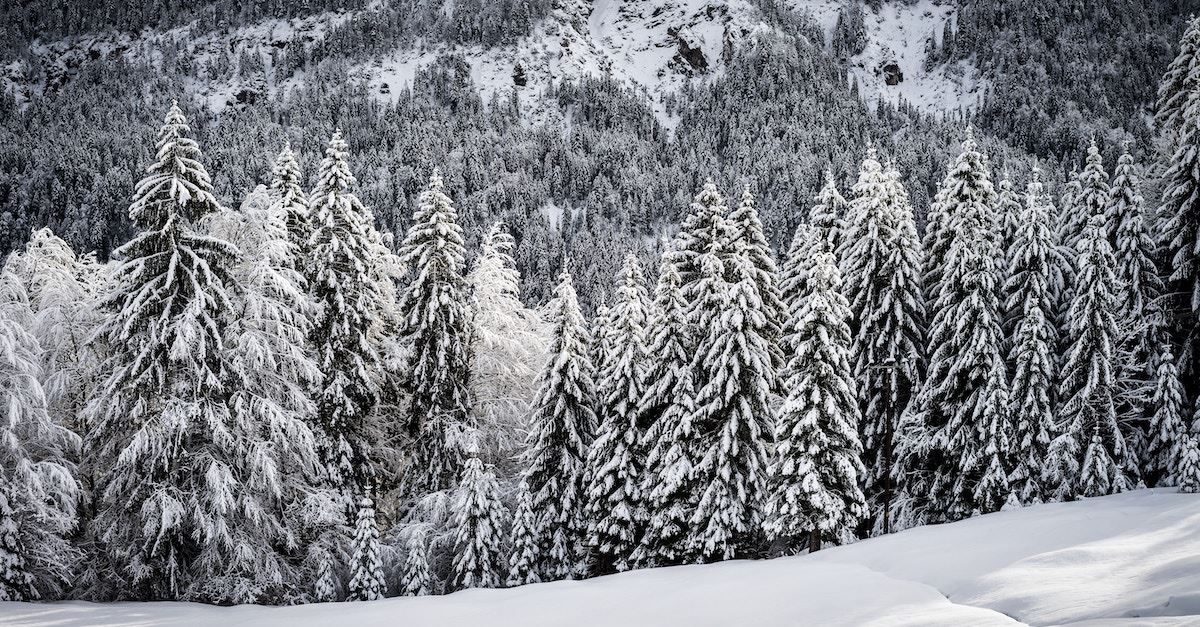 1. Evergreens Symbolized Eternal Life and Trees Were Decorated to Scare the Devil.

There were many pagan practices revolving around the evergreen tree, but none proved to be linked to the Christian tradition of the Christmas tree. “No one will disagree that pagans have long ‘worshipped and served created things rather than the Creator (Romans 1:25)’ …yes, even trees,” wrote Angie Mosteller of celebratingholidays.com. Trees were even worshipped in an attempt to keep the devil at bay. Jeremiah 10 addresses the idol worship of wood carvings as worthless and foolish (v8).

The story of St. Boniface takes place in the 8th century, and is often referred to as the “Felling of Thor’s Oak.” In some traditions, he is considered the pioneer of the Christmas Tree. The people of the town of Hesse (Hessia) worshipped the god, Thor, believing he took up residence in an oak tree. Boniface began to cut the oak down, and the wind took the tree to the ground, revealing an evergreen growing in its trunk. The evergreen came to signify Christ to the people, our mighty God who entered the world as a baby.

Yuletide (Yule time) was a pagan German festival associated with the folklore of the Wild Hunt, in which fairies, elves or the dead appeared in a supernatural group. Catastrophe or kidnapping to the fairy kingdom befell those that witnessed it. Yuletide eventually became a Christian tradition of Christmastide, the Christmas season. The Christmas tree and the nativity scene both became popular decorations of the season.

The Feast of Adam and Eve was celebrated in historical Western Germany on December 24th; “The main prop of a popular medieval play about Adam and Eve was a ‘paradise tree,’ a fir tree hung with apples, that represented the Garden of Eden.” Paradise Trees were placed in homes and decorated. The first Christmas ornaments were apples to signify the forbidden fruit, and wafers to represent the Christian sacrament of Communion. Over time different shapes were incorporated. Candles were often added to the paradise tree because they symbolize Christ, the light of the world. 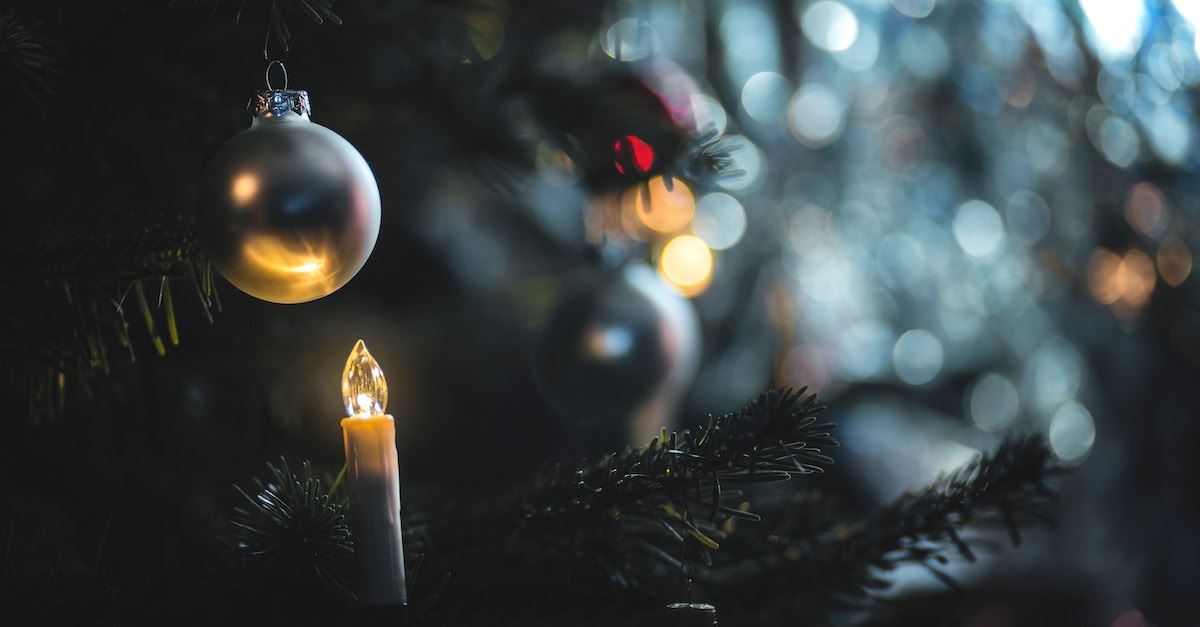 The first recorded Christmas tree can be found on the keystone sculpture of a private home in Alsace in 1576. German Protestants are often credited with the first circulation of the Christmas Tree, using them to decorate their houses. Protestant Christian reformer Martin Luther is said to have added the first lighted candles to an evergreen tree. The inspired decoration came out of admiration of the snow glistening from the trees on his walk home Christmas Eve.

Husband of Queen Victoria of England, Prince Albert launched the Christmas tree into a Victorian fashion statement. Anything that catches the royal eye often gains attention from the general public, and so the Christmas Tree tradition continued to blossom. Trees were decorated with toys and small gifts, candies, popcorn strings, and fancy cakes hung by ribbons and paper chains. The trees began to travel in this era! Trees were brought to North America via German settlers, Austria, Switzerland, Poland, the Netherlands, and to China and Japan by Western Missionaries.

3. The First Tree in America

Wooster, a small country town located in north-central Ohio, claims to have hosted the first Christmas Tree in America in 1847. German immigrant August Imgard might be the first to decorate the tree with candy canes; “Imgard cut a blue spruce tree from a woods outside town, had the Wooster village tinsmith construct a star, and placed the tree in his house, decorating it with paper ornaments, gilded nuts and kuchen.”

Windsor Locks, Connecticut also claims that a soldier put up a Christmas tree in 1777. Easton, Pennsylvania states the first American tree came via German settlers to their town in 1816; and Lancaster, Pennsylvania claims the same by the diary pages of a citizen that decorated with one in 1821. Boston and Williamsburg also lay claim to the official inauguration of the tradition in America.

Once the Christmas Tree had gained fashionable popularity, creative artists from Britain and the United States began to create and sell blown-glass and cast lead ornaments, tinsel, beads, pressed paper, electric string lights, and cotton batting. “In the United States, F.W. Woolworth was selling $25 million in ornaments annually by 1890.” Edward H. Johnson, vice president of the Edison Electric Light Company, electrically illuminated his tree in NYC in 1882, dubbing him the “Father of Electric Christmas Tree Lights.”

The boom of artificial Christmas trees came in the 1930s, and aluminum and plastic trees were a fad of the 1960s. Now countries, where evergreen trees could not grow or were not available, could join in the celebration, as well. The Christmas tree had traveled the world.

The media influences the spread of information, and the Christmas tree is no exception. The image began to pop up in newspapers, magazines, and in books. “O Christmas Tree,” a popular carol originating from Germany in 1824, began to be associated with the Christmas Tree tradition. O Tannenbaum means “fir tree” in German. One online encyclopedia claims, “the lyrics do not actually refer to Christmas, or describe a decorated Christmas tree . . . they refer to the fir’s evergreen quality as a symbol of constancy and faithfulness.”

“A Charlie Brown Christmas” first aired on TV in 1965. The still-popular Christmas special has had a huge impact on the Christmas Tree tradition over the years. Released in an era when aluminum trees were popular, it took a dig at them and brought the focus back—not only to the original evergreen—but the true meaning of Christmas.

Beyond mainstream media is the traditional "town Christmas tree" that many cities have put at the heart of their Christmas festivities, including the Rockefeller Center Christmas Tree in New York City, Galleries Lafayette in Paris, France, Rio De Janeiro, Brazil, and almost every major city and small town around the world. Washington DC celebrates the holidays with it’s annual Christmas Tree Lighting Ceremony. 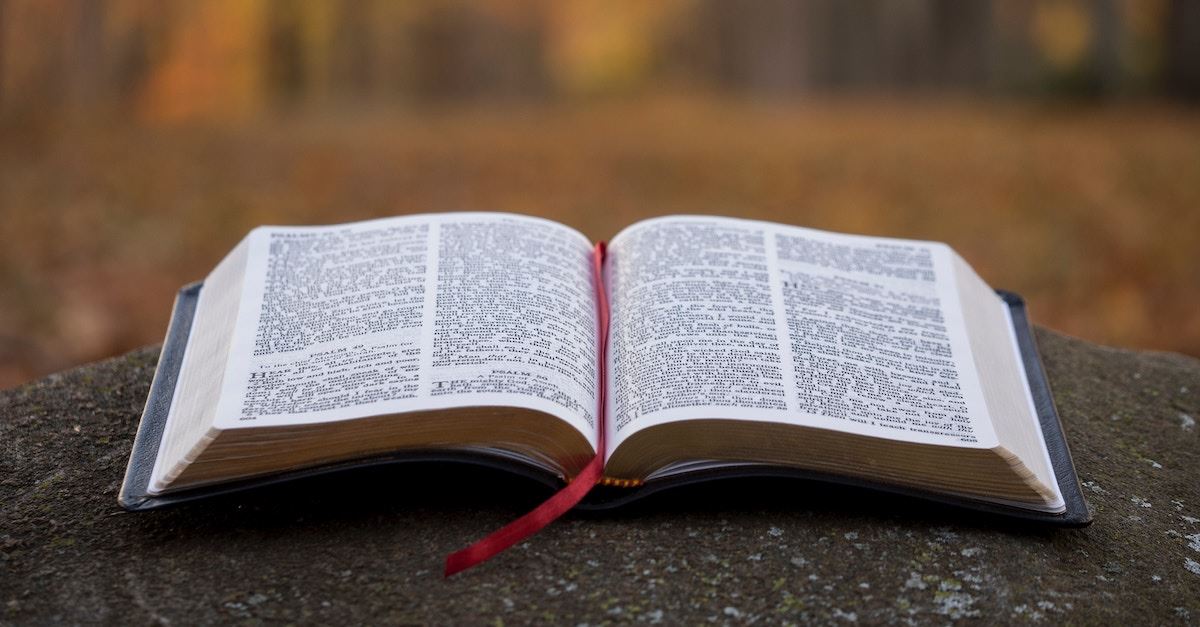 7 Verses Related to the Biblical Significance of Trees

For more verses on the biblical significance of trees, click here. 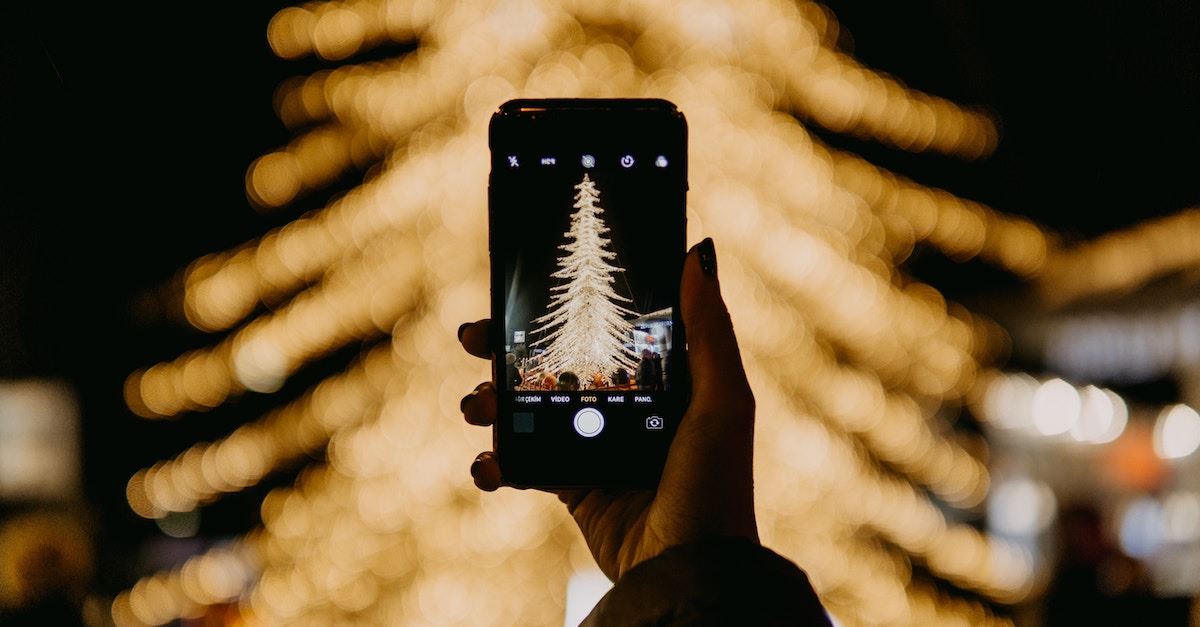 Whether fresh cut, potted, or artificial—indoors or outside—many families still decorate Christmas trees as part of their traditional Christmas celebration. Some move their trees outside in January to let the birds eat the popcorn and cranberries they’ve strung around it. God takes care of His creation. The leftovers from our holiday tradition are an abundant blessing atop the provision He’s already provided them.

The history and origin of the Christmas tree will continue to be debated and entertained over time, but the heart of the Christmas season remains. “When our traditions help our hearts to draw near to the living God, they are a tool functioning rightly. But when our traditions distract our hearts from the true purpose of Christmas — adoring Christ the Lord — then it is time to reevaluate and perhaps to repent.” -Kristan Tabb

Christ was born to carry the cross. As we celebrate the season, let’s remember to keep our traditions rooted in everlasting truth, singing brightly with His Love, and decorated fully with the good fruit He has brought forth from our lives.

Meg writes about everyday life within the love of Christ on her blog, https://sunnyand80.org.She is a stay-at-home mom, freelance writer, blogger, and author of “Friends with Everyone …Friendship Within the Love of Christ.” She resides in Northern Ohio with her husband of eleven years, two daughters, and their Golden-doodle.