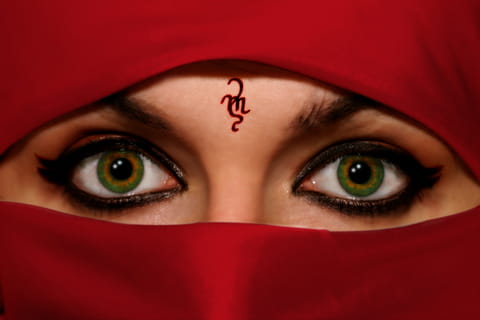 Jesus' great, great, great, great grannies were all REALLY bad girls (except for Mary, of course). Matthew mentions five women in the royal line of the Messiah: Tamar, Rahab, Ruth, Bathsheba and Mary. Why would the reformed tax collector include these loose ladies? Genealogies in Matthew’s day were boy’s clubs-men only were mentioned. Remarkably, the gospel writer thought these women of ill repute should be named-and honored as forerunners of the Messiah.

You can teach your daughters to be women of faith, even if they have “bad girl” tendencies. (They start young, you know!)

Tamar was accused of prostitution, and Rahab was a prostitute. Ruth and Rahab were both foreigners, a Moabitess and a Caananitess. Bathsheba, the famous home wrecker who turned the man after God’s own heart into a murderer, is also an honored ancestor. Even Mary, the virtuous mother of Jesus, lived with the slanderous stigma that she had become pregnant before marriage. Sounds like a steamy episode of Days of Our Lives, right? Why would these flawed floozies earn a coveted place in the Royal dynasty? God’s grace and favour is poured over these precious lives like holy anointing oil.

Let’s find out why Matthew mentioned them, and what we can learn about God’s redeeming love for us.

Tamar, the first “bad girl,” posed as a prostitute to seduce her father-in-law. Tamar’s titillating tale is told in Genesis 38. She was one unlucky bride. Judah’s son Er kicked the bucket and younger brother Onan was forced to take Tamar, his widow, as his wife. He shirked his duty by “spilling his seed” so that Hagar’s kid wouldn’t inherit his estate. God offed Onan for being a jerk. Poor Hagar. Judah had only one son left, and he was a kid. Judah hemmed and hawed about giving away his youngest son, and Tamar panicked.

“After many years, it was obvious that Judah wouldn't fulfill his promise, and Tamar's biological clock, as we call it, was ticking away. In those days, if you didn't have a husband or a son, you were helpless. In fact, the definition of a "widow" wasn't 'husbandless' but 'manless.' You weren't considered a real widow if you had a son to look after you. Tamar decided some drastic action was needed, so she dressed as a prostitute, fluttered her eyelashes at Judah over the top of her face veil, and she reeled in the line and extracted the pledge instead of payment. Prostitution wasn't illegal for men, but it was for a decent family girl. So when she was pregnant, they planned to burn the unfaithful slut until she produced Judah's staff and ring, and Judah crumpled in guilt.”

Judah married a Canaanite woman. His boys were only half-Israeli. Tamar was a Jewess. By God’s providence, this spunky lady actually preserved the pure family line. Tamar teaches that our greatest adversities can turn into God’s greatest blessings.

Have you taught your child to face adversity with faith? Has she learned that God sees her and will stand beside her?

Rahab, Salmon’s wife, was a seedy prostitute Gentile living in Jericho. Rahab’s narrative is found in Joshua 2 and 6. This lady who was shunned by her neighbors had a generous and brave heart. She welcomed and hid the Jewish spies who came to Jericho, protecting them from the king of Jericho when he hunted them down to assassinate them. Her confession of faith is found in Joshua 2:11, "the Lord your God is God in heaven above and on the earth below." Rahab, still called “prostitute” in Hebrews 11:31, was heralded as a heroine in Hebrew’s Hall of Faith! If you think about it, her single act of bravery caused the Jews to conquer Jericho, the geological “gate” into the Promised Land!

An anonymous ancient Christian writer commented: "Since Salmon was considered noble among the children of Israel and was of the tribe of Judah and the son of the prince, he saw the faithful Rahab thus converted to goodness and beloved by God, counted among the daughters of Israel. Such a wonderful woman surely deserved to become Salmon's wife."  This grandmother of Jesus shows us that God’s power transformed her pagan, sinful life into a female favored for her faith, and transformed by God’s power.

Have you taught your daughter to step out on faith even if there are risks involved? Has she learned to take a stand for Christ even when it’s unpopular?

Ruth, a penniless widow and a Moabitess, became the daughter-in-law of Rahab. But Ruth came from the wrong side of the tracks. The gods of Moab, according to the Bible, were detestable. Chemosh demanded human sacrifice and sexual orgies. Ruth could easily have ended up spending her life as a temple prostitute. But even after the devastating loss of her husband and brother-in-law, the destitute widow reached out to her Jewish mother-in-law. She abandoned all that she knew to follow and old lady to a strange country and an even stranger religion. Ruth's remarkable story of faith and loyalty was amazing. She is one of the few women in the Bible who have a whole book named after her. Her vow to Naomi, the mother of her dead husband, has become a classic quote, often used in weddings to indicate the bride's and/or groom's intentions of loyalty. "Where you go I will go, and where you stay I will stay. Your people will be my people and your God my God" (Ruth 1:16).

Ruth's loyalty was rewarded and she became the wife of Boaz, who belonged to the family of her mother-in-law. In the tradition of Rahab, Ruth became a part of the lineage of Jesus because of her pilgrimage to faith.

Have you taught your daughter to be loyal, committed? Has she learned to listen to your advice, as Ruth listened to Naomi?

Fourth on the list is Bathsheba (Matt1:6), found in 2 Samuel 11. Although she is presented as “Uriah’s wife,” her story is far from unknown. Her story is one of betrayal, adultery and murder. While married, she committed adultery with King David and got pregnant. As a result, David had her husband knocked off, and God punished them. The family of David never recovered. Nathan proclaimed that the sword would never leave his house because of his infidelity and murder. In Bathsheba’s defense, a person subordinate to the King (even as a queen) she could not have refused a direct summons by the King. Failure to comply may have resulted in imprisonment or banishment. It is unlikely that David would have done this, but it would have been within his rights as monarch.

Perhaps Bathsheba took the easy way out. Why did she leave the bathroom blinds open in the first place? So many questions…Could she have told Uriah? History is unclear. But God killed the baby of their unlawful union. God in His amazing kindness gave David and Bathsheba a son, the wise King Solomon. At David’s death, Bathsheba stepped in and assured her son’s succession over Adonijah.

Has your daughter learned the power of forgiveness? Has she learned that her faith is built on grace? Does she know how to impart grace to others, to believe the best in people?

I believe God loves bad girls. That’s why Matthew honors them. When Matthew came to write his genealogies, he added a few women-women who were respected for what they had done, but tainted as well. They were tainted by their birth outside of Israel, by their former behaviours or professions.

But a single step toward God, a brave faith-opportunity seized forever, changed the course of their lives.

God doesn’t care where we came from, or about our past mistakes. He offers forgiveness and hope. He doesn’t care what we were, but who we become and what He makes us.