4 Things Parents Should Know about Frozen 2

4 Things Parents Should Know about Frozen 2

Elsa is a courageous and compassionate queen who always has been a little different.

As a child, she could create snow and ice with a flick of the wrist. Her powers led to a few accidents along the way, but eventually, she learned to control her magical abilities, and especially after she was coronated as the queen of Arendelle. Love – she learned – is the secret to keeping her powers in check.

Still, Elsa has always wondered: Why was she born with magical powers?

And now, Elsa is hearing a female’s voice singing from the enchanted forest to the north. It’s a siren’s voice that awakens her at night and troubles her throughout the day.

Perhaps it’s a voice crying out from her past. And maybe it holds the answer as to why she is so different not only from her sister, Anna, but from everyone else, too.

It’s all part of the new Disney film Frozen 2 (PG), starring Idina Menzel (Glee, Ralph Breaks the Internet) as Elsa, Kristen Bell (Zootopia, The Good Place) as Anna, Josh Gad (Beauty and the Beast, 2017) as Olaf the snowman, and Jonathan Groff (Gless, The Conspirator) as Kristoff. All four were featured in the 2013 blockbuster and the film’s predecessor, Frozen. 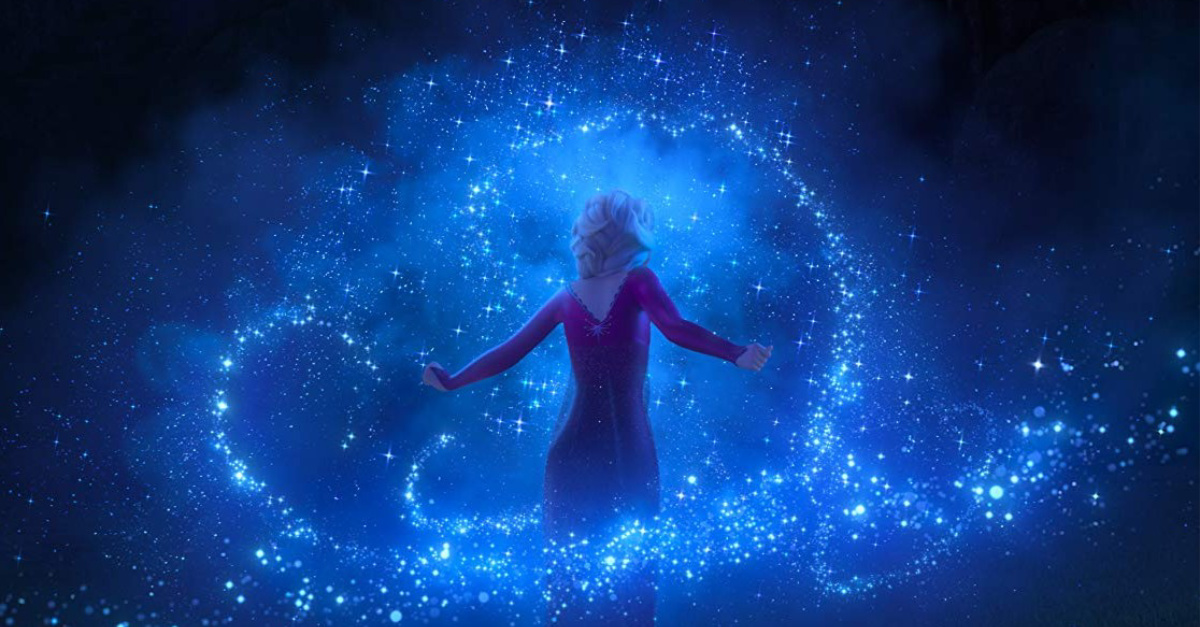 Frozen 2 is a little darker than the 2013 movie. It dives deep into the origins of Elsa’s magic. It also introduces animism – the belief that everything has a soul or spirit – into the plot. In the opening flashback scene, we see Elsa’s father telling her and Anna of an enchanted forest to the north that “was protected by the most powerful spirits of all – those of air, of fire, of water and earth.” But after a war, the forest was covered by a powerful mist and no longer allows anyone to enter.

Elsa begins hearing a siren call from the forest (it sounds like a woman singing). Unfortunately, though, she accidentally awakens these “magical spirits,” sparking a series of natural disasters in the kingdom. The citizens are forced to flee. Elsa, Anna, Olaf and Kristoff then trek toward the enchanted forest, hoping to reset the balance to the spirit world.

This animism theme is a major part of the plot. Water has a “memory.” The people of the forest say they “only trust” nature. We learn the spirits rewarded Arendelle with a “magical queen.” We also learn that a fifth spirit exists that could be the “bridge between the magic of nature” and the people of Arendelle.

The spirits, incidentally, have an earthly form. (For example, the fire spirit is a cute salamander and the water spirit is a horse.)

Christian families who watched Frozen, Coco and Moana – three films that also involved unbiblical worldviews – likely will enjoy Frozen 2. (Although the film’s animism may be worth a pre- or post-movie discussion.)

But if you skipped those other movies, then you might want to avoid this one. 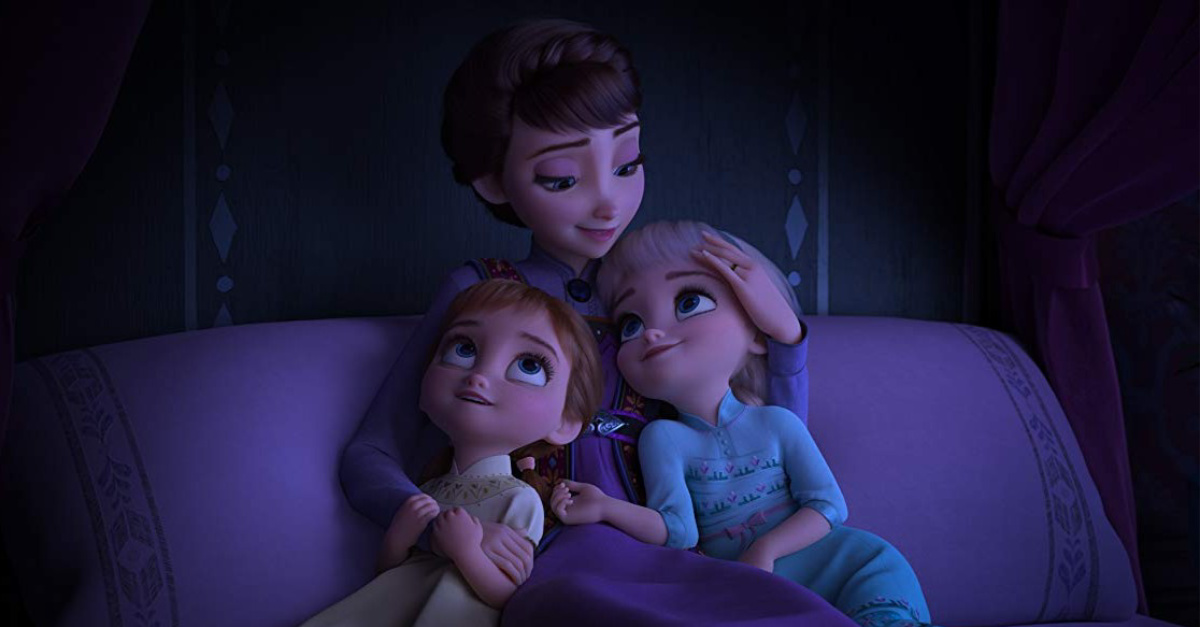 Sequels typically don’t equal their blockbuster predecessors. Frozen 2 falls into that pattern. The music is fun, but not as powerful. (The uber-talented Idina Menzel hits all the right notes in Into the Unknown, yet it’s not as enjoyable as Let It Go.) The plot is interesting, but far too complex for a children’s film. The story’s lack of an antagonist – there really isn’t one – makes it far different from most other children’s movies.

Thankfully, the film has plenty of enjoyable moments. Elsa, Anna, Kristoff and Olaf engage in a fun and hilarious game of charades. (Olaf shines in the contest, while Elsa, without her magical powers, struggles.) Kristoff tries proposing to Anna multiple times during the film, but each time is stopped by happenstance or his own poor choice of words. And while the music may not be a masterpiece, it’s still enjoyable and even inspiring. (By my count, there are seven major numbers.) 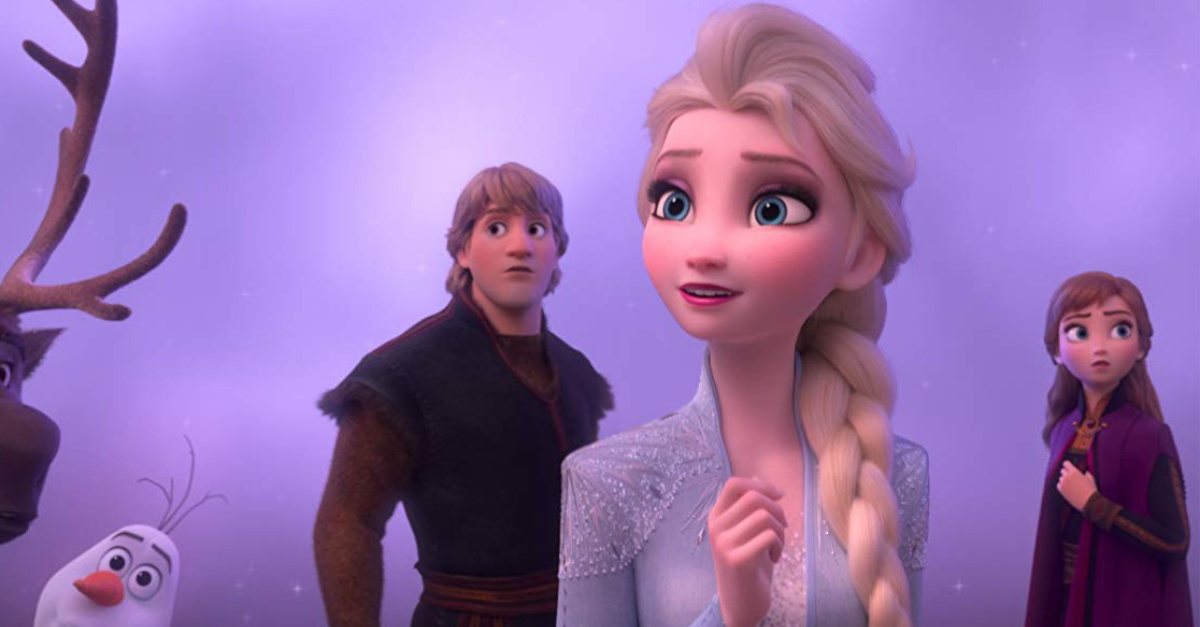 The Frozen movies, at their core, are stories about the friction and unconditional love between two sisters. Frozen 2continues that theme. Elsa would do anything to protect her sister. Anna, despite lacking magical powers, wants to keep her sister safe, too. They sacrifice for one another. They put their own lives on the line for one another. In other words, they show us what sibling love should look like in the real world.

“When will you start seeing yourself like I see you?” Anna asks her sister.

Sibling rivalry? They don’t know what that means. Perhaps the brothers and sisters in the audience could learn from their example.

In Frozen 2, we discover more about the love Elsa and Anna’s parents had for their children. We learn more about the romance between Kristoff and Anna. (It has a happy ending.) We also learn about a decades-old family misdeed that Anna wants to correct.

The film provides multiple lessons about life. How far would you go to protect your family? Do you ever demonstrate the sacrificial love for family members that Elsa and Anna have for one another?

It also offers a few thought-provoking questions: If you could uncover your family’s past secrets, would you? And do wrongs always need to be “righted” – even if the action took place long ago? 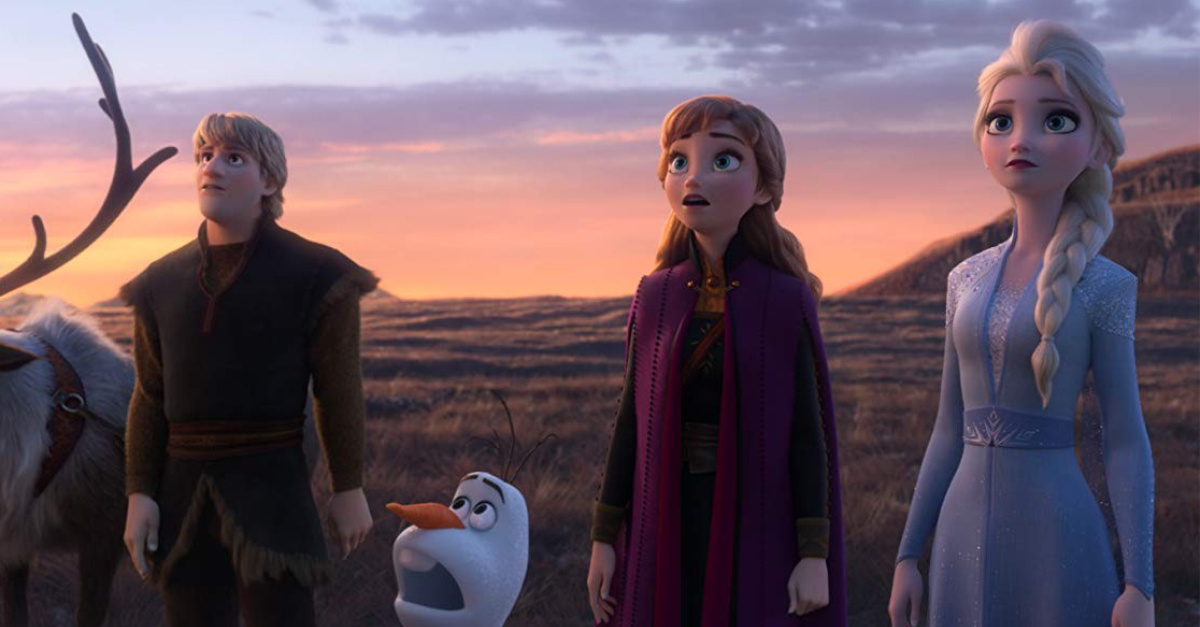 Frozen 2 has no coarse language. It contains no sexuality or sensuality (minus one or two kisses between Kristoff and Anna.)

But it does have a few disturbing and scary moments that might frighten sensitive and/or small children. Large ogre-like Earth Giants – bigger than the hills – roam through the forest at night. (No one is injured by them.) Later, we see the same Earth Giants asleep during the daytime, as Anna and Olaf canoe down a river and try not to awaken them. Elsa and the others become trapped in a forest fire caused by the fire spirit. (They escape.) Anna and Elsa are separated and long for one another. Finally, the movie implies that one major character dies. (That’s not the case.)

Still, its scary moments are no more frightening than those in Moana or Coco.

Frozen 2 is rated PG for action/peril and some thematic elements.