The Dark Knight Rises to the Occasion

The Dark Knight Rises to the Occasion 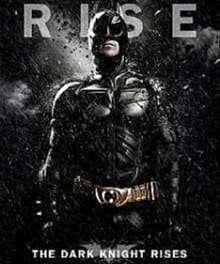 But with the mumbling, muzzled madman Bane (Tom Hardy, Inception), director Christopher Nolan has delivered just that in the final chapter of his Batman trilogy, The Dark Knight Rises. With a major axe to grind against Gotham and the well-to-do people who inhabit it, such as billionaire Bruce Wayne (Christian Bale, The Fighter), Bane may not be quite as fun to watch as the Joker, but he’s got some serious brute strength nonetheless.

Where the Joker and other Batman rogues deliciously prattled on, Bane is the sort of criminal who prefers to be seen rather than heard. Particularly challenged in the enunciation department, 90 percent of Hardy's lines register as barely intelligible. But don’t let the fact that you can’t understand him frustrate you. Nolan makes sure a picture is truly worth a thousand words, and you know in the first few minutes that things aren’t looking good for Gotham, let alone Batman.

Speaking of Bruce/Batman, he’s gone a bit "Howard Hughes" for the past eight years. Since the murder of Gotham’s pride and joy, supposed “white knight” Harvey Dent, was pinned on him, he has stopped shaving and bathing, hobbling around aimlessly with a cane. Naturally, trusty butler Alfred (Michael Caine, The Prestige) can’t bear to see him so miserable, so he encourages Bruce to embrace a normal civilian life and retire the rubber suit - not to mention that pesky sense of responsibility - for good. But since Bruce hasn’t gotten over the murder of his beloved Rachel, he doesn’t think any of that’s possible.

Back in Gotham City, local law enforcement is selling a message of peace to residents, but underground, there’s a decidedly sinister “Occupy Gotham” plot happening thanks to Bane and his equally impassioned cronies. Determined to level the playing field between the haves and have-nots and ultimately give the power back to the people, Bane’s first order of business is to fix the stock market, which has a pretty dramatic impact on Bruce Wayne.

Yes, believe it or not, the billionaire is now feeling the effects of the recession in a major way when his identity is stolen, bad trades are executed, and Wayne Enterprise’s funds are completely depleted. It’s here where you get a very clear sense of the contemporary social issues on Nolan’s mind as The Dark Knight Rises’ tone grows more ominous by the moment.

While never treading into downright preachy territory (thank goodness), Nolan gives the viewer some intriguing food for thought about the high price of greed in addition to the popcorn movie theatrics—a welcome turn of events in a summer when movies have felt even dumber than usual.

Also underscoring the theme of corporate responsibility (just one of many winks to recent headlines) is a professional cynic in a leather cat suit. Known as Selina Kyle by day and unofficially as Catwoman by night for her thieving ways, Anne Hathaway’s (Love & Other Drugs) performance is actually one of the movie’s best surprises. The reigning queen of the rom-com could’ve easily been out of her league alongside the likes of Bale, but she infuses their exchanges with plenty of sparkle as a whip-smart working girl. Warning Bruce “there’s a storm coming,” her words essentially prophesy the total destruction of Gotham unless a hero steps up.

To say much more about the storyline would rob you of the many joys of watching, so I’ll refrain from entering potential spoiler territory. In a nutshell, The Dark Knight Rises is a heavy but rewarding movie-going experience despite a couple of plotting missteps and clocking-in at about a half-hour too long. Anchored by solid performances, even cooler Bat gadgets than usual and a strong sense of mission, it’s one of those rare films that ends even more spectacularly than it began. Basically, if Nolan and his cohorts don’t get some Oscar love for this, they’ve been robbed.