Be warned: Goodbye Christopher Robin is not the Winnie-the-Pooh nostalgia trip you're expecting. In many ways it's more like a real bear than a stuffed one - cuddly to look at but get closer and find teeth and claws. So why the high score? Quality performances, unexpected conflicts, storybook scenery and life lessons abound. But also because this film knows what it means to have been both child and parent. 4.5 out of 5.

Like other luminaries of his time (J.R.R. Tolkien comes to mind), A.A. Milne (Domhnall Gleeson) returned from World War I a broken and searching man. A known playwright, he moves from London to Sussex longing to write something that will get humans to stop fighting humans. But his wife Daphne (Margot Robbie) informs him not so gently that "writing a book against war is like writing a book against Wednesdays." When events conspire that put both Daphne and young Christopher Robin's nanny Olive (Kelly Macdonald) - whom the lad calls "Nou" - out of the house at the same time, Milne is forced to spend time with his son (newcomer Will Tilston) and his stuffed toys, often taking walks in the woods. Connections are made and ideas take flight with the help of Milne's chum and illustrator Ernest Shepard (Stephen Campbell Moore). It all seems magical and wonderful from our perspective as lovers of Pooh and male bonding. But ours is not the only perspective to consider...

We open on shots so gorgeous of what we instinctively know are "The Hundred-Acre Wood" that we swoon a bit at the dappled light and the archetypal images coming to life in our minds. We might even expect, as one line in the movie states, to glimpse the door to Owl's house if we look "ever so carefully." But we learn quickly these woods are not as happy and carefree in the 1940s as they once were in the 1920s, and this early dichotomy established by director Simon Curtis (My Week with Marilyn) helps us properly frame the experience of Goodbye Christopher Robin. 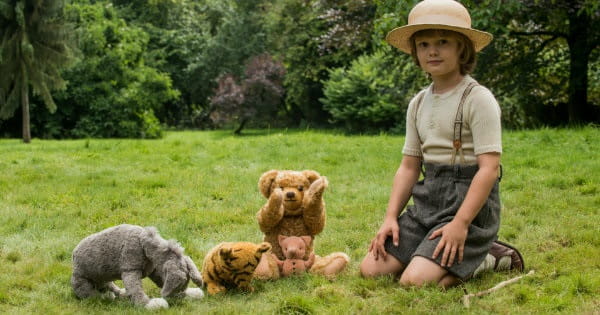 The casting is phenomenal. You'll swear young Mr. Tilston was born to play Billy Moon (the name that loved ones actually use for Christopher Robin Milne). Macdonald turns a supporting role into being the true star and authoritative voice of the film; just soak in the scene where she bursts into tears without a word from Milne, who shows up in her front yard. And of course there are the stuffed toys themselves, the scenes involving which are the ones pulling you to see this movie in the first place. They don't disappoint except that you'll be left wanting more. (And as an added bonus here in the year of It, Goodbye Christopher Robin redeems red balloons from the clutches of creepy clowns).

Maybe it's about too many things at once. Identity. PTSD. Fathers and sons. Storytelling. What's real and what isn't. War. Fame. Parenting failures. Regret. It's a lot to digest, and you'd be forgiven for thinking it tugs in too many directions with too many on-the-nose quotes ("If nothing changes the same thing will happen all over again." "If you don't think about a thing it ceases to exist" (this one said to be borrowed from Plato). "A person should do the things a person loves with the people a person loves." And so on). And yet, upon further review, these quotes, which mostly are spouted early in the film, are shown to be the stiff-upper-lip platitudes we must get past to make emotional progress in our lives and relationships. Sometimes, however, that progress doesn't get us all the way home out of the woods the way an audience might prefer.

Parenthood vs. Childhood. Adulting vs. Innocence. These circles work best - in life and in this movie - where they overlap, but by definition they also have exclusions, which can equal dysfunction and disillusionment, both for characters and audience.

God is mentioned a few times, and Christopher prays regularly alongside Olive, which becomes a major inspiration for Milne's poem Vespers. Milne talks about hoping for England to find "a sense of purpose" again, such as when slavery was abolished.

Other talking points include: Who are we, really? Are we defined by our name? Our nickname? Our family? Our relationships? Our beliefs? Our public persona? To whom does a story, or a work of art, belong once it's out in the world? And, appropriate to a film about a beloved British children's tale starring two veterans of the Harry Potter movies (Gleeson and Macdonald), this Dumbledore quote is extremely relevant: "Youth can not know how age thinks and feels, but old men are guilty if they forget what it is to be young."

Want More on the Depth of Themes in This Film? Read Our Feature Goodbye Christopher Robin Pierces to the Heart of What it Means to be Family

RECOMMENDED FOR: For starters, this PG movie is mostly free of objectionable content and contains just enough Pooh backstory and Easter eggs to satisfy fans. So there's that. There are also, to no one's surprise, tears to be cried, not all of which are happy ones, but they are cathartic nonetheless. Those who can adjust expectations on the fly and open their minds to unintended consequences in their favorite tales and even their own parenting will be the biggest fans of this film.

NOT RECOMMENDED FOR: Worst-case scenario is that Goodbye Christopher Robin could possibly alter one's affection for Winnie-the-Pooh stories. If you'd rather not risk that, despite the value of greater understanding, by all means stay home. It is also doubtful that this film will be the multi-generational, happily-shared event parents and grandparents might be expecting - your youngsters are likely to come away a bit confused, perhaps even bored in parts.

P.S. If, after seeing this film, you're in the mood for something similar (a movie about another creator of a story concerning a boy and his stuffed animal) but different (completely distinct structure (documentary) and tone (hope and shunning fame)), I highly recommend checking out the Calvin & Hobbes retrospective Dear Mr. Watterson.

Shawn McEvoy is the Managing Editor for Crosswalk.com and the co-host of ChristianMovieReviews.com & CrosswalkMovies.com's Video Movie Reviews.