Kirk Cameron (Unstoppable) and I agree about Christmas. It's a wonderful, celebratory time to be with family and appreciate the coming of the Savior, a time not worth wasting on worry, grouchiness, or fear of being infected with paganism. We're so much of the same heart on the subject I daresay we would enjoy fellowship beside a tree and before a glowing yule log while indulging his apparent addiction to hot chocolate (seriously, see if you can count how many times he gets giddy about the sweet, warm beverage).

What I'm not so certain about is Cameron's new film, Saving Christmas, in theaters for a two-week run this November. And my confusion begins with the poster and trailer for this film, which had me expecting something akin to a comical misadventure or glorified sitcom, something more like this past Mother's Day's Mom's Night Out, maybe. 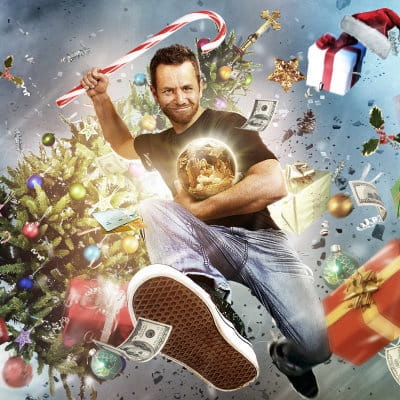 What we get instead is a pseudo-documentary hidden inside a loose narrative Christmas-party skeleton. There are four introductions, followed by a 3-point sermon in a parked car, proceeded by a 5-minute dance party, wrapped up with a conclusion that features phrases like, "stop terrorizing your family," "let's feast!" and an admonishment to serve only "the richest butter."

There's not much more to it than that, to the point where one wonders if a blog titled "Why I Love Christmas and Everything That Goes with It... and You Can Too" would have served Cameron's purposes better.

Because all Kirk Cameron and director Darren Doane (who also stars as the Charlie Brown to Cameron's Linus here) really want to do is let you know that Creative Storytelling and New Eyes are all that's needed for any follower of Christ to have a truly merry Christmas. That oversized tannenbaum in your neighbor's living room getting you down? Having a hard time seeing what a huge evergreen has to do with the Incarnation? Well, rest easy, Christian (hey! Wouldn't you know it, that's the name of Doane's grumpy character!), Uncle Kirk will tell you a tale of the Garden of Eden, the failure of Adam, and the cross of Christ to turn that frown upside-down!

And I say that with sincerity. If this film could be reduced to the parked-car conversations between Kirk and Christian which cover fresh ways of looking at snow-globed Nativity scenes, Christmas trees, and Santa Claus, it would - at least - be a tight little sermon with room enough for maybe another point or two. Instead?

Instead we open on a scene where Cameron, hot chocolate in hand and surrounded by the most Christmassed-out living room ever, tells us how much he loves everything to do with Christmas, but how there are two sides who don't. One side, we realize, is a vocal minority of secularists and Don't-Say-Merry-Christmas-ers. But this side is never discussed again. At all. So if you were expecting this to be the group Cameron will be "Saving Christmas" from, you may want to save your money.

From there we're left scratching our heads at an extremely unusual artistic choice - the beginning of a scene in which a deep-voiced, wild-haired man looks into the camera while a young girl in the doorway behind him informs him that someone has arrived at the local tavern. I won the prize among my audience for having guessed this scene would play in-full later in the film and be a reference to the real Santa Claus, Nicholas the Bishop of Myra. But others were left completely in the dark.

And only now do we come to the opening credits, which were actually one of my favorite parts of the film. They're animated, and they use subtlety to communicate how much disagreement we all have over all aspects of the Christmas story: did Mary ride the donkey or did she ride in a wagon behind it? Was Jesus born in a barn, or a cave? How many Wise Men were there, and were they present for the birth, or much later? Should any of this affect how we celebrate Jesus?

And now at last we arrive at a Christmas party being thrown by Cameron's sister (no, not Candace; his other sister, Bridgette Cameron Ridenour) both in real-life and in the movie. She's concerned because her husband Christian has withdrawn and seems very unexcited about Christmas. Leave it to brother Kirk to straighten him out (after jokingly offering, of course, to take him out back and roust him about).

And here is the aforementioned meat of the movie: Cameron finds Christian sitting alone in his van, and actually shuts up for a while to listen to the man pour out his dissatisfaction with the paganism, excess and materialism of the holiday. But Cameron's gentle approach doesn't last for long, as soon he's telling Christian how "wrong" he is, how he's giving a "slap in the face" to the true meaning of Christmas. And that may be my biggest issue with the film. While I already mentioned how much I agree with Cameron about the awesomeness of everything to do with Christmas, and while I'm all for creative storytelling and fresh perspective (even when that perspective comes via an embarrassing slow-motion belly flop to the floor beneath the Christmas tree), there's an uncomfortable degree to which the film won't allow for disagreement or dissatisfaction.

The culmination of that sense comes near the end when Cameron attempts to - at long last - touch on all the materialism that comes with the holiday. It may even be the worst example of too little/too late in recent cinematic memory, as he brushes any concern over the issue aside with one line about as long as we don't max out our credit cards, materialism is pretty okay because after all, our Eternal God took on a "material" body, so we mark our celebration with material goods. Did we really hear that correctly? Pause... rewind... yes, that's what he said. And it's a tremendous shame because while this isn't exactly It's a Wonderful Life or A Christmas Carol, most things Cameron says until this point at least resonate with hope and joy.

Except there's also that scene we come back to where Nicholas of Myra beats his rival Arius with a shepherd's crook (Nicholas was "'bad,' in a good way," Cameron tells us). Aaaand the awkward why-are-these-here scenes sprinkled in to give the token black party guest a chance to riff. And the Christian-came-to-his-senses dance party in which every extra in the film seems to have been promised 30 seconds to showcase his or her untrained moves. Yeah, there's no way around it, there are a lot of "yikes" moments in this 80-minute movie that attacks (even legitimate) Christian disappointment with Americanized Christmas and isn't all that likely to persuade anyone to change his or her mind. As with the prosperity gospel, much of what is presented about Christmas in this film doesn't quite work outside of the Northern hemisphere or the First World.

Why, then, have I found myself in a good mood since screening the film, even using a little bit of its teaching to help my daughter solve a dispute with a classmate over the "reality" of Santa? Probably because it has a good heart and is about one of my favorite subjects and holidays. Is that enough to recommend it, or suggest you should spend your money on a film that is neither likely to entertain you nor convince you of anything either way? No. While the effort must be applauded, one wonders what might have been without such an inbred production, where more objective direction, editing, and a solid "no, that's not a good idea" every once in a while could have been heeded for the better.