Better is the end of a thing than its beginning. - Ecclesiastes 7:8

Look at David's Lord and Master; consider His beginning. He was despised and rejected by men, a man of sorrows and acquainted with grief. Then look at the end! He sits at His Father's right hand, waiting until His enemies are made his footstool. "As he is so we are also in this world."1 You must bear the cross or you will never wear the crown; you must wade through the water or you will never walk the golden pavement.

Cheer up, then, poor Christian. "Better is the end of a thing than its beginning." View the creeping worm--how contemptible its appearance! It is the beginning of a thing. Mark that insect with gorgeous wings, playing in the sunbeams, sipping at the flowers, full of happiness and life--that is the worm's end. You are that caterpillar, wrapped up in the chrysalis of death; but when Christ appears, you will be like Him, for you will see Him as He is.

Be content to be like Him, a worm and no man, so that like Him you may be satisfied when you wake up in His likeness. The rough-looking diamond is put upon the wheel of the gem-smith. He cuts it on all sides. It loses much--much that seemed costly to itself. The king is crowned; the diadem is put upon the monarch's head accompanied by the trumpet's joyful sound. A glittering ray flashes from that coronet, and it beams from that same diamond that was so recently fashioned at the wheel.

You may venture to compare yourself to such a diamond, for you are one of God's people; and this is the time of the cutting process. Let faith and patience have their perfect work, for in the day when the crown is set upon the head of the King, eternal, immortal, invisible, one ray of glory shall stream from you. "They shall be mine, says the LORD of Hosts, in the day when I make up my treasured possession."2 "Better is the end of a thing than its beginning." 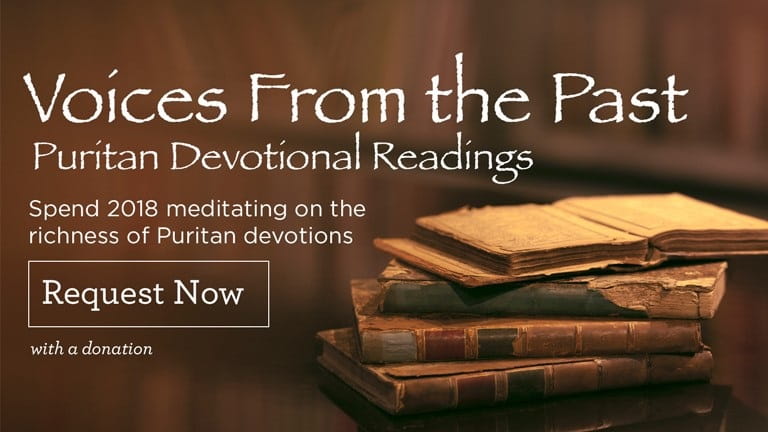 Voices From The Past – Puritan Devotional Readings

Over the past fifty years there has been a great resurgence of interest in the writings of the Puritans. The reading of their works has brought great benefit to the people of God in many lands. Christians from many different backgrounds and cultures owe a great debt of gratitude to those faithful pastors and preachers who continue to speak through their writings even though they have long since entered into their heavenly reward. The Puritans really knew how to teach and apply God’s Word in the Spirit’s power!

Richard Rushing has compiled this book of daily devotional readings from Puritan authors. At every turn these truths are eloquently taught, faithfully applied, and kindly offered as the subject of sweet spiritual meditation.