Ever Wonder Why God Had Such a Specific Design for His Tabernacle?

Ever Wonder Why God Had Such a Specific Design for His Tabernacle?

This is one of those verses in the Torah that does not seem particularly significant, but is actually one of the most significant. To understand why, let’s pose a question: Why doesn’t God stop speaking after verse 8? Why doesn’t He simply give an instruction, “Let them make Me a sanctuary that I may dwell among them,” and stop there? Wouldn’t there be great Israelite artists, designers, and architects who could have designed and built something beautiful?

Perhaps they could have. But there would have been two possible problems. First, leaving it completely up to the subjective tastes of some Israelites might well have led to the building of a Tabernacle that would be uninspiring— or, worse, looked just like a pagan house of worship. Or, it could have led to building something simply ugly —as much guideline-free, and God-free, architecture and art produced in the twentieth and twenty-first centuries do (see the discussion concerning art in the commandment against worshipping false gods—Exodus 20:3).

Second, as noted above, the Israelite elite could have kept some of the precious jewels they requisitioned for the Tabernacle for themselves.

The highest achievement of art is to elevate man. But that, of course, presumes there is something higher than man to elevate him to. And if that is true of art, it is particularly true regarding the place where people go to experience God. Therefore, God gives the instructions. The design of the Tabernacle is not left to men, no matter how artistically talented they may be.

Of course, God can’t give every artist in every generation instructions on how to build places of worship, let alone how to make art or compose music. But there is nevertheless an important lesson here about art and religion: Both need standards or they become useless and even destructive (for more on this topic, see the commentary to Exodus 20:2, the prohibition on worshipping false gods).

The Torah Provides Guidelines for Living

Regarding religion, the Torah provides guidelines on how to lead a religious life. While there is room for spontaneity in religion—prayer being an obvious example—such spontaneity must be within the context of the Torah’s ethical monotheism. In our time, many people believe they need no guidance on how to express religiosity or, as many put it, “spirituality.” They attempt to be religious without adhering to any religious standards or even just to biblical ethical monotheism. While it is certainly possible to be a Torah-based ethical monotheist without identifying with any religion, there is, nevertheless, much truth to what the twentieth-century American philosopher, George Santayana, said: “To attempt to be religious without practicing a specific religion is like trying to speak without speaking  a specific language.”

The great lesson of this verse is individuals and societies need ethical, moral, artistic, and religious standards that transcend them or there will be no more ethics, morality, art, or good religion.

Items for the Tabernacle

The Torah here lists the items to be built and placed in the Tabernacle. These items are listed in order from the most holy to the least holy, starting with the Ark. The Ark is the holiest object because it contains the Ten Commandments, which is the centerpiece of the Tabernacle (to this day, the holiest object in every synagogue is the ark [the aron kodesh] which contains Torah scrolls. And in many synagogues, the Ten Commandments are listed on the front of the ark).

What is a cubit?

A cubit is a standard biblical measurement. In ancient times, it was generally thought to be the distance between the tip of the middle finger and the elbow of a person of average height. The Hebrew word for cubit, amah, also means “forearm.” It is assumed to be about 18 to 21 inches (45 to 53 centimeters).

The Most Valuable for the Most Important

25.11 Overlay it with pure gold—overlay it inside and out—and make upon it a gold molding round about.

Gold is the most valuable and expensive metal, and thus it is used for the most important structure in the Tabernacle.

25.12 Cast four gold rings for it, to be attached to its four feet, two rings on one of its side walls and two on the other.

The structure of the Tabernacle is characterized by order and symmetry— reflecting order in the universe, which in turn reflects on God, the Creator of order.

Portability of the Ark

25.13 Make poles of acacia wood and overlay them with gold;

25.14 then insert the poles into the rings on the side walls of the ark, for carrying the ark.

25.15 The poles shall remain in the rings of the ark: they shall not be removed from it.

The Ark required poles so, like everything else in the Sanctuary, it could be portable. Unlike the Holy Temple, which was built hundreds of years later in Jerusalem and which was a large stationary structure, the Tabernacle was constructed in the desert, and had to be made in a way that allowed for the Israelites to take it with them throughout their forty-year journey.

Excerpted from The Rational Bible: Exodus

Dennis Prager's latest book, "The Rational Bible: Exodus" is published by Regnery. He is a nationally syndicated radio show host and creator of PragerUniversity.com. 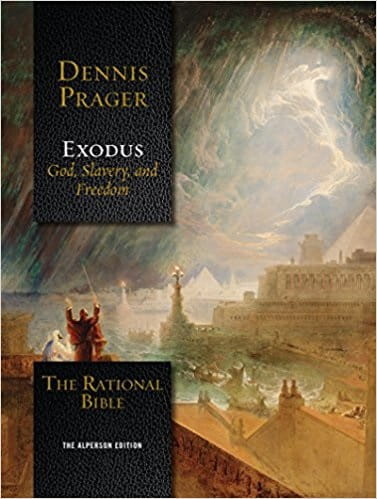 Why do so many people think the Bible, the most influential book in world history, is outdated? Why do our friends and neighbors – and sometimes we ourselves – dismiss the Bible as irrelevant, irrational, immoral, or all of these things? This explanation of the Book of Exodus, the second book of the Bible, will demonstrate that the Bible is not only powerfully relevant to today’s issues, but completely consistent with rational thought.

NEXT: Satan Wields Ignorance of the Word as a Weapon