Was the Promised Land Really Flowing with Milk and Honey?

Was the Promised Land Really Flowing with Milk and Honey?

My first introduction to the concept of “milk and honey” came from a VeggieTales song. For those who didn’t learn about the land of milk and honey from vegetables, or from Scripture reading, the Land of Milk and Honey is introduced to readers in the book of Joshua.

For some context, the Israelites had fled from 400+ years of slavery in Egypt and wandered the desert. Their stay in the wasteland extended when they complained, deliberately disobeyed God, and turned to other idols.

Nevertheless, God promises they will not stay in the desert forever. He will bring them out of Egypt, out of the wilderness, and into a land flowing with milk and honey (Exodus 3:8).

But why honey? And do we find mention of this land in other parts of the Bible?

In this article, we will dive into the nature of the Promised Land, why it’s important in the overarching story of the Bible, and whether the land was literally oozing milk and honey.

Where Does the Bible Mention the Land of Milk and Honey?

We do encounter mention of “milk and honey” in conjunction with the Promised Land in more than one book of the Bible.

Let’s dive into some of the specific verses where we find it mentioned. (A complete list can be found on Knowing Jesus.)

“So I have come down to deliver them from the power of the Egyptians, and to bring them up from that land to a good and spacious land, to a land flowing with milk and honey.”

“Hence I have said to you, ‘You are to possess their land, and I Myself will give it to you to possess it, a land flowing with milk and honey.’ I am the Lord your God, who has separated you from the peoples.”

“If the Lord is pleased with us, then He will bring us into this land and give it to us—a land which flows with milk and honey.”

What Is the Promised Land?

A land promised all the way back in Genesis to Abraham, the land of Canaan was reserved by God for his people for the nation of Israel to grow and thrive, with the exception that they uphold their end of the covenant and obey God. They often failed at this, which explains why they didn’t always stay in the Promised Land.

For those familiar with the story of Joshua and Jericho (Joshua 6), we know that when Israel finally finishes their forty years of wandering in the desert and they come to the Promised Land, they find another group of people has already taken hold of the city.

Scripture seems to assert this land stood out from the rest, explains Eliezer Schweid in his article. It has an abundance of resources, and as mentioned in the article above, the land had a touch of divine symbolism. Everyone from the land drank from rainwater. Rain tended to mean divine providence or favor.

But what does this have to do with milk and honey? Why does Scripture make mention of those two food items when talking about the Promised Land?

Why "Milk and Honey"?

Believe it or not, milk and honey isn’t just symbolic.

Archeological digs back in 2007 uncovered beehive colonies dating back to the 9th and 10th centuries BC in the Jericho area, writes Etgar Lefkovits for My Jerusalem Post. So when authors spoke of a land flowing with milk and honey, they did, in fact, mean it in a literal sense.

But did honey and milk symbolically represent something else?

We do know milk often has ties to fertility, so the milk could point to the abundance of the land. Honey tended to represent delight, joy, sweetness, and pleasure. This combination could imply that Israel would no longer experience a time of bitterness and barrenness when they entered the Promised Land. 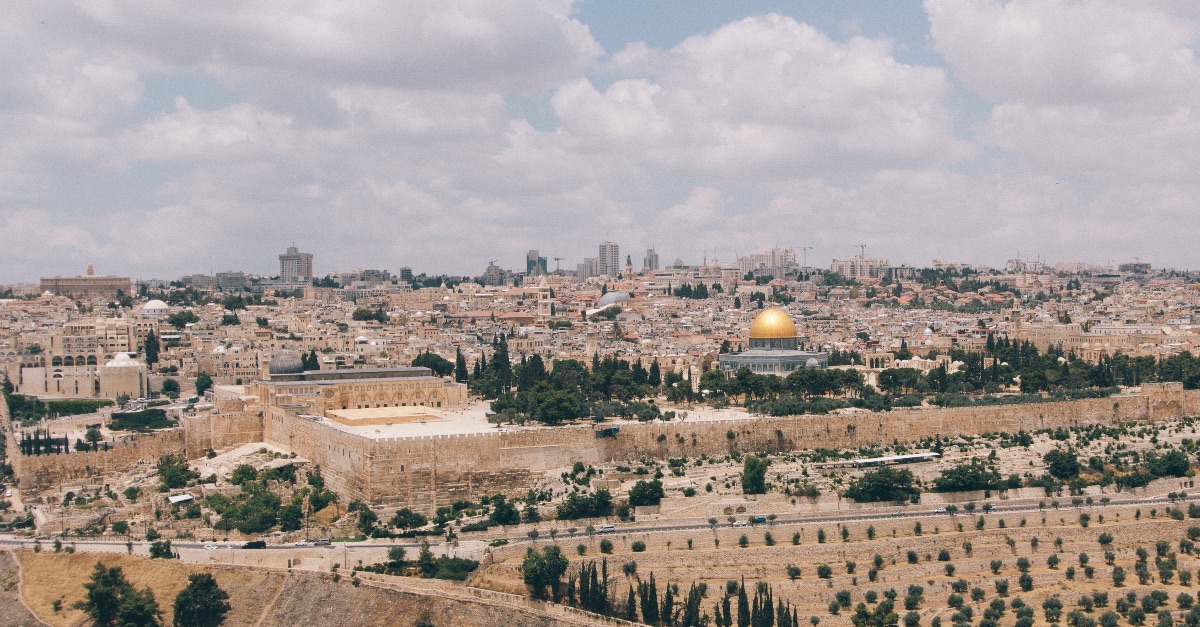 How Else Does the Bible Describe the Promised Land?

Do we know anything else about the Promised Land, other than its ability to overflow with milk and honey?

Joshua 1:13 describes the Promised Land as a place of rest. We know from maps that the promised land bordered large bodies of water and land. Aside from this, Scripture doesn’t dive too greatly into detail about the land, but we can infer from what we have been presented that it’s far better than any place they’d lived before. The Israelites would receive rest, abundance, and new life in this land.

That is, if they followed the caveat to obey God.

Did the Israelites Ever Reach the Promised Land?

As the story of Joshua goes, they do manage to reach the Promised Land and take over it, after marching around the city for several days. The Jericho walls collapsed at the sound of trumpets.

But we should note that they don’t always stay in the land.

From the Judges (past Joshua) through the Kings of Israel, we witness a constant cyclical process. The Israelites disobey God and turn to other idols, foreigners take over their land, they turn to God, and God appoints a ruler to bring them back to him.

Eventually, Israel (split into two) had strayed so far from the Lord that God allowed for the Assyrians and Babylonians to take them into captivity. They left the land for decades.

Nevertheless, you can visit Jericho today in modern-Israel. This land continues to be a popular tourist destination due to its historical significance.

We also see parallels between the old Promised Land and the new heaven and new earth promised to believers (Revelation 21). For now, we wander the wilderness, so to speak. But God has a land planned for us full of life, abundance, and who knows? Maybe even heavenly milk and honey.

Looking Forward to Our Own Promised Land

Because God had set apart the Israelite nation, he also had set apart a bountiful land for them to live and thrive. Owing to their disobedience, they did not always occupy this land, but when they did, they experienced the fullness of God’s blessings.

They ate both of literal and figurative milk and honey, and experienced God’s providence through the resources such as rainwater. In short, they had a land to look forward to. In Egypt, they likely remembered God’s promise to Abraham to make him into a great nation and to provide a place for that nation to grow.

We, as Christians, grafted into the family of God, also have a Promised Land to look forward to. As we wander in the wilderness, we can look forward to Jesus’ second coming when he will usher forth the new heaven and the new earth.

We can experience life everlasting in the land that we’ve waited for so long. Like the Israelites and Abraham, we are sojourners for the time being. But we know that we will not wander forever. And that we have a wonderful Promised Land to look forward to.

Hope Bolinger is a literary agent at C.Y.L.E. and a graduate of Taylor University's professional writing program. More than 600 of her works have been featured in various publications ranging from Writer's Digest to Keys for Kids. She has worked for various publishing companies, magazines, newspapers, and literary agencies and has edited the work of authors such as Jerry B. Jenkins and Michelle Medlock Adams. Her column "Hope's Hacks," tips and tricks to avoid writer's block, reaches 6,000+ readers weekly and is featured monthly on Cyle Young's blog. Her modern-day Daniel, Blaze, (Illuminate YA) Den (releasing July 2020), Dear Hero (releasing September 2020), and Dear Henchman (releasing 2021)  Find out more about her here.