What does Premillenialism mean?

The English theological term premillennialism comes from the Latin elements pre (before), mille (thousand), and annus (year). Premillennialism means that Jesus Christ will return to the earth “before the thousand years.”

There are hundreds of millennium references in the Old Testament that speak of the time of Israel’s end-time restoration to the land in blessing. However, it is not until John receives his revelation on the island of Patmos at the end of the New Testament era that the length of the Messiah’s earthly reign is specified.

In the early church, premillennialism was called chiliasm (from the Greek term chilioi meaning “one thousand” used six times in Revelation 20:2–7). Theologian Dr. Charles Ryrie cites essential features of premillennial view of Christ’s reign as follows: “Its duration will be 1,000 years; its location will be on this earth; its government will be theocratic with the personal presence of Christ reigning as King; and it will fulfill all the yet-unfulfilled promises about the earthly kingdom.”12

What is Dispensational Premillennialism?

Dispensational premillennialism (the majority premillennial view) holds that there will be a future, literal thousand year reign of Jesus Christ upon the earth following the events of the rapture, tribulation, and second coming.

There are several forms of premillennialism that differ as to how the rapture relates to the tribulation but all teach that the millennium is one thousand literal years and follows Christ’s second advent.

Premillennialism, or chiliasm as it was known in the early church, was the earliest of the three millennial systems to arise. Church historian Philip Schaff explains:

The most striking point in the eschatology of the ante-Nicene Age is the prominent chiliasm or millenarianism, that is the belief of a visible reign of Christ in glory on earth with the risen saints for a thousand years, before the general resurrection and judgment. It was indeed not the doctrine of the church embodied in any creed or form of devotion, but a widely current opinion of distinguished teachers.13

Premillennialism fell out of favor during the Middle Ages but was revived by the Puritans in the seventeenth century. It is the viewpoint of a majority of those who are conservative in their approach to biblical interpretation. 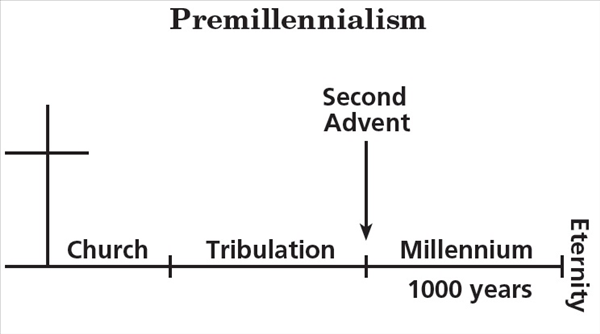 This article is part of our larger "End Times" Resource Library. Learn more about the rapture, the anti-christ, bible prophecy and the tribulation with articles that explain Biblical truths. You do not need to fear or worry about the future!