Help free two Pakistanis scheduled for execution for their faith!

A longing for strength is hardwired into the heart of every man. Starting in boyhood, we look for men who radiate that aura of strength, often men who exhibit athletic prowess or fighting ability. But at some point during manhood, we realize that there is more to strength than just the exterior.

Faced with a maze of questions about career, marriage, and life itself, we realize that we need more than a muscular body. We need a muscular soul.

A man needs confidence to overcome the anxieties that sabotage his dreams. He needs courage to face the fears that hamstring his interactions. He needs conviction to forge a path through the jungle of obstacles.

Where does a man get this kind of inner strength? How does he train himself to have a muscular soul? It happens in the last place most men look.

Finding the Way of Silence

During my years as a high school Bible teacher and coach, I discovered this first-hand. I taught a basic manhood class to sophomores and juniors where we explored a number of themes, especially the critical issue of strength. To bring the point home about inner strength, I wanted them to experience it rather than talk about it, so I came up with an idea.

During class, I would put them on a school bus and take them to a wooded area of a nearby park. I gave them a Bible, a couple of verses, and some simple instructions: Go find a place in the woods by yourself and spend fifteen  minutes in silence. When you hear the sound of the bus horn, come back.

It was a big risk. Think about releasing into the woods a bunch of young men (who had been cooped up in the classroom all day) with no supervision and few instructions. You can imagine your own horror stories. But none of them ever happened (except for one poor student who got lost!).

When we would gather back together, I would have them comment on the activity. I was always amazed at what I heard.

Some experienced a powerful inner peace amid the stresses of school life.

Some became aware of the sounds of nature as never before.

Some began attuning to their hearts, and still others felt the presence of God all around them.

Even years later, I still hear these former students comment about their experience of silence in the woods.

Something there marked them—something that built fortitude into their souls. Ironically, no one was talking to them or asking them to do anything. They were alone and still and quiet. They had entered the silence.

Men today live in a whirlwind of busyness, our souls choking on the constant harangue of noise. Our inner lives are enfeebled by the clutter of social media and enmeshed in the perpetual news headlines. Whatever outer strength a man may possess cannot overcome the weakness he feels in his interior self.

Imagine a sturdy house overrun with termites. You lean your weight on one of the well-crafted walls, only to find that it collapses on you. This is a good picture of so many men.

Here are four big payoffs for the man who chooses to enter silence each day:

This first one is the most obvious. Men live with increasing amounts of stress. I hear this all the time. More is expected of them at work in less time. They feel fragmented and exhausted.

But when a man enters the silence, he pushes all of that away.

He finds that his true center and identity is not tied to his job. He is so much more than what he may produce in the office or in the field.

He can let the pressures and pulls drop away, one by one. The noise and the clutter of the world start to fade away as well.

He can let himself rest and begin to focus on what is most important instead of what is temporal and fading.

He can let go of burdens that seemed unmanageable and worries that seemed unforgettable. As he waits in the silence, something comes over him subtly but surely.

It is the peace of a stilled soul. It is the quiet of a man at rest.

Men tend to live disconnected from their hearts. They are out of touch with their souls. It is a painful way to live, bisected so that the possibility of strength is always out of reach.

Men like this are forever running, posing, and scrambling. They are fearful of facing the chaos inside, so they keep moving.

But all the motion doesn’t make them stronger. It only leeches away any solidity that was there.

When a man chooses to enter silence, though, he becomes self-aware by definition. There is no outside stimulation, so all the submerged chaos surfaces. It can be terrifying at first, but this is the way into manhood. This is the way into the muscular soul.

When a man comes to terms with all that he is feeling and lacking, something else begins to happen in the silence.

One of the most pervasive truths in the Bible is that God is always there. And in the silence, we begin to taste the presence that burns us and empowers us. The burning happens as petty sins and sweeping addictions come before the light of His truth.

Our true strength is nourished in the presence of the Father’s love. And we find our hearts uniting to Him, as His desires become more our own desire. But the silence takes us into the empowerment as well. He promises to be with us not only in the silence but also in the day-to-day jostling and sparring.

Here is where we find the inner muscle to do what is right, to speak what is truth, and to love what is real.

This last point may be hard to swallow, but I believe it is so. When a man finds his true center in God’s presence, when he is comfortable in the silence, he is no longer looking for others to prop him up.

He is no longer a bent-over man, begging for validation from others.

He can stand straight and tall and offer what he has to those around him.

This is what heroic men do in the great stories. They give themselves away for the benefit of others. They willingly sacrifice so that others may flourish. The strength to live this way is not just the stuff of myths and movies. It can become the fabric of any man’s life.

There are no qualifications or preconditions, except one. He must continue to enter silence and let the Father love him, let the Son guide him, and let the Spirit empower him.

So how do you begin to enter silence? Start small with ten to fifteen minutes each day. Try to stay regular for thirty  days so that it becomes a habit. Ask God to meet you. Use a devotional guide or daily Bible reading, and then be honest and tell Him what’s on your heart.

Next, stop and listen. He might just have something to say to you. After all, He has known you all your life!

It will be the journey that changes you forever and takes you into the very heart of God. 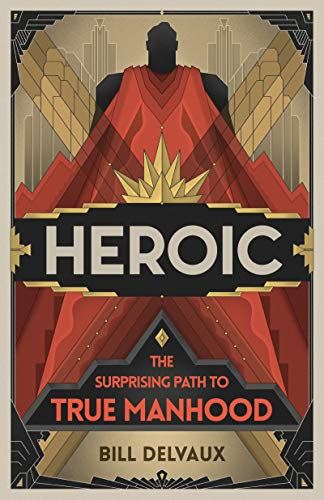 Bill Delvaux is a graduate of Duke University and Trinity Evangelical Divinity School. He has been a church planter, a high school Bible teacher, and a running coach. Six years ago, he pioneered Landmark Journey Ministries to help men connect their stories to God’s story through retreats and spiritual direction. His greatest claim to fame is being married to Heidi for thirty-two years and having two amazing daughters, Abigail and Rachel. He and his wife currently reside in Franklin, TN.

Look for Bill’s latest book, Heroic: The Surprising Path to True Manhood, on LifeWay.com, Amazon, or anywhere books are sold.

NEXT: 9 Ways Men Can Support Christian Brothers through Divorce