My Dad used to tell me, “You can do anything, Kathy. Really, anything.” I know that he meant for it to be empowering but at the same time it was paralyzing. Because what Dad really meant for me to do was something worthwhile. Something that would leave the world a better place. Something to say that it mattered that I was. But most importantly, something that I was called to do.

That felt weighty, too. What was I called to do? My sister had been called into the ministry and so, while I believed in her call, I didn’t believe in my own. I thought calls were only for people like my sister, pulled to lead in worship. Professionally, I was a graphic designer and a mom of four so the small good I did in the world was volunteer in a soup kitchen. Helping the homeless by serving soup each month felt like I was leaving the world a better place until one day when I was made to realize it wasn’t enough. A formerly homeless man named Denver Moore, co-author of Same Kind of Different as Me, challenged me to do more. He wanted me to “build beds.”

"I know that impossible, improbable happened because it was in my weave."

While it seems crazy that a mom and a graphic designer would somehow take this on, building beds for homeless people, I did. Ten years ago, I quit my job to figure out how to house people experiencing homelessness and since then, over five hundred men and women have been housed from the program we started. I know that impossible, improbable happened because it was in my weave. Denver pulled on my holy thread that had been waiting almost forty-five years for me to begin. And by pulling on my sacred weave, I was able to tie together with others who were woven into this same story.

"I believe we are all called to abundant and purposeful living."

I no longer believe that a call is exclusively for those who lead in ministry. I believe we are all called to abundant and purposeful living. I believe those calls are tied to what was woven in the womb and that if you haven’t connected to yours, it is patiently waiting for you to discover it.

It is said that the two greatest days in our life are the day we are born and the day we understand why. Have you found your why? You are never too young or too old to begin being who you were meant to be. But you have to begin.

1. Believe in something bigger than yourself.

The first step towards a more purposeful life is believing in something bigger than yourself.  I used to tell my daughters not to “navel-gaze” meaning thinking so much about themselves that all they can see is their own belly button. Life begins when we get out of our own heads and into the world. That looks different for everyone.

I started by believing in the act of service and working in the soup kitchen. Believe me, it is difficult to think you have too many problems when you have spent the day helping people who have truly lost everything. And even then, I would be amazed by the people I was serving who had a deep, abiding, unshakeable faith who would be able to look outside themselves and tell me to “have a blessed day.”

When we are searching for purpose, I do believe the next best step is to start listening. Really listening. That small quiet voice that is telling you to do something a little crazy, a little out of your box? Try saying yes.

It could be to talk with someone you think you have nothing in common with or to help with a cause you have long been passionate about yet have never made time to really do anything about. These small, quiet, inner nudges are the truest voices in our loud world. I think they are always pointing us to our true north, our true purpose.

So, the next time you hear a little inner voice telling you to act, say yes. Trust the Whisper. Whatever it is. Whatever you feel is quietly, persistently, relentlessly calling to you. No matter how crazy or inconvenient it might be to listen. It is the beginning of what is calling you.

Once you hear it, that whisper? Know that there will be more. Once you start listening and connecting what I call the God dots, you will notice they are all around you. And you may even begin to see or feel something you are meant to do. If it seems big, crazy big like housing homeless people, how do you start? You take the first step. Literally, you start by walking.

"But you have to take the first step..."

In 2016, I walked 100 miles of what is called the Camino in Spain. It is a 500-mile ancient pilgrimage that thousands of people from all over the world walk. Poet Anthony Machado wrote about the walk in his poem Cantares:

Translated to English this means:

Walker there is no way,
The path is made by walking.

4. Be a blessing—large or small.

Some were born for big buildings, some to cure cancer or even world peace. Some others maybe a series of kindnesses and seemingly small acts that have big consequences. Each are important, Each necessary in our world. Don’t miss out on yours. Don’t miss out on knowing why you were born.

Service has a life of its own. A single act of kindness may have a long trajectory and touch those we will never meet or see. Something that we causally offer may move through a web of connection far beyond ourselves to have effects that we may have never imagined. And so each of us may have left far more behind us than we may ever know.

Start yours now. Start today. From random acts of kindness to acts that will make history. Go live your weave. 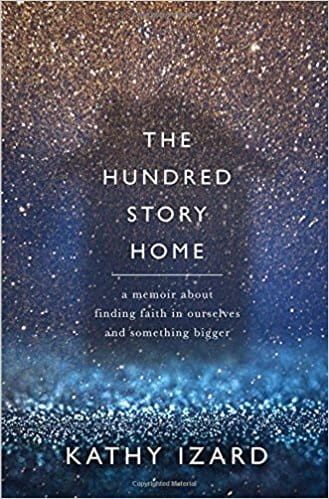 Kathy Izard is a community advocate, writer, speaker and author of The Hundred Story Home: A memoir of finding faith in ourselves and something bigger. She believes in crazy big dreams, listening to whispers and finding out who we were meant to be. www.kathyizard.com

NEXT: How to Lay Aside the Weight of Lust