Worry, stress and anxiety are the diagnoses of the day in American culture, even among Christians. Is there a cure?

Beloved pastor and author Max Lucado sees, via his giftedness in plumbing the depths of Scripture, if not a cure, at least a healing balm. And it's hiding right in plain sight, right among Paul's oft-quoted directive to "be anxious for nothing" (Philippians 4:6).

"For nothing?" we ask. Sometimes things get so unbearable this bit of well-meaning encouragement can feel like a slap to the face, similar to that other favorite, "in everything give thanks" (everything?). So we sat down with Max to discuss what he found that brought him to write on the frustrating, confusing, pressing issue of anxiety, borrowing his title straight from Paul: Anxious for Nothing: Finding Calm in a Chaotic World.

Crosswalk: Max, if we Christians believe and know that Jesus is our Prince of Peace, and that he brings us a “peace that passes understanding,” why are we so prone to anxiety?

Max Lucado: Well, part of it is just this anxiety-driven world in which we live. It’s literally a place of chaos.

We cannot underestimate how unique this generation is in comparison with others. As people list the reasons anxiety is off the charts, psychologists and researchers always point to the fact that our world has changed more in the last 30 years than in the last 300 combined. It’s a faster world; nobody has ever been able to go as fast as you and I can in our cars, in our planes, and also in our communication. There’s hardly a place we can go where we’re not getting news, and oftentimes that news is not good news. And then most of all, it’s just a secular society in which we live in the United States. And secularism sucks the peace out of people because we don’t have a way of coping with the fears that come.

So there are many reasons that even Christians feel this anxiety. It’s a society that is really being infiltrated by thoughts of anxiety.

CW: Yes, you make the point in the book that we Americans would pretty much take the gold medal in anxiety. Why do you think citizens of countries with fewer possessions or more difficulties or more persecution are more tranquil, generally?

Lucado: Is that not the most interesting thing? And I’ve wrestled with that! One of the more interesting statistics I came across is that people in third-world countries are far more at peace – and battle lower levels of anxiety than we do – even though they have many fewer of the conveniences that we do. And when they come here, their anxiety level picks up, as if our anxiety is contagious.

I think there are two reasons for that: One, by and large, people in third-world countries are faithful people. They seem to be people of a deeper faith, maybe by necessity. And number two, their days and their lives are simpler, they are a reflection of the day my great-grandad must have had, when he could go no further than his horse could go on a given day. Whereas if opportunity presented itself, I could be on an airplane for 17 or 18 hours. So my days are far longer than theirs. I think in third-world countries there is more of a respect to Time, and their days shut down when the sun goes down. So, some real practical things have an influence on their [lower] anxiety level.

CW: Given just how many Americans are being diagnosed with anxiety, tell us a little about what you write regarding how to get C-A-L-M, calm.

Lucado: The book is built around the passage in Philippians 4 that the Apostle Paul wrote. And that gives birth to the title of the book when the Apostle Paul said, “be anxious for nothing.” When he writes, “be anxious for nothing,” by the way, he doesn't mean "never feel anxiety." The way that he constructed his Greek verb there is, "do not allow yourself to be perpetually anxious," don't allow yourself to slip into a mindset of perpetual anxiety. Anxiety is an option, but the Prison of Anxiety is not an option.

So basically the idea of the book is to help people have this as a tool with which to respond to the presence of anxiety. Again, anxiety's gonna come; anxiety will always knock at the door, but we don't have to invite anxiety in for dinner. We respond by Celebrating God, Asking God for help, Leaving the problem with him, and then Meditating on good things. 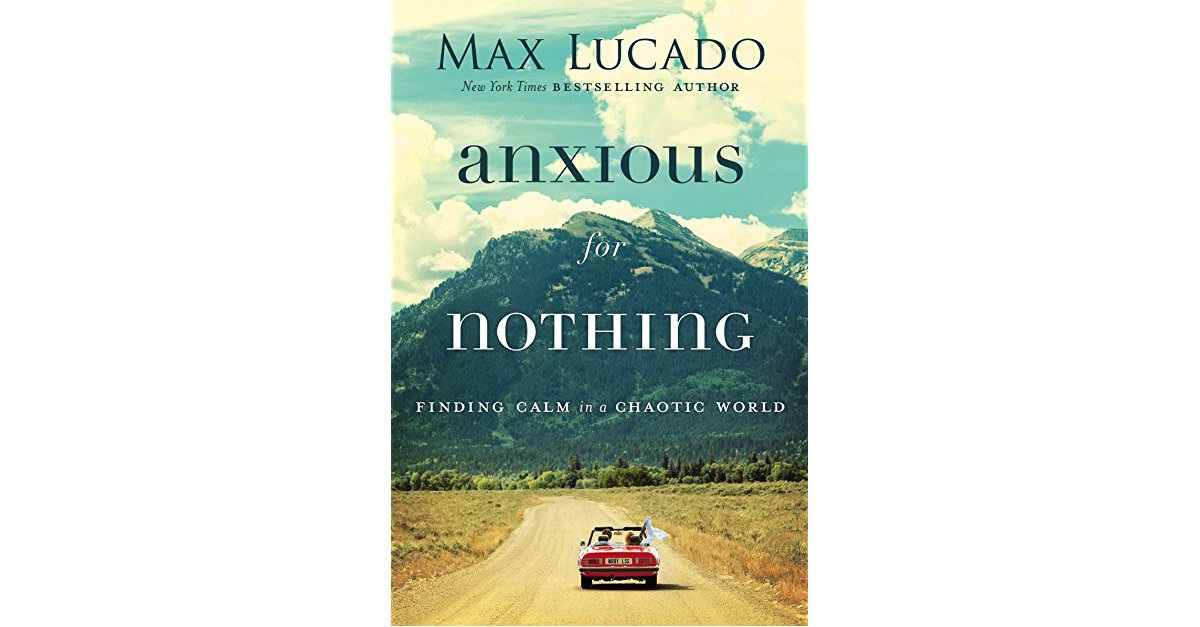 CW: So we know that anxiety will come, but if Paul tells us to be anxious in nothing, is it a sin, then, for a Christian to be anxious?

But anxiety’s an emotion. It’s an emotion like sadness, like guilt, like joy. And so the emotion in and of itself is not sinful. But if it’s not dealt with appropriately, it can cause us to make decisions that we will certainly regret.

CW: What role do you think prayer plays in soothing an anxious soul?

Lucado: Well prayer is huge! Prayer is huge because prayer is the first response of a Christian to anxiety. We come out of the worldview that celebrates God, right? We start with "rejoice in the Lord always." So that means, okay, I believe that there is a good God, and he oversees the affairs of mankind. I may not always understand what he does, I may not even agree with what he does, but I trust that there is a good God.

So if I believe that, then asking the Lord for help is the natural response of faith to anxiety. As the Apostle says, “Be anxious for nothing, but in everything, by prayer and petition, let your requests be made known to God.” So he gives us two options: one is anxiety, one is prayer. He says, “say no to the anxiety; don’t let yourself be weighed down, sucked into the quicksand of anxiety.” Instead, be quick to pray. Be quick to pray. Let your requests be made known to God. And he uses a word there that literally means “specific petitions.” I don’t want to overdo the word but it seems to me like he’s saying, “be very specific.” As if to say, “Lord, I’ve got a meeting at 2:00 today and my supervisor is hard on me. Would you please go specifically into that meeting, would you prepare the way?” And so we get specific in our requests, and this allows us to see how God specifically answers prayer.

Again, the power of prayer is not in the way we articulate the prayer, it’s in the one who hears the prayer. But as I get specific in my requests, I can see how God is specific in his answers.

CW: I love these books you do like 3:16 The Numbers of Hope where you really get deep into a well-trodden passage of Scripture and break it out into meaningful pieces that we might not have considered before. And one of the things that stuck out to me about the segment of Philippians 4 you examine here is verse 8: “Whatever is true… honorable… right… pure… lovely… of good repute… dwell on these things.” Because it seems like the only times I hear that verse quoted these days are as an injunction against people viewing certain forms of art. So please tell us a little about why it means so much more than that in context.

Lucado: Wow, thanks for asking that, because I really think the key to dealing with anxiety is understanding that we really can manage our thoughts. There might be a mindset among some people that says we’re the victims of our thoughts. But that’s not the teaching of Scripture. Why would Jesus say, “Don’t let your hearts be troubled” if it’s not possible to keep our hearts from being troubled? [Laughs]. You know? So he has given us the ability not of controlling our circumstances, but we have been given the ability of controlling the way we view and interpret our circumstances.

So the teaching of the Apostle strikes me as very logical. First we rejoice in the Lord, we acknowledge that he’s in control. We ask him for help. We leave our problem with him. Now that we’ve rejoiced in him, we’ve asked him for help, and we’ve left our problem with him, what do we do with all this available brain space that was taken up by anxiety? Well, the Apostle says, now you’ve got some spare brain cells that aren’t being used – fill ‘em with good stuff! Before the devil can bring more bad stuff!

And so we meditate on these good things. And we do that by worship, we do that by Scripture, we do that by watching good movies instead of violent movies… we do manage our thoughts. We learn to control what comes in and out of our brains. We take every thought captive. And as one of my friends always says, “Just ‘cause you have a thought you don’t have to think it.” [Laughs]. You know, just because something comes up in your head you don’t have to meditate on it. But we test everything against the teachings of Scripture, and we allow ourselves to have the mind of Christ, to begin to think more and more like him.

Anxious for Nothing: Finding Calm in a Chaotic World, by Max Lucado is available September 12, 2017, from Thomas Nelson.