Editor's Note: The following is a report on the practical applications of M. Tsering's new book, Jesus in a New Age, Dalai Lama World (Defending and Sharing Christ with Buddhists), (Interserve USA, 2007).

The Buddhist worldview is so vastly different from the Christian faith that even a basic concept like a loving God who interacts with people is foreign to Buddhists.  But it’s possible to reach out to Buddhists with Christ’s good news if you do so in ways they’ll understand and appreciate.

Here’s how you can share your faith with Buddhists:

* Build meaningful friendships. Invest the time and energy necessary to develop genuine friendships with Buddhists you know. Get to know them well. Let go of the time-pressured, task-oriented Western culture’s philosophy and seek to enjoy your time with Buddhists without hurrying or feeling as if you have to accomplish something while you’re together. Become a person who your Buddhist friends trust.

* Help with practical needs. Work either as an individual or with others in your church to help meet the needs of people in your local Buddhist community. Ask those in the community what they need and try to meet those needs, rather than simply offering something without first checking to see if it’s what they truly desire. Consider starting or supporting programs to help with childcare, job training, English language skills, or anything else that’s needed. Allow your Buddhist friends to help you, too, and express your appreciation to them.

* Invite them to celebrate a holiday with you. Include your Buddhist friends when you celebrate Christmas, Easter, Thanksgiving, or another holiday with a meal, party, or other special event. Use that experience to explain why the holiday is important to you and how it relates to your faith.

* Learn as much as you can about Buddhism before sharing Christianity. Educate yourself on at least the basics of what Buddhists believe – and why – before attempting to engage them in discussions of spiritual issues. Know that it’s crucial to understand where they’re coming from before explaining your own views. Be humble. Remember that God loves them as much as He does you and that it’s only His grace that has enabled you to come to faith before them.

* Tell stories. Realize that Buddhists don’t relate to logical discussions of principles nearly as well as they do to stories that illustrate those concepts.  Instead of simply explaining spiritual laws, let your conversations about each other’s lives naturally lead you to discuss spiritual issues. Understand that Buddhists tend to value religion primarily for what it can do for them rather than whether or not it’s true. Don’t debate truths; instead, talk about how Christ has helped you and how He can do the same for them. But be careful not to make Christ seem like a shaman who can be manipulated; discuss the importance of obeying Him and how doing so naturally leads to a better life. Share stories from your own life that convey how your experience of faith has benefited you. Listen as your Buddhist friends share stories from their lives and help them understand how experiencing Christ at work in their lives can transform them. Rather than trying to prove to them that the Gospel is true, try to demonstrate who Christ is as you talk with them.

* Don’t assume any prior knowledge of biblical concepts. Understand that you may likely have to start from scratch when discussing Christian ideas, since Buddhists often have a very different perspective on the same issues. (For example, Christians see prayer as communication between God the Father and His children, but Buddhists view prayer as repeating mystic phrases handed down from time immemorial.) Be sure to clearly explain what you mean when you talk about God, prayer, the Trinity, salvation, heaven, and sin. Listen carefully to what your Buddhist friends have to say and try to learn as much as you can about their spiritual views. Avoid using Christian jargon or clichés. When you sense an interest in a particular topic, ask your Buddhist friends if they would like to see what the Bible has to say about it. If you earn the right to study the Bible with any of your Buddhist friends, consider covering topics such as: suffering, forgiveness, and karma and Christ’s death. Introduce biblical passages that Buddhists can relate best to first, such as the stories of creation in Genesis, Christ’s parables in the New Testament, or the mystical elements in the Gospel of John. Avoid passages that can disturb and confuse Buddhists (such as accounts of animal sacrifices from the Old Testament) until they have a basic understanding of the Bible and genuinely want to read more. Since Buddhists are used to memorizing lists (such as the four relations of speech, the eight acts of low-born persons, and the ten faults), introduce them to the Ten Commandments, the nine beatitudes, or the nine fruits of the Spirit.

* Understand objections. Be prepared to discuss common objections that Buddhists have to Christianity. If your Buddhist friends think that Buddhism and Christianity are just different paths to the same goal, explain that all the world’s religions represent people’s best efforts to reach heaven by different paths, but there is only one religion that begins in heaven and comes down to people – Christianity, the religion of the One who came down from heaven, Jesus Christ. Understand that Buddhists are seriously offended by the idea of killing animals, which occurs in some Bible stories. As you discuss this issue, be sure to show them biblical passages that mention God’s care for His creatures (such as the story of Noah’s Ark) and explain that sin is so seriously evil that in Old Testament times it required a serious sacrifice. Mention the passage in Isaiah that shows that animals won’t harm each other in Christ’s new kingdom. Know that Buddhists can be alienated by how openly displays His emotions in the Bible, since they’re uncomfortable with strong displays of emotion. Explain the difference between God’s emotions and human emotions, such as the difference between people’s sinful anger and God’s righteous condemnation of sin, or the difference between people’s petty jealousy and God’s concern for the honor of His name. If your Buddhist friends think it’s too easy to receive salvation for free as a gift and people should earn their salvation instead, let them know that if faith is genuine, it will reveal itself in acts of love toward others. Explain that following Christ involves an inward change that is just as challenging as making enough merit to have a better rebirth the next time around. Help them count the cost of faith and understand that believing in Christ means: recognizing that they haven’t led a morally perfect life and are ensnared by sin, giving up living their own way and starting to live according to God’s way through repentance, and trusting Christ for salvation, which leads to transformed lives. If your Buddhist friends object that Christianity is a foreign religion for Asians, explain that Christ came to Earth for everyone, the Bible was written mainly by Asians, and many of the cultural practices of New Testament times are still current in places like Inner Asia today.

* Be culturally sensitive. Know that, to truly reach Buddhist people, you need to present the Gospel message in ways to which they can relate. Show respect for their cultural values, such as a simple lifestyle and the importance of community. Use worship styles that resonate with Buddhists, such as representing biblical truths in artistic form (as they do in thangkas). Avoid evangelizing through entertainment, since doing so could lead Buddhists to believe that Christianity is superficial. Use personal means of evangelizing through relationships, instead of impersonal means (like distributing tracts). In worship, use symbols to convey faith concepts. Know that Buddhists respond best to formal worship styles that include rituals. Involve all ages in worship rather than just catering to youth, and foster intergenerational friendships. Show reverence for God in all you do.

* Be patient. Give your Buddhist friends all the time they need to come to grips with unfamiliar concepts before they can fully understand the Gospel message. Just meet them at their points of need and work with them without rushing the process. Pray for them often and trust the Holy Spirit to work, drawing them to God at the right time and in the right ways. 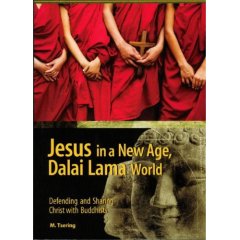 Adapted from Jesus in a New Age, Dalai Lama World (Defending and Sharing Christ with Buddhists), copyright 2006 by M. Tsering.  Published by Interserve USA, Upper Darby, Pa., www.interserveusa.org, 1-800-809-4440.
M. Tsering (a pseudonym used for security reasons) is a professional man who has worked among Tibetan Buddhists for two decades and still travels and ministers to them.