The Beautiful Circle of Grace

The Beautiful Circle of Grace

We would much prefer a magic mirror that lies to us rather than one that tells us the truth about ourselves. But we all experience moments when we are confronted with the truth of our limitations.

I came home from work one day with no clue that anything was wrong. My wife greeted me at the door and told me that Morgan, our two-year-old daughter, was still napping but had been sleeping long enough, and asked me to go wake her up. That’s a job I loved. When I opened the door to her room I noticed that a large pine chest of drawers had fallen over onto the floor. Initially, the possibility that Morgan was under the chest of drawers didn’t occur to me. I looked around the room for her and called her name—before I realized she had to be under there.

I frantically lifted the piece of furniture. Morgan looked lifeless. . . not moving or making any kind of noise. I yelled for my wife. Morgan was breathing but she was unconscious. She was black-and-blue and so swollen that she didn’t look like herself. I grabbed the phone and dialed 911—it rang and rang—but no one answered. I hung up. My wife had Morgan in her arms as we ran out to the car to rush to the hospital.

I was driving and my wife was in the backseat holding our daughter. I called 911 again, but still got no answer. It rang and rang. I was scared and was getting angry. The first time in my life I ever call 911 and no one picks up! I felt so powerless. Desperate. There was nothing I could do to help.

I was getting ready to dial 911 again, and if someone didn’t answer this time, 911 was going to have to dial 911 by the time I got finished with them. But then I could hear my wife praying over Morgan, crying out to God from the backseat. I hung up and started praying out loud with her. Our prayers were not orderly, and they were not well worded. I didn’t say to my wife, “You pray, then I’ll pray.” They sounded more like cries than a conversation.

Eventually we got to the hospital and ran in. Morgan still wasn’t moving or making any noise. The next few minutes are a bit of a blur for me. Doctors and nurses surrounded her as they decided what tests they needed to run to find out what was wrong. They looked for internal bleeding, skull fractures, broken bones. They were able to help Morgan regain consciousness and wake up—but she still wasn’t responding to us. They took her in to do X-rays and an MRI. They would only let one parent go back in the room with her. My wife went straight in, and I was left out in the hallway by myself.

I slumped down, sat against the wall, and continued to pray and cry out to God. If people were around, I don’t remember, and it wouldn’t have mattered. I didn’t care what anyone thought. I wasn’t worried about what I looked like or how I sounded. Desperate people don’t care about such things.

We spent the evening at the hospital. The doctors told us there didn’t seem to be any internal damage, but for some reason Morgan wasn’t able to move her left leg. The doctor explained there was a lot the medical community didn’t yet know about nerve damage . . . he didn’t think it was permanent but had no way of knowing when she would be able to move her leg.

Weeks later she still couldn’t move her leg, and we were warned the muscles in her legs might begin to atrophy. But what could I do? I couldn’t do anything. Every morning my wife and I would go into her room and wake her up and pray for her. And every morning we’d say the same thing: “Morgan, move your toes.” “Wiggle your toes, Morgan.” And every day she would look at her toes with a very determined stare. After a few moments she would look up at us with a smile and say, “They don’t work.”

But then one day . . . they did. They only moved a little, but they moved. Eventually all of the nerve damage was healed. Morgan made a full recovery and was back to running around.

Looking back, sitting on the cold floor of that hospital hallway, I remember the feeling of utter helplessness. There was nothing I could do. Here’s the thing, though: God had never felt closer or more real to me than he did in that moment. I have prayed in beautiful sanctuaries and I’ve worshiped in packed arenas, but God showed up most powerfully to me in a cold, lonely, quiet hospital hallway. My complete powerlessness was a necessary precondition to experiencing God’s total power and presence.

Perhaps you’ve been in a place where you could not deny you didn’t have what it takes.

If not, it’s coming.

If you have, it was probably a painful experience for you. But the truth about that moment is, while it may have been full of pain, it also had the most potential to be full of God’s power. Why? Because we’re able to receive God’s grace only to the extent we’re able to recognize our need for it.

When grace pours into our lives, it allows us to celebrate our weakness all the more.

It’s a circle, a beautiful circle.

If God’s power works best in weakness, then recognizing I don’t have what it takes will enable you to receive God’s grace, which enables you to celebrate your weakness, which makes room for more grace to pour into your life. You get caught up in a beautiful circle of grace. 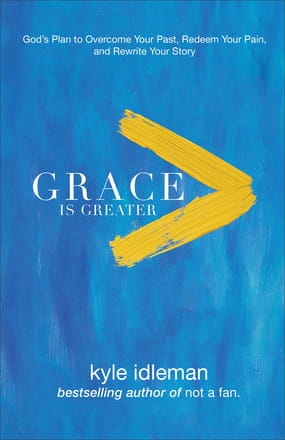 Kyle Idleman is teaching pastor at Southeast Christian Church in Louisville, Kentucky, the fifth largest church in America, where he speaks to more than twenty thousand people each weekend. He is the bestselling and award-winning author of Not a Fan, as well as Gods at War and The End of Me. He is a frequent speaker for national conventions and influential churches across the country. Kyle and his wife, DesiRae, have four children and live on a farm.