The First Christmas Song: Go Tell it on the Mountain

The First Christmas Song: Go Tell it on the Mountain

One of the most popular radio stations in Central Florida—where I reside—begins playing Christmas music on Thanksgiving Day. Their format is exclusively Christmas from the fourth Thursday in November until December 26th. Our FM Christian station has taken to the same format.

Since the days of my mother playing her holiday albums on the stereo system that meant more to her than the television ever could (I still have her Doris Day, Andy Williams, Bobby Vinton, and Connie Francis—to name a few—albums) and ushering in the “season with a reason,” I have linked the joys of Christmas with it’s music.

Is it any wonder? The Christmas story found in Luke’s gospel climaxes with a song heard from the heavens, sung by angels to poor shepherds watching their flock.

This year I’ve heard “Go Tell it On the Mountain” more than in seasons past. As I’ve sung along with the various artists who have released it on CD, I’ve been struck by the word “go.” The more I’ve pondered it, the more I’ve come to realize why that is exactly.

So Joseph also went up from the town of Nazareth in Galilee to Judea, to Bethlehem the town of David, because he belonged to the house and line of David. He went there to register with Mary, who was pledged to be married to him and was expecting a child. While they were there, the time came for the baby to be born, and she gave birth to her firstborn, a son. She wrapped him in cloths and placed him in a manger, because there was no room for them in the inn.

And there were shepherds living out in the fields nearby, keeping watch over their flocks at night. An angel of the Lord appeared to them, and the glory of the Lord shone around them, and they were terrified. But the angel said to them, "Do not be afraid. I bring you good news of great joy that will be for all the people. Today in the town of David a Savior has been born to you; he is Christ the Lord. This will be a sign to you: You will find a baby wrapped in cloths and lying in a manger." Suddenly a great company of the heavenly host appeared with the angel, praising God and saying, "Glory to God in the highest, and on earth peace to men on whom his favor rests." When the angels had left them and gone into heaven, the shepherds said to one another, "Let's go to Bethlehem and see this thing that has happened, which the Lord has told us about." So they hurried off and found Mary and Joseph, and the baby, who was lying in the manger. When they had seen him, they spread the word concerning what had been told them about this child, and all who heard it were amazed at what the shepherds said to them.

Notice the words of the shepherds. They begin with the words “Let us go…” When they had gone, the story says, and when they had seen; they went out and began to tell others. They “spread the word.”

It Didn’t Stop There

It is from Matthew’s gospel we read the story of the Magi’s visit. King Herod—a true maniac if there ever was one—heard that the magi were seeking the child born under “the star” and called him the “king of the Jews.” This “declaration” did nothing for King Herod except raise his madness to new heights. He called the Magi to him and said, “Go and make a careful search for the child.” (Matthew 2:8b, emphasis mine)

If you know this part of the story, you know this was Herod’s effort to kill the baby Messiah and that the magi did not follow through with his command. Jesus grew from baby to child, from child to man, and then—at the age of 30—began his ministry of drawing mankind back to the heart of their Heavenly Father.

From this moment on, the stories weave and blend, forming a tapestry of people hearing and people “going and telling.”

When Andrew heard what John the Baptist had said about Jesus, and then spent time with him, the first thing he did was run to his brother, Peter. He encouraged the one who would become the first head of the church to come along and experience a relationship with the Messiah. (John 1: 37-42)

Throughout the gospels we read of Jesus healing the sick as he ministered to them spiritually. Even when he told them to remain quiet about these things, they were unable to do so. They went to others and told them about the wonders of the Christ.

Even the most sinful could not remain silent. The story of the “woman at the well” in John 4 has inspired and intrigued women across the ages. She a sin-drenched woman, no doubt too ridiculed to come to the well when most of the women came but rather at the most difficult time of day, noon. But for once, having met Jesus, she was unashamed. It was no longer about who or what she was; it was now about who he is…and she had to tell everyone in Sychar.

It Mustn’t Stop There

We refer to Matthew 28: 16-20 as “The Great Commission.” Here we find the story of the risen Jesus and his disciples on a mountain where Jesus had previously told them to go. Some say this mountain is the Arbel Cliff. Maybe so. It would make sense as this cliff is more mountain than not. The Arbel overlooks the Galilee. Perhaps for the Messiah and his disciples it was a time of looking down at the path Jesus would have taken from Nazareth to the Sea of Galilee, where he called his first disciples, where so much of his ministry took place. Having looking back, they now look forward and Jesus says to them, “go…”

This year, as you sing “Go Tell it On the Mountain,” think beyond the story in the lyrics. It began with a few shepherds in a field, it moved to the lowly and the rich—the sick and the dying, both physically and spiritually—in Israel, and was then given to 11 men standing on a mountain.

Now it lies with you and me. Let us go. 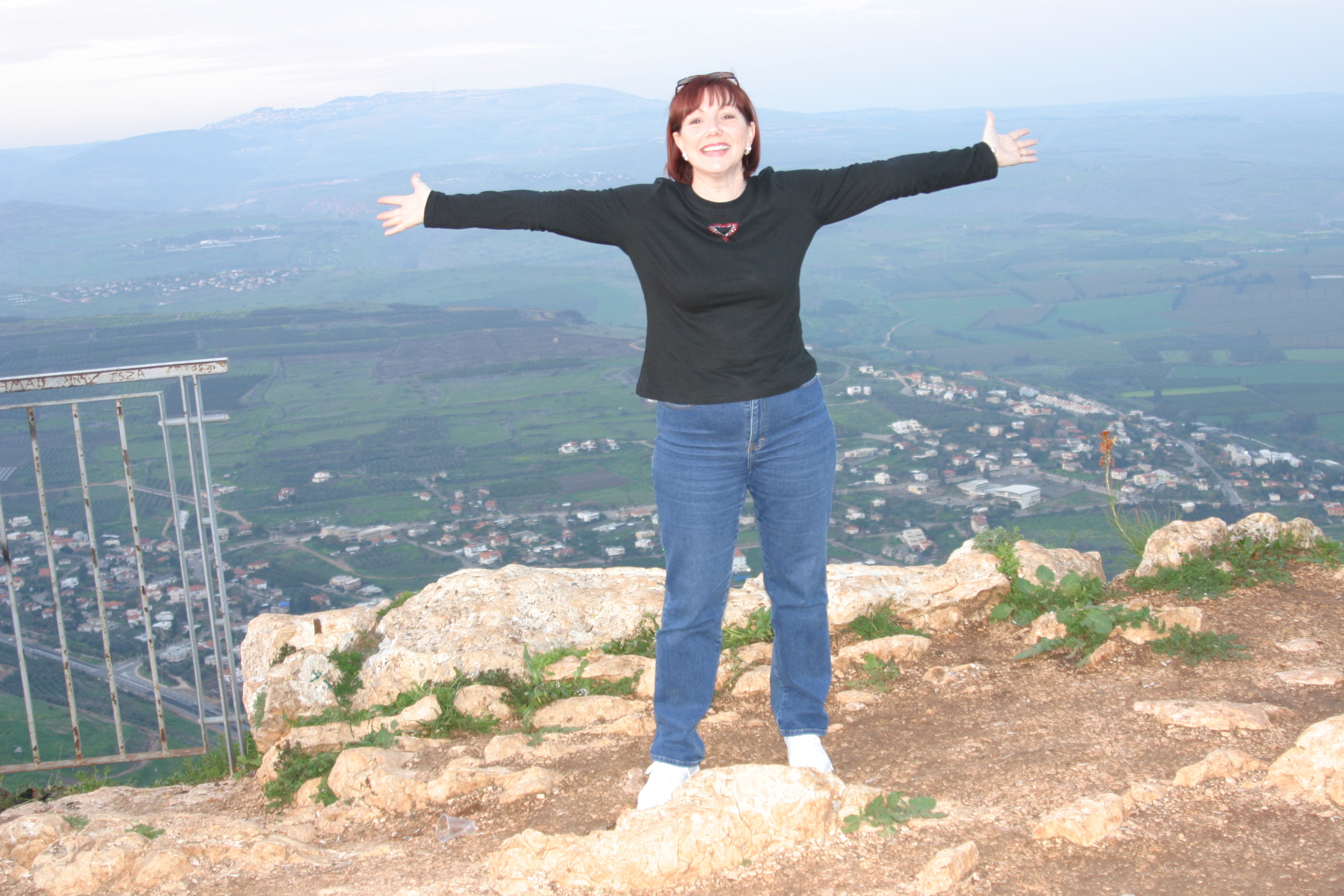 Eva Marie Everson is the author of a number of works such as Oasis, her recently released title from Baker/Revel. A seminary graduate, she speaks on a number of topics and can be reached by going t www.EvaMarieEverson.com

Photo taken of Eva Marie on the Arbel Cliff by Miriam Feinberg Vamosh.