What Does It Really Mean to Take the Lord’s Name in Vain?

What Does It Really Mean to Take the Lord’s Name in Vain?

So what exactly is forbidden by the third commandment? The word vain (as it’s rendered in the ESV) can mean “empty,” “nothing,” “worthless,” or “to no good purpose.” We are forbidden, therefore, from taking the name of God (or taking up the name or bearing the name, as the phrase could be translated) in a manner that is wicked, worthless, or for wrong purposes. This doesn’t mean that we have to avoid the divine name altogether. The name YHWH (or Yahweh)—“the Lord,” in most translations—appears some seven thousand times in the Old Testament. We don’t need to be superstitious about saying his name. But we must not misuse it.

The Old Testament identifies several ways in which the third commandment can be violated. Most obvious is to blaspheme or curse the name of God, which we saw already in Leviticus 24:16. But there’s more to the commandment than that. The third commandment also forbids empty or false oaths: “You shall not swear by my name falsely, and so profane the name of your God: I am the Lord” (Lev. 19:12; cf. Hos. 10:4a). When you make a declaration, swearing by God’s name, it must not be a false promise or one you do not intend to keep.

The third commandment also prohibits false visions and false claims to speak on God’s behalf, for such prophets “prophesy lies in my name” (Jer. 23:25). Strangely enough, sacrificing one’s children to the false god Molech was considered a violation of the third commandment because it profaned the name of God (Lev. 18:21). The Israelites were to stone the man who sacrificed his children in this way. Failure to do so would allow for uncleanness to permeate the camp, thereby besmirching the name of the Lord, who dwelt in the midst of his people.

Similarly, to unlawfully touch the holy things was considered a violation of the third commandment. We read in Leviticus 22: “Speak to Aaron and his sons so that they abstain from the holy things of the people of Israel, which they dedicate to me, so that they do not profane my holy name: I am the Lord” (v. 2). Likewise, the priests who cut corners in Malachi’s day were devaluing the name of God by their polluted offerings and cynical hearts (Mal. 1:10-14).

We’ve already seen that breaking the third commandment is considered a terribly serious sin, but why? There are only ten commandments, after all. Only ten words to summarize everything God wants from us by way of obedience. How did “watch your mouth” make the top ten? What’s the big deal about God’s name?

Think about Exodus 3 where God speaks to Moses from the burning bush. Moses asks God, “If I come to the people of Israel and say to them, ‘The God of your fathers has sent me to you,’ and they ask me, ‘What is his name?’ what shall I say to them?” God replies with those famous words: “I am who I am. . . . Say this to the people of Israel: ‘I am has sent me to you’” (Ex. 3:13-14). God names himself as the sovereign, self-existent one. In fact, the covenant name YHWH is probably connected to the Hebrew verb “to be.” God is that he is. That is his name.

We see the same thing in Exodus 33. Moses asks God to show him his glory. And in reply, God speaks to him his name: “I will make all my goodness pass before you and will proclaim before you my name ‘The Lord’” (v. 19a). The way to see God’s glory is to hear his name. To know the name YHWH, the merciful and gracious one, is not to merely know something about God; it is to know God himself (Ex. 34:6-8). God shows himself by speaking his name.

Our name is not tangential to our being. It marks us and identifies us. Over time, as people get to know us, our name embodies who we are. Think of someone whom you love deeply—your child, grandchild, parent, friend, or spouse. The name of that person represents more than markings on a page. When someone says the name Trisha, I am overcome with good thoughts, because I cannot separate my wife from her name. A whole flood of emotions, experiences, joys, and desires comes to me at the sight or sound of those six letters put together in that name.

Names are precious, which is why we don’t like our name ridiculed, twisted, or made fun of. I have a name that is fairly difficult to malign. With the middle name “Lee,” some people have called me “Heavenly Kevinly,” but that’s hardly an insult. The worst name to stick is the name my friends in seminary gave me. Although “DeYoung” is a common Dutch name, apparently it was unfamiliar in Massachusetts, because people there would meet me and think my last name was Dion. So to this day my seminary friends call me Celine. Some friends! It’s the only nickname I’ve ever had. Not the best I could hope for, but my heart will go on.

But funny nicknames given to us is one thing; irreverent use of God’s name is another. Everywhere in Scripture the name of the Lord is exalted in the highest possible terms. “O Lord, our Lord, how majestic is your name in all the earth!” (Ps. 8:1a). “Ascribe to the Lord the glory due his name” (Ps. 29:2a). The first petition of the Lord’s Prayer is “Hallowed be your name” (Matt. 6:9). The apostles proclaimed that “there is no other name under heaven given among men by which we must be saved” (Acts 4:12). Paul assured the Romans that “everyone who calls on the name of the Lord will be saved” (Rom. 10:13). And the culminating event in all of creation is when, “at the name of Jesus every knee should bow, in heaven and on earth and under the earth, and every tongue confess that Jesus Christ is Lord, to the glory of God the Father” (Phil. 2:10-11). The Bible does not want us to forget the holy importance of the divine name. 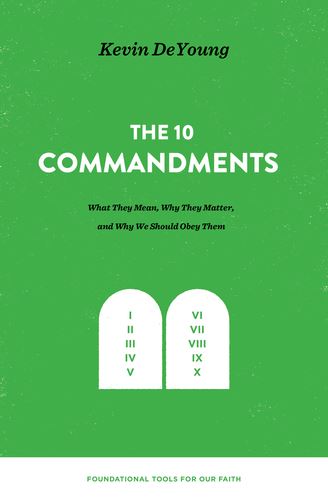 Excerpted from The 10 Commandments by Kevin DeYoung, originally published on Crossway.org. Used with permission.

Kevin DeYoung (MDiv, Gordon-Conwell Theological Seminary) is the senior pastor at Christ Covenant Church in Matthews, North Carolina. He serves as board chairman of the Gospel Coalition and blogs at DeYoung, Restless, and Reformed. He is assistant professor of systematic theology at Reformed Theological Seminary (Charlotte) and a PhD candidate at the University of Leicester. He is the author of several books, including Just Do Something; Crazy Busy; and The Biggest Story. Kevin and his wife, Trisha, have seven children.

This article is part of our 10 Things You Should Know Series from Crossway.org. Here are other popular articles in this series:

10 Things You Should Know about the Ten Commandments

10 Things You Should Know about the Presence of God

10 Things You Should Know about the Love of God

10 Things You Should Know about God’s Attributes

10 Things You Should Know about the Trinity

10 Things You Should Know about the Biblical Covenants

10 Things You Should Know about Missions and the Local Church

10 Things You Should Know about the Garden of Eden