I crave contentment. I’d love to nestle into a hammock of comfort, secure in the knowledge that I have everything I could ever need.

But we live in a consumer-driven culture that tells us there’s always one more thing to want, and hungry, restless souls that whisper to us that contentment is something we can master…or, at the least, something we might eventually acquire or earn.

I’ve spent more than four decades in suburban churches where I hear the word “contentment” used as sort of a mark of sacrifice in responding to consumer wish lists: “I wanted to remodel my kitchen, but God is helping me learn to be content with a new glass tile backsplash instead.” We drain contentment of its meaning when we treat it as though it is a consolation prize or a place-holder for the thing we really want. Contentment is not about settling for a less-fancy version of something we’ve seen advertised on basic cable.

What does contentment mean in the Bible?

1 Timothy 6:6 tells us, “Godliness with contentment is great gain.” I suspect Paul, who penned these words to his young protégé Timothy, would be very confused by the way in which we Christians often use the word “contentment.” The Greek word for contentment in this verse is autarkeia, and it means that a person is resting in a place of safety and security in their lives. The context for this verse is a discussion of the greed of false teachers and the lure of our own acquisitive desires. Godly contentment says “enough” instead of spouting Christianized versions of “I want more.” I appreciate the irony of Paul saying that godly contentment is the only “more” for which we should be aiming.

"I don’t have contentment all figured out."

I don’t have contentment all figured out. When we lost our home to a short sale in 2012, the bank gave us ten days’ notice to vacate our property. At the time, I thanked God for his nearness during the tumultuous and uncertain months as we waited for a decision from the bank about what would happen to our home, and for his good gifts of family, friends, and a more-than-adequate rental roof over our heads. But I also grieved the hit we took to our finances, our sense of security as we were rapidly approaching retirement age, and having to say goodbye to our slim slice of the American Dream of home ownership.

"I began to discover that contentment had little to do with my emotions..."

A deeper understanding of what contentment really meant began to be revealed in the midst of never-unpacked boxes of books (because why unpack them when I’m just going to have to box them up and move again in a year or two?) and curtains pinned instead of hemmed (because why hem them when they might not fit the windows in the next place we may live?). Until then, I’d always thought of contentment as a description of an uber-calm emotional state, something like the tryptophan-fueled satiation that follows a Thanksgiving dinner.

I began to discover that contentment had little to do with my emotions, but instead with choice. When Paul was commending his friends in Philippi for their concern for him, he assured them he was more than fine no matter what his circumstances were: “…I have learned to be content whatever the circumstances. I know what it is to be in need, and I know what it is to have plenty. I have learned the secret of being content in any and every situation, whether well fed or hungry, whether living in plenty or in want. I can do all this through him who gives me strength.” (Philippians 4:11-13)

How do we cultivate committment in every circumstance?

Though I’ve often heard the last sentence in this passage applied to overcoming the challenges we may face in our lives, Paul’s words in context are specific to cultivating contentment in every circumstance. Making the choice to rest in the security of a trusting relationship with God challenged my ideas about what true contentment would look like: temporary comforts such as a full stomach and a safe place in which to lay our heads are not his goal for my life. They are not the destination for my faith. He is.

"He was teaching us that our true identity is that of pilgrims."

There was no fame-and-fortune bait on the hook when Jesus told Peter He’d make him a fisher of men. There was no promise of celebrity when God spoke to Abram and told him to leave the comfort of home and family. Both men’s lives—and the lives of most others highlighted in the Bible—became less comfortable and far more uncertain after God called them.

Though our reason for leaving our home was because of a downturn in our twenty-first century American economy rather than in a response to a call from God, I recognize that God was at work in these circumstances. He called my husband and I to follow him faithfully each day, no matter what our zip code or mailing address was. He wasn’t sending us into exile from our American Dream. He was teaching us that our true identity is that of pilgrims. This reality continues to recalibrate my understanding of contentment.

"I will likely never know the 'why'"

Last year, we faced a Job-like string of tests including my husband’s job loss, some serious health issues for me, followed by a freak fall on a rain-slicked deck that left me with broken bones in two places, followed by a life-threatening blood clot, and, in the midst of it all, an infestation of black mold in our latest rental house that required us to move temporarily into a hotel so the problem could be remediated. The treatment didn’t work the first time, so we had to vacate the property a second time. God never revealed to Job why he faced so much suffering and loss, and I understood that on this side of heaven, I will likely never know the “why” behind that string of events.

Contentment in those circumstances didn’t mean accepting it all with a placid smile pasted across my face. It meant not trying to decipher why these things were happening to us, but instead living these questions: Can I trust Him even when I don’t understand why these things are happening? Will I follow Him even though it hurts? And do I have eyes to see His perfect care and abundant provision for me through it all?

True, biblical contentment can and does transform each one of us into pilgrims, committed to following Jesus, no matter where we live, what challenges we face, or what color our backsplash tile may be. 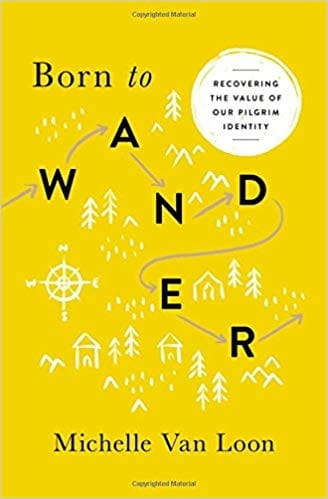 Since coming to faith in Christ at the tail end of the Jesus Movement, Michelle Van Loon’s Jewish heritage, spiritual hunger, and storyteller’s sensibilities have shaped her faith journey and informed her writing. She is the author of five books and a regular contributor to Christianity Today’s women’s blog, In Touch magazine, and is the co-founder of www. ThePerennialGen.com, a website for midlife women and men. She’s married to Bill, and is mother of three and grandmother of two. Learn about her writing and speaking ministry by visiting her website,www.michellevanloon.com.

NEXT: What Wifely Submission Does Not Mean