Who Was Susannah Spurgeon? - 5 Important Things You Need to Know

Who Was Susannah Spurgeon? - 5 Important Things You Need to Know

“I’ve heard of Susie Spurgeon, but I really don’t know much about her.” That comment is representative of many people when they discover Susie: The Life and Legacy of Susannah Spurgeon. Her husband, Charles, is one of the most prominent personalities in Christian history, and his life has been often considered in numerous biographies, doctoral dissertations, and articles. Why is it then that Susie is little known?

It may be that Charles Spurgeon was a large figure who cast a giant shadow. He penned 135 books and over 63 volumes of sermons. He edited a monthly magazine, pastored what we would call today a megachurch, gave oversight to over 60 benevolent institutions, and preached up to ten times a week. He remains one of the most widely read authors of Christian literature in our day.

Another reason for Susie’s relative obscurity may be found in the culture of the times. Susie lived from 1832–1903, coinciding with Queen Victoria’s reign from 1837–1901. In the Victorian Age, women were mostly known in connection with their husbands. Therefore, when biographers of Spurgeon typically introduce Susie at the time of her meeting of Charles, it is because she is thought of primarily as his wife.

However, Susie Thompson Spurgeon was a remarkable woman in her own right. Here are several fascinating things to know about Susie.

1. Susie Was a Prolific Author

Susie coedited Smooth Stones Taken From Ancient Brooks in 1855 with Charles, and in 1886 she authored Ten Years of My Life in the Service of the Book Fund. She had a season of her most prolific writing from 1886 through 1901. Her son Thomas Spurgeon remembered his mother as having “rare literary gifts.”

Susie’s written treasures have mostly been obscured beneath the mountain of material by and about her famous husband. Her own literary prolificacy was cultivated by her serious commitment to the Bible, her voracious reading of devotional literature, and her thirty-eight-year exposure to the example of Charles.

Her readers, partly because of her personal writing style, enjoyed Susie’s books. Her writing was descriptive, even flowery and poetic — a style not usually seen today, but embraced by her readers. She wrote: “We are such old friends now, my dear readers and I.”

Susie’s writing is most remembered today through C. H. Spurgeon’s Autobiography. This colossal work, coedited and contributed to by Susie, was originally produced in four volumes. It is a repository of biographical narrative and essential for not only digesting the life and character of Charles Spurgeon, but also that of Susie. The first volume appeared in 1897, and the fourth was published in 1900.

2. Susie Persevered through Trials by Faith in Christ.

Marriage to Charles brought unique challenges due to his popularity, his critics, and his not infrequent travels away from home, which were both ministry and health-related. However, Susie faced what many would consider insurmountable challenges of her own. Susie has recurring health challenges for many years. Around 1868–69, she required surgery, and the famed gynecologist James Y. Simpson operated on her. The specifics of her affliction are unknown, but we know that she suffered from gynecological problems.

Her pain around this difficult season caused episodes during which she was not able to lift hand or head; even when her pain subsided, it was rare that she could travel even a mile from home without suffering for days after. Yet Susie didn’t view her home as a prison, nor did she give in to the temptation to resign herself to a life of inactivity due to her sickness. There is no evidence that she was a complainer nor did she blame God for her sufferings. She wrote: “If we would trust Him for the keeping, as we do for the saving, our lives would be far holier and happier than they are.”

3. Susie Cared for Poor Pastors and Their Families

So severe were Susie’s longtime health afflictions that no one would have blamed her if she had chosen to nurse her sicknesses at home and not exert herself in ministry. However, she put her hands to work in the service of her Lord. 1875 was a pivotal year for Susie. Charles had handed her a draft of his new book, Lectures to My Students. Susie excitedly declared that she wished every pastor in England could have a copy. Charles gently exhorted her to make her wish a reality. His simple words of encouragement launched Susie to her lifetime commitment of ministering to poor pastors and their families.

Mrs. Spurgeon’s Book Fund put Susie in touch with needy pastors across the British Isles. She discovered the depth of poverty that many of them faced: some lacked sufficient medical care for their family; others could barely clothe their children much less themselves; food was often scant, and undernourishment plagued some pastors’ homes. In the midst of such dire circumstances, these ministers couldn’t consider spending their few coins for books. Therefore, along with their cupboards, their bookshelves were bare and their churches were malnourished spiritually. Susie was burdened over this.

By the time she died in 1903, through the Book Fund and the Pastor’s Aid Fund, Susie had raised enough money to give away over 200,000 books to impoverished pastors. She also provided funds, clothing, stationery, and other necessary items for them. She urged fellow Christians to rise up and help relieve the pathetic circumstances plaguing the homes of many faithful servants who struggled to survive.

4. Susie Was a Church Planter

A surprising work of Susie, primarily because of her life situation, age, and physical fragility, is that she planted a Baptist church. By 1895, Susie, at 63 years old, had been widowed and was still bothered by continuing health challenges. However, she was determined to remain as active as possible in the service of her Lord, and her health, in fact, had improved enough for her to do a bit of traveling.

As her home in London was undergoing repair, Susie visited the beach community of Bexhill-on-Sea. While there, she discovered that no Baptist church existed and determined to remedy the void. Susie sought God’s will in prayer. She determined that her longtime friend Pastor J. S. Hockey, along with his wife, was God’s choice to go to Bexhill. When she proposed the idea to the pastor and Mrs. Hockey, she offered them no easy enterprise. “It was no path of roses in which I propose that my friends should travel; it is no easy matter to go to a strange place, where you do not know a single soul, and introduce yourself as a probable pastor for a non-existent church!”

Incrementally, Beulah Baptist Chapel came into being as a memorial to Charles Spurgeon. In 1898, it opened its doors without debt, without resorting to fundraising campaigns, and for the purpose of gospel preaching. After Susie’s death, the church erected a tablet to her honor including these words: “Through Her [Susie’s] Initiative Under God This Church Was Founded And Largely By Her Liberality These Buildings Were Erected.” How did Susie, with her sufferings and limitations, found and erect the buildings of Beulah? She firmly relied on God to provide. She believed it was impossible not to see “His hand in it all.”

5. Susie Solidified the Legacy of Her Husband

Susie would say that her greatest legacy was not the Book Fund, nor was it her church planting, nor her literary offerings, nor her perseverance in various sufferings. Her greatest legacy was her ministry to partner with and love her beloved Charles. Susie resolved: “It was ever the settled purpose of my married life that I should never hinder him in his work for the Lord, never try to keep him from fulfilling engagements, never plead my own ill health as a reason why he should remain at home with me.” Susie never regretted her “settled purpose,” though at times she felt intense loneliness due to Charles’ numerous absences from home.

Until 1868, Susie actively served alongside Charles at church, sometimes traveled with him across the Continent (she even hiked the Alps), and provided a home warm with hospitality for their friends. She prayed for him, helped him study for sermons on Saturday evenings, read to him through times of depression, wept with him in his trials, and faithfully wrote to him when he was away from home. Though Susie would have been justified in requesting that Charles curtail his busy schedule, she encouraged him to fulfill his ministry. Susie’s marriage to Charles was both romantic and difficult. Charles could not have met the demands of his ministry, written so prolifically, or left such an indelible mark on history without her support. Susie’s encouragement was an investment in Charles but also an investment in the spread of the gospel. After Charles’s death, Susie spent the rest of her life promoting the gospel that he loved through her work of preserving his story in the Autobiography and through the translation and worldwide dissemination of his books and sermons.

Susie’s only previous biographer, Charles Ray, surmised, “If greatness depends on the amount of good which one does in the world, if it is only another name for unselfish devotion in the service of others—and surely greatness is all this—then Mrs. C. H. Spurgeon will go down to posterity as one of the greatest women of her time.” Susie was with Charles in Mentone, France, during the last three months of his life. Charles and Susie referred to that time as “their honeymoon over again,” and she later described those months as “perfect earthly happiness.” In reflecting on her life with Charles, she spoke of “two pilgrims treading this highway of life together, hand in hand, heart linked to heart.” Their earthly hands were separated on January 31, 1892, but in October of 1903, they were reunited at the throne of God where they praised God together.

At the grave of Susie Spurgeon, Pastor Archibald Brown stated: “Farewell, sister! We praise God for thee. For the help thou didst bring thy husband in his ceaseless toil and hard-fought battle, we are grateful.” He furthermore remembered her ministry to pastors and the legacy left behind in her twin sons, Charles and Thomas. “Thy sons survive thee; they follow the hallowed footprints left; and, with one heart, we pray, ‘Thou God of father and mother, be Thou Their glorious all-sufficiency, and let Thy benediction descend upon their children, and their children’s children, until Jesus come, and we are all gathered to the Eternal Home.’”

Your ways, O Lord, are past finding out, but they are very gracious and tender; and this turning of seeming evil into good, of making your children’s trials grow into triumphs, and their pains into pleasures, is a wonderful proof both of your pity and your power. – Susannah Spurgeon 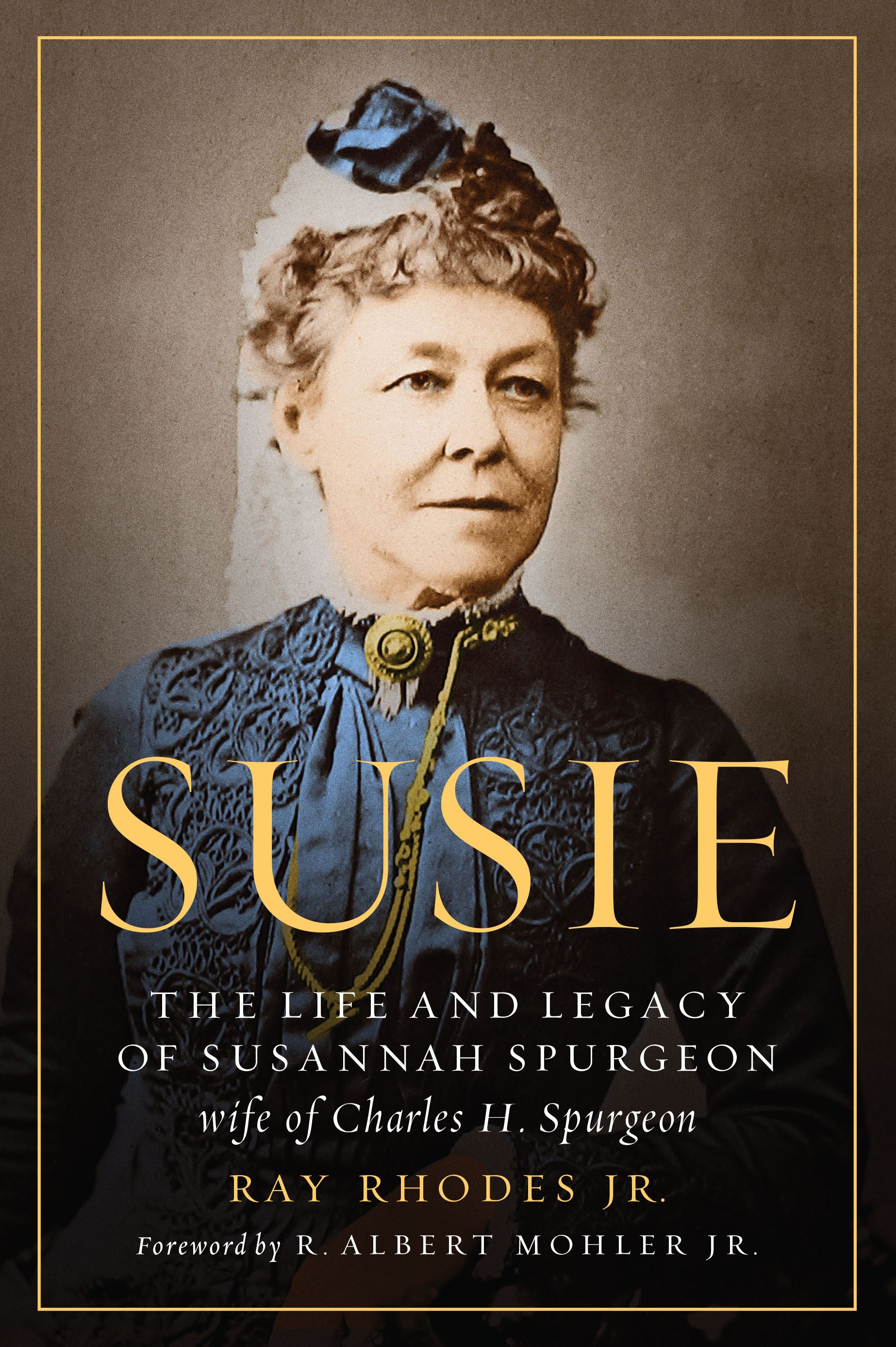 RAY RHODES, JR. serves as founding pastor of Grace Community Church of Dawsonville, GA and as president of Nourished in the Word Ministries. He has served four congregations over three decades of pastoral ministry and for fifteen years, he has led Nourished in the Word. Ray has published several books and holds theological degrees from New Orleans Baptist Theological Seminary (M.Div.) and The Southern Baptist Theological Seminary (D.Min.). He is married to Lori and they are blessed with six daughters and four grandchildren. Ray has long been a Spurgeon enthusiast, and his doctoral thesis focused on the marriage and spirituality of Charles and Susannah Spurgeon.