Living on the offensive against Satan

Do you not know that if you present yourselves to anyone as obedient slaves, you are slaves of the one whom you obey, either of sin, which leads to death, or of obedience, which leads to righteousness? But thanks be to God, that you who were once slaves of sin have become obedient from the heart to the standard of teaching to which you were committed.

History books tell us that when the slaves were liberated at the end of the Civil War, many of those who had formerly been under the bondage of slavery refused to leave their slave masters and pursue a life of their own. They chose to remain under bondage because it was the only thing they’d ever known!

There are many Christians today who are still under the bondage of their past. That’s why every believer must always ask himself as he considers doing something: “Is this thing becoming my master? Is this controlling me? Does it have the potential to control me?”

In my years of ministry, I’ve seen pastor after pastor lose his job and his congregation because of this very issue. So many believe they’re above becoming a slave again to sin and they simply refuse to acknowledge their potential weakness.

So when it comes to sin, don’t buy into the lie that you’re immune to falling back into old patterns of behavior. But when that temptation does come, remind yourself that you’ve been freed already through the death and resurrection of Christ. Live each day on the offensive knowing that, while the enemy prowls around, you have victory in Christ!

LIVE ON THE OFFENSIVE AGAINST SATAN SO WHEN TEMPTATION TO SIN COMES YOUR WAY, YOU CAN KNOW THAT YOU’VE BEEN FREED FROM SLAVERY TO SIN!

OUR GIFT TO YOU! 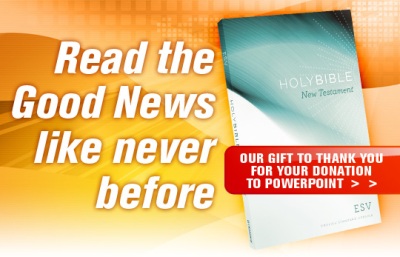 I want to send you a special gift that will help make getting into God's Word easy for you or someone you care about.

It's a copy of the ESV Share the Good News New Testament, and I'd like to send it to you as my way of saying thanks for your online donation to PowerPoint Ministries.

This version of the New Testament includes reading plans and topical guides for locating key verses and passages, and it's perfect for people who are new to the Bible or those who like to find a quick Bible reference.

So request a copy of the ESV Share the Good News New Testament when you give your online gift today.

Thank you for giving to help PowerPoint continue to proclaim the Good News of Jesus Christ!  --Jack Graham