There was a great preacher once whose wife died. Their little girl didn’t fully understand all that had happened. But one day while she was in the car with her father, she saw the shadow of a truck passing by. The setting sun made the shadow huge, much bigger than the truck.

The little girl said, “Daddy, look at the big shadow.”

He said, “Sweetheart, would you rather be hit by the shadow of the truck or by the truck?”

He said, “That's right, darling. And it was only the shadow that hit Mama. The truck hit Jesus two thousand years ago at Calvary.”

That’s why David calls it “the valley of the shadow of death.” Jesus has taken the sting out of death, the dread out of the grave! He has become our victor!

Many people fear death— a shadow looming over each of us, representing the unknown. Yet Jesus disarmed death and took away its power. The believer in Christ can have this assurance: beyond that shadow is the sunlight of the eternal morning. Speak with the Lord right now and share with Him something you fear. He already knows about it anyway. Picture yourself giving that fear over to Him. Place it in the nail-scarred Hand. It is a risen, victorious Hand!

For more from Love Worth Finding and Pastor Adrian Rogers, please visit www.lwf.org.

You can also listen to Adrian Rogers at OnePlace.com. 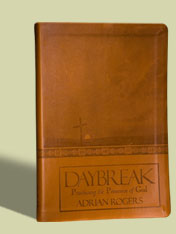 Daybreak: Practicing the Presence of God

This devotional journal with daily applications was designed several years ago by Adrian Rogers. This leather-bound keepsake will be a treasured addition to start your day out right!

Each day you will begin with a nugget from one of his messages, a reading from God's Word, and a place to write your "Spiritual concerns and prayer requests." Order your copy today.

For more Adrian Rogers resources you may visit the Love Worth Finding bookstore at www.lwf.org.