Franz is a hard-working Austrian farmer who loves his family and is devoted to his faith.

In the village he lives – a picturesque valley resting between snow-capped mountains – the world’s problems seem light years away. It’s a scene straight out of a postcard.

Soon, though, the world’s problems come to his doorstep when he receives a life-changing letter in the mail. He’s been drafted by the Nazis to serve in a quickly expanding war.

The year is 1939, and even though the war is popular within his village, Franz opposes it.

He views Nazi leader Adolf Hitler as evil. He sees the war as immoral. If there is a good side in the war – he says – it’s not the Nazis.

“What’s happened to our country – to the land we love?” he asks his wife.

It’s all part of the new film A Hidden Life (PG-13), which tells the inspiring tale of a Catholic man who refuses to fight for Hitler’s army and pays the ultimate price for his opposition.

It’s one of the best movies of 2019 and was directed by Terrence Malick (The Tree of Life).

Here are four things you should know about A Hidden Life: 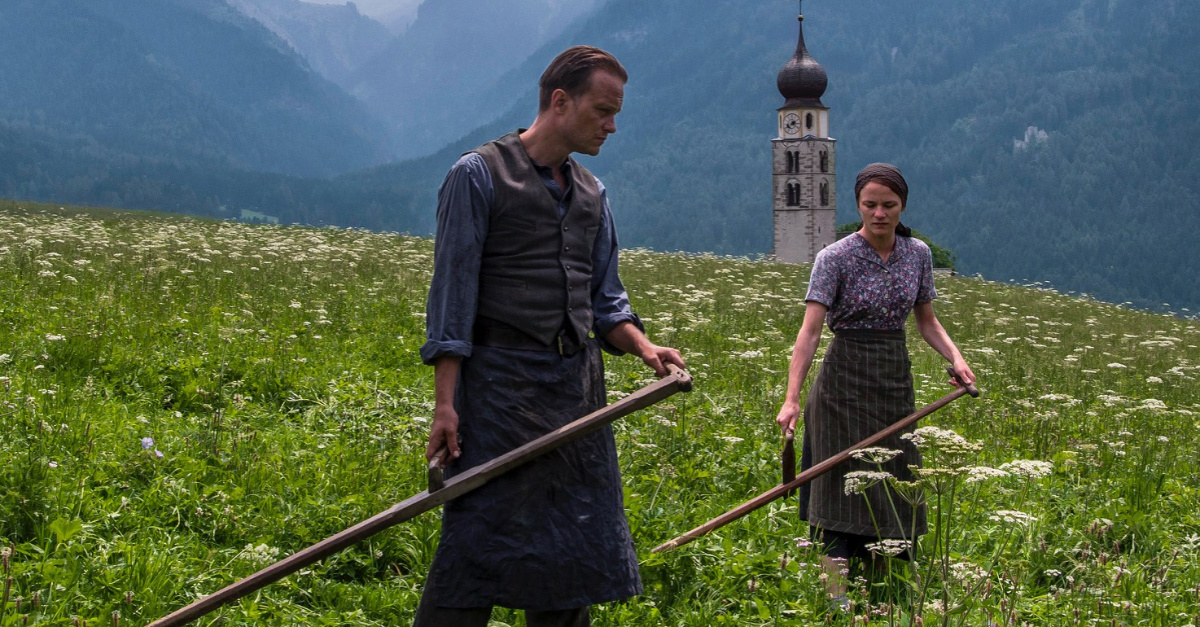 The film tells the real-life story of Franz Jägerstätter, a farmer who was growing deeper in his faith in the 1930s while most of his countrymen were warming to Nazism. In 1938, he was the only local citizen to vote against Germany’s annexation of Austria, according to a Vatican biography. Eventually, he became convinced that the war was evil.

“It is very sad,” he wrote. “to hear again and again from Catholics that this war waged by Germany is perhaps not so unjust because it will wipe out Bolshevism. … But now a question: what are they fighting in this Country – Bolshevism or the Russian People?”

He was called up for military service in 1943 but refused to swear allegiance to Hitler. (He was willing to serve in a non-violent medic role, but that, too, would have required an oath.)

His execution meant he left behind a wife – they were married just a few years earlier, in 1936 – and children.

“People worry about the obligations of conscience as they concern my wife and children,” he said shortly before his execution via guillotine. “But I cannot believe that, just because one has a wife and children, a man is free to offend God.” A Hidden Life depicts Jägerstätter as a man of faith who is driven to follow God’s will, no matter the cost.

When the village’s mayor delivers a public pro-Nazi speech to cheers and lambastes the “other races,” Jägerstätter quietly walks away, appalled by what he’s hearing.

Eventually, he tells his priest, “We’re killing innocent people, raiding other countries, preying on the weak.”

The priest, though, encourages him to join the Nazis.

Not happy with the priest’s answer, Jägerstätter meets the bishop.

“If God gives us free will, we’re responsible for what we do,” the farmer tells the bishop. “... If our leaders are not good, if they’re evil, what does one do? I want to save my life, but not through lies.”

“You have a duty to the fatherland,” the bishop replies.

Jägerstätter, though, decides he would rather obey God than men (Acts 5:29). It’s a stance that endangers his life and costs him life-long friends, too. In a village where citizens harvest the fields and share the bounty, his opposition to Hitler is no small matter. Jägerstätter and his wife are shunned.

His wife stands by his side, grieved by what is to come but comforted knowing they are following God’s will. 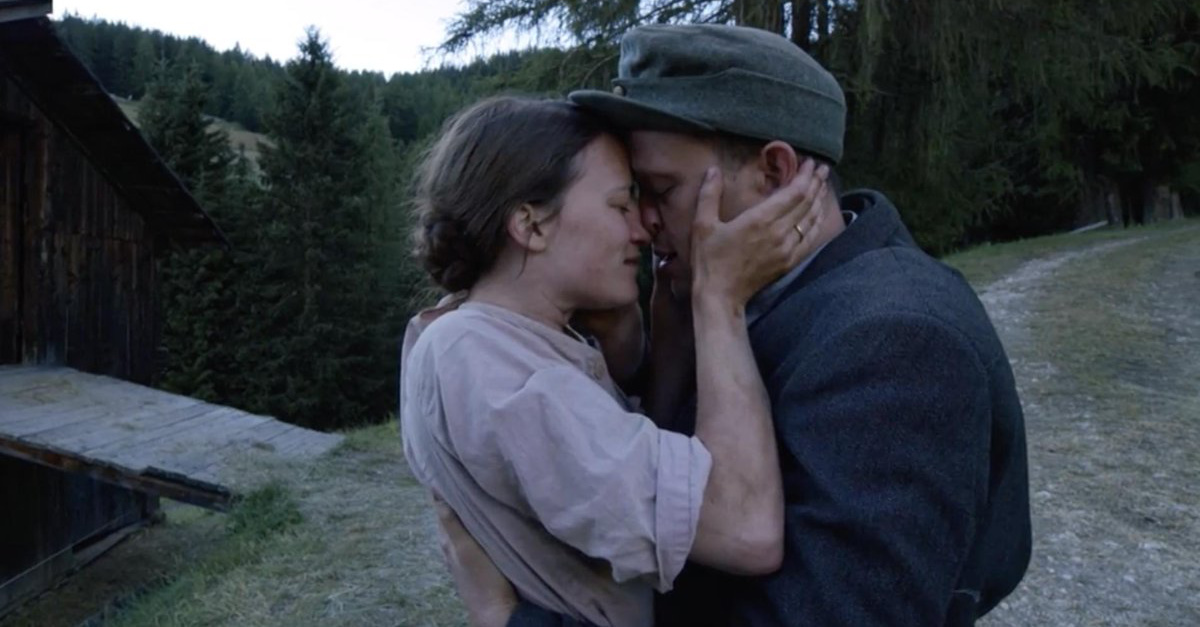 A Hidden Life features the visual storytelling that makes Malick’s films so unique. Lengthy shots of awe-inspiring Austrian landscapes are coupled with prolonged views of farmers working in the fields. Scenes that would last only a few seconds in other films span a couple of minutes in A Hidden Life. The film is beautiful, but it’s also long (the running time is nearly three hours).

The movie has the look of an award-winning film but the realism of a well-done documentary. You feel like you’re there, in Austria, watching a gut-wrenching tragedy unfold. 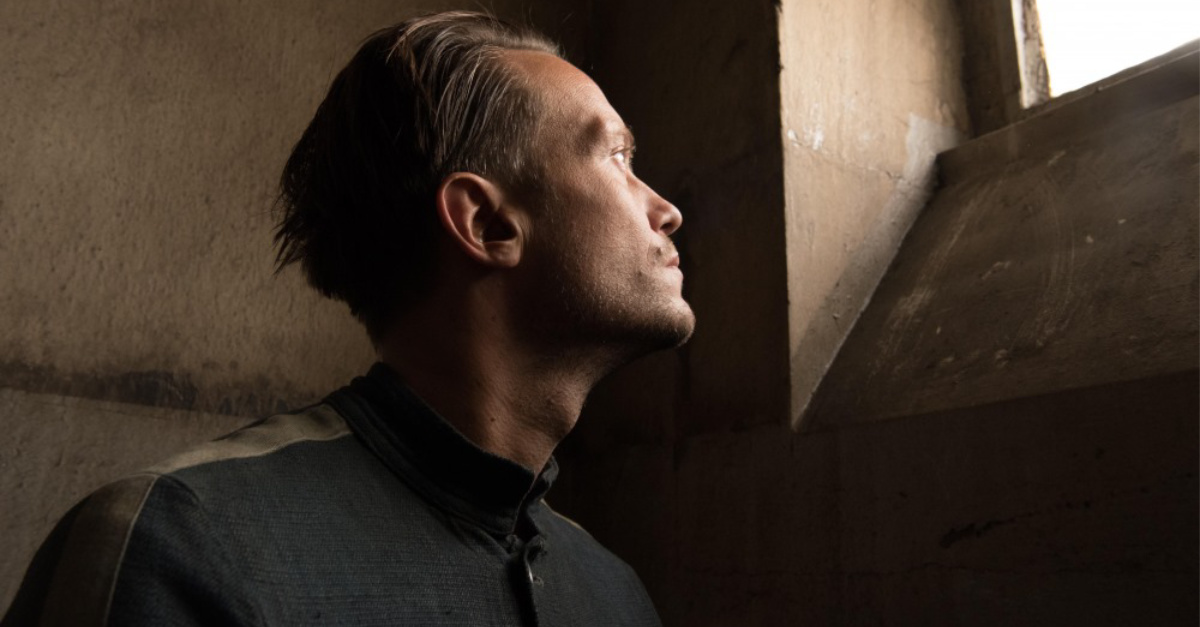 A Hidden Life forces us to look inward and reflect on our own beliefs. Would we have the courage and conviction to oppose everyone around us? Would we be willing to die for what is right? And is our faith strong enough to help us persevere in such a trial?

Late in the movie, Jägerstätter’s attorney sits across from him in the prison, pleading for him to change his mind. If you swear allegiance to Hitler and agree to serve in a military hospital – Jägerstätter is told – they will drop the charges.

Jägerstätter, though, declines. We then see him quoting Psalm 23 and praying. Moments later, he is executed.

Jägerstätter may have led a “hidden” life, out of the spotlight, but his quiet action has inspired millions.

Rated PG-13 for thematic material including violent images. Content warnings: A Hidden Life contains no coarse language or sexuality. Disturbing content includes images of war violence on a black-and-white reel; images of a guillotine (and sounds of it falling, although we don’t see the execution); and men fighting.