4 Things to Know about Black Widow

Natasha Romanoff is a smart, mysterious young woman who is on the run from her past.

She’s feeling sorrow over multiple tragedies from her childhood.

She’s feeling guilty over several misdeeds as an adult.

Mostly, though, she’s lonely. Her superhero family – the Avengers – is defunct. And her real family? They’re nowhere to be found.

Perhaps all these “demons” will benefit Natasha, aka Black Widow. As her mom once told her, “Pain only makes you stronger.”

Soon, though, Natasha is forced to confront the pain of her past when her long-lost sister, Yelena Belova, recruits her to stop a madman who has developed a mind-controlling technology that turns young orphan girls into powerful assassins dubbed “black widows.”

It’s a conspiracy that – long ago – targeted Natasha and Yelena.

Can they stop him? 1. It's a Throwback, an Origin story and a New Phase

Remember when Natasha Romanoff died during a critical scene in Avengers: Endgame? Don’t worry: Black Widow doesn’t erase history. Instead, it turns back the Marvel clock and gives us a throwback tale that is set before Endgame but after the events of Captain America: Civil War. In that latter movie, the so-called Slovakia Accords were adopted, placing the Avengers under the control of the United Nations. But not every Avenger agreed to the accords. As Black Widowopens, two of them – Captain America (Steve Rogers) and Romanoff – are on the run from the world’s governments.

The film serves as an origin story by revealing details about her childhood. We learn where she was raised, why she became independent, and how she came to peace with her tragic past.

Finally, Black Widow is the first film in the so-called fourth phase of the Marvel Cinematic Universe. The next two films in the fourth phase are Shang-Chi and the Legend of the Ten Rings (Sept. 3) and Eternals (Nov. 5). 2. It's Plot-Twisting and Fun

Black Widow moves slow at times, but it makes up for it in plot twists and action. If you’re not paying attention, you will be left behind. (Google “Marvel Red Room” if you need some pre-film prep.)

It’s a movie that works best on the big screen. (Disney Plus is simultaneously offering it for at-home viewing for an additional fee.) The film’s opening scenes alone are worth the price of admission. We experience a cars-vs.-plane chase scene, then a motorbike-vs.-cars chase scene, then a chase scene in the subway terminal.

The film’s comedic moments are smart and truly hilarious. (Belova pokes fun at the famous superhero three-point landing – and even tries it once before deciding it’s pointless. Meanwhile, Natasha’s Russian-speaking parents are so funny that they could carry their own series.)

The film does include a post-credit scene that’s worth watching, although it harkens more to an upcoming Disney Plus series than to the movie you just watched. 3. It's All about Family

Natasha claims she’s better in life “on my own,” but we shouldn’t believe her. In Black Widow, we watch her and her younger sister chase not only the bad guys but also the ideal – a family – they never enjoyed.

The film opens with a scene of a middle school-aged Natasha happily playing in the yard with Yelena as their mom supervises. Soon, though, they are separated from their parents, sparking a horrific series of events that sees Natasha and Yelena also separated and learning to survive on their own.

A shared desire to stop a bad guy brings them back together as adults.

Reminiscing about the past, Yelena tells Natasha she has invented a fictitious tale about her family to tell others: Her parents still live in Ohio, and Natasha is a science teacher out West. When Yelena asks Natasha if she’s created such a story, the latter replies, “I never let myself be alone enough to think about it.”

Black Widow is a superhero story with real-world application: We may pretend we want to live a solo life, but God designed us to crave friendship and family. The facade worn by Natasha Romanoff is worn by countless people around us each day.

That’s not the only lesson in Black Widow. It touches on the ethics of just war (Natasha regrets having a hand in the death of a little girl). It raises tough questions about culpability within dictator-like societies (Natasha’s parents faced this). It even urges us to face our own “demons” from the past, as Natasha does. 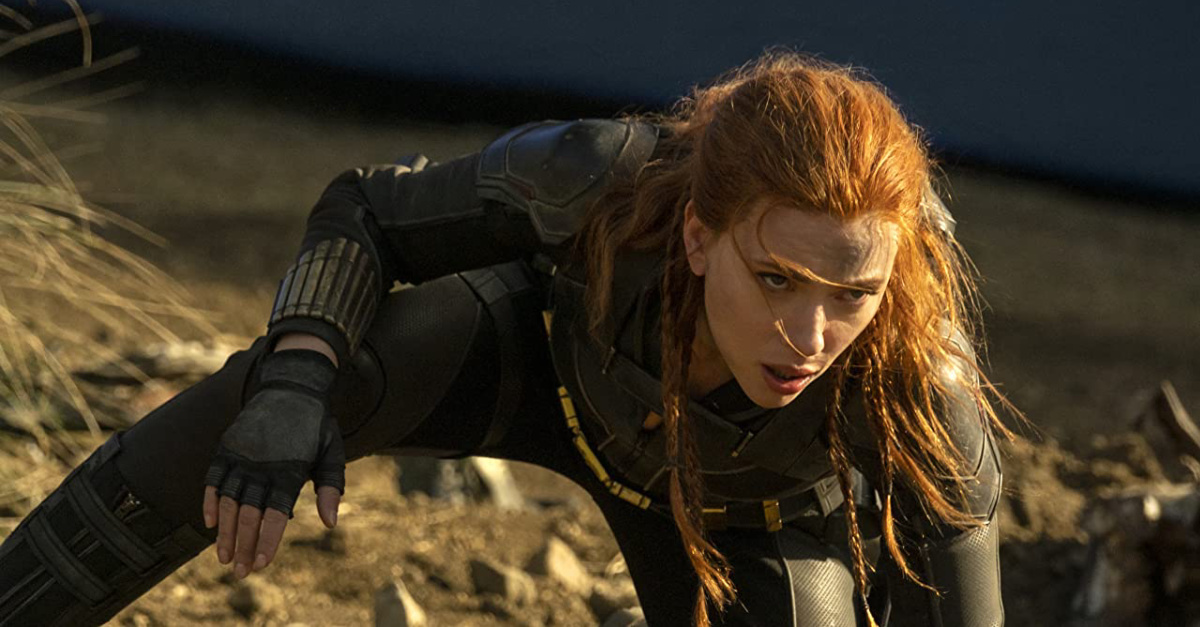 4. It's not for Young Children

Black Widow earns its PG-13 rating with its coarse language (see below for details) and violence.

The film opens with a gunfight between a man and the police. (Multiple cars crash, and a woman is shot.) The next few scenes show Natasha in intense hand-to-hand combat with a masked villain (whose mask resembles a skull), her sister (they eventually call a truce), and a legion of black widows. In the movie’s final moments, a male villain punches Natasha in the face three times, continuing a troubling and recent movie trend of men punching women. (Superhero movies often skirt this issue with karate-style kicks and wrestling-style movies.) The movie also includes mature themes of family separation. This one’s not for young children.

Overall, Black Widow is a worthy addition to the Marvel Cinematic Universe, even if it probably doesn’t rank among the very best films in that realm.