* Around the Globe *
The face on the Moon would be oriented differently at various times of the night.  The "top" of the Moon's face points toward the North.  So when the Moon is rising and setting, the face is tilted somewhat on it's side.

The Moon's orientation can vary in other parts of the world.  The tilting effect would be more pronounced in the Tropics, where the entire sphere of the sky appears to lay on it's side.  The Moon would appear to be "laying its head" on the horizon while rising and setting!

As we noted in a previous Update, the movie "The Passion of the Christ" is the only movie of note that accurately showed a Full Moon in the sky during the Passover, as it would be according to the Law of Moses.  And though this movie was excellent in so many ways, there was a goof with the face of the Moon!

The Moon's face was shown turned too far away from how it would appear in the northern latitude of Jerusalem.  The Moon actually appeared oriented as it might be seen in the southern hemisphere, not the Holy Land.  Interestingly, Mel Gibson grew up in Australia, and it may be that this appearance of the Full Moon looked natural to him!

As Moses said in the Blessing of Joseph:

In addition to the moonlight and the tides and the other things, we can surely add the Moon's face as one of those "precious things," as we will read of below.

* History of the Moon's Face *
Since ancient times, people have been able to find a face amidst the dark lunar features.  In the First Century A.D., the Greek philosopher Plutarch wrote a book entitled, "Concerning the Face Which Appears in the Orb of the Moon."  In an early observation of nearsightedness, Plutarch wrote:

"Dull and weak eyes discern not distinction of shape in the Moon but her orb for them has an even and full light, whereas those of keen and robust vision make out more precisely and distinctly the pattern of facial features and more clearly perceive the variations."

Plutarch's book was mostly concerned with addressing problems with the pseudo-scientific, Earth-centered notions of Aristotle.  This book is remarkable in that it reveals that the ancients were well aware of the inmplications of a Sun-centered cosmology.  However, they rejected this idea since it was not explainable by the erroneous physics of Aristotle.

Remarkably, no attempt was made to name the dark features on the Moon in ancient times.  The nature of the Moon's dark markings was a mystery for ancient astronomers, who believed that the celestial bodies were "perfect."  This notion, and the rest of the cosmology of Aristotle, collapsed upon the invention of the telescope.  It was in fact the Moon's face that hastened the demise of the ancient Earth-centered science.

Galileo was the first to observe the Moon's surface through a telescope.  In his 1609 book, "Starry Messenger," Galileo noted:

"From observations of these spots repeated many times I have been led to the opinion and conviction that the surface of the Moon is not smooth, uniform and precisely spherical as a great number of philosophers believe it (and the other heavely bodies) to be, but is uneven, rough, and full of cavities and prominences, being not unlike the face of the Earth."

In observing the dark features of the Moon, Galileo further remarked:

"As to the large lunar spots, these are not seen to be broken in the above manner... rather, they are even and uniform.... Hence if anyone wished to revive the old Pythagorean notion that the Moon is like another Earth, its brighter part might fitly represent the surface of the land and its darker region that of the water."

In this way, Galileo suggested the dark areas might actually be oceans or "seas" upon the face of the Moon.  Through a small, amateur telescope the Moon's "seas" do have a very soft, velvety appearance, different from the rocky, lighter areas.

The generations following Galileo latched on to the idea of lunar seas.  The first telescopic lunar atlas was prepared in the mid-1600s by Johannes Hevelius.  It was Hevelius who first gave individual names to these dark markings.  Following Galileo's observation, Hevelius named the "seas": 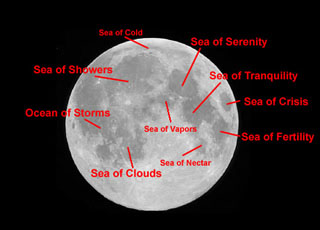 In the time of Hevelius, the idea of "life on other worlds" was very popular.  It was believed that the Moon and all the planets were inhabited by beings suitably adapted to live on these alien worlds.  In this modern era of spaceflight, we know that the Moon and planets are dead worlds.  The "Seas" are simply an illusion.  The Moon's surface is dry and dusty, and the dark "Seas" are actually areas of the Moon that are less-craggy that the lighter areas.

((((ACTIVITY))))
Have your homeschool scholars draw the Seas of the Moon and label them on the drawing.  And each month when the Moon is gibbous or full, try to learn to spot the Moon's face.  List how many Seas can be seen with the unaided eye.

Jay Ryan is the author of "The Classical Astronomy Update," a free e-mail newsletter for helping Christian homeschool families learn more about events in the starry sky. If you would like to receive the Update, please drop Jay an e-mail at moonfinder@mangobay.com.  Visit the Classical Astronomy web site - www.ClassicalAstronomy.com